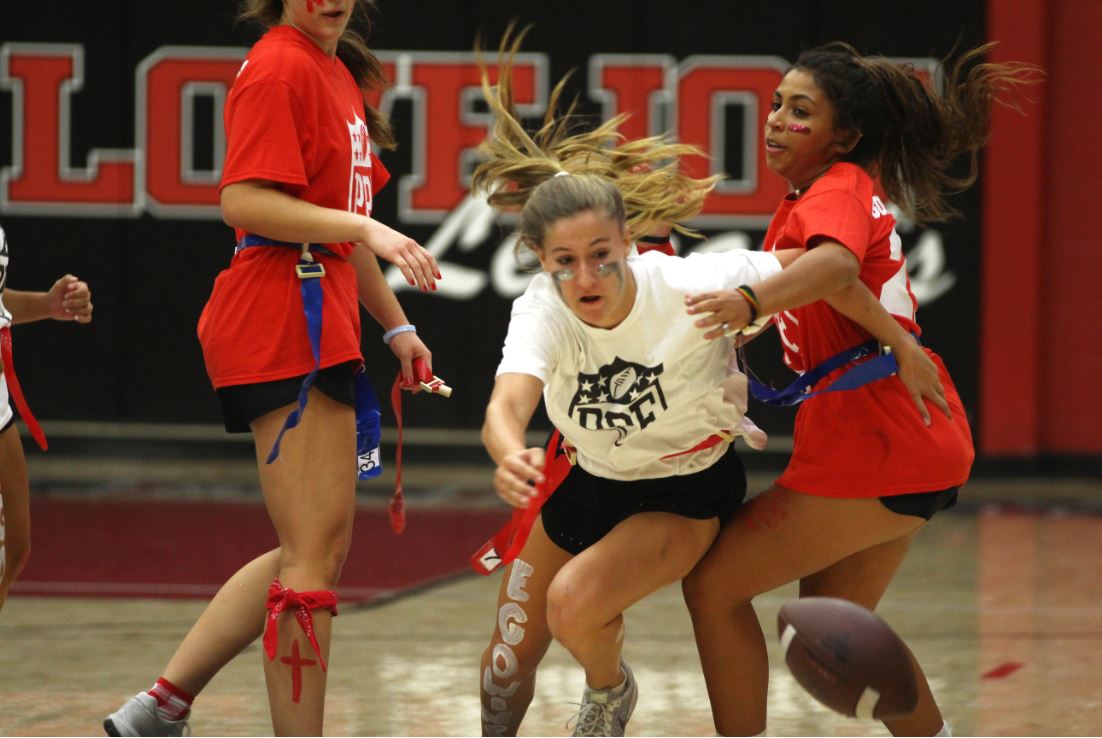 Senior Carsen Mcfadden sprints for the ball as junior Lydia Maashio attempts to hold her back in the first round of the 2018 LPPL games. (Grace Nguyen)

Senior Carsen Mcfadden sprints for the ball as junior Lydia Maashio attempts to hold her back in the first round of the 2018 LPPL games.

Thursdays are for the girls

Editor’s note: The reporting in this series is intended to be humorous and has been blown out of proportion for the purposes of entertainment.

It is said that everything is bigger in Texas, and if the Lovejoy Powderpuff League (LPPL) is any indication, this statement is quite accurate. After all, the ultra-competitive girls football league has nearly an entire school day dedicated towards its festivities. This year’s kickoff is slated for third period (10:40) on Thursday, Oct. 17.

Each year, the main gym is filled from top to bottom with rowdy students who are cheering on the premier sporting event in Lucas, Texas. While the main gym has been the venue for this event for many years, ESPN insider Adam Schefter reports that athletic director Jim Bob Puckett is working an agreement with Jerry Jones to host the event at AT&T Stadium next year.

In any case, the show must go on this year, and the competition on the court/field is as intense as it has ever been. Historically, bettors tend to favor the senior class’ odds to win the LPPL championship, and this year is no different. Win, lose, or draw, you can always expect the Class of 2020 to talk trash and play a gritty brand of football (their Twitter war record is actually far more impressive than their win/loss record).

Nevertheless, a new challenger presents itself each year, and it’s anybody’s guess as to who could pull off an upset. Grab some popcorn and an airhorn (just kidding, they aren’t allowed) and enjoy the comprehensive overview of each team’s roster and coaches that TRL’s inside analysts have put together.

After enduring three years of being labeled as the scrappy, sometimes controversial, underdogs, the senior class is ready to dominate the LPPL with sights on the championship title. With two second-place finishes under their belts, the class of 2020 is at a crossroads: are they a championship caliber team, or are they just the lovable losers? The seniors will returned a corps of seasoned veterans, including wide receiver Carsen McFadden and running back/defensive specialist Reagan Matacale. Both first-ballot hall-of-famers are predicted McFadden to eclipse over 500 yards of total offense and register a combined 100 points. As the clock ticks towards kickoff, we’ll see if the senior class can overcome their big-game demons and hoist the LPPL trophy.

The Class of 2021 did pretty much everything but win in the 2018 LPPL games. They took the Class of 2020 down to the wire in the first round, but thanks to some late game heroics from the Class of 2020 and home cooking from the referees, the juniors were the first ones to find themselves as spectators during the championship. All indications suggest that the coaching staff is confident in the direction of this team, but they have shown a tremendous ability to choke with the game on the line. But hey, new year, new Class of 2021. Only time will tell if the juniors can lace up and pull off an upset, bringing the infamous ‘senior curse’ back from the grave–just in time for Halloween.

Editor’s note: Due to scheduling conflicts, the coaches for the junior class were unable to make it into an interview.

Someone forgot to tell the Class of 2022 that getting destroyed in the regular season does not mean that you get a premium draft pick in the LPPL. To put it in more simple terms: last year didn’t go very well for this bunch. Nevertheless, the Class of 2022’s rookie season is in the past, and the sophomore class does have a history of pulling off upsets, (see: 2017) so don’t count them out just yet.

There are only three guarantees in life: death, taxes, and the freshmen getting obliterated in the first round of the LPPL playoffs. It’s a sad reality that no matter how hard these teams practice or how talented they are, they have never upset a senior class in the history of the LPPL. With that being said, Tony Romo highlighted one advantage the freshmen might have working in their favor this year. “There is no film on the freshman class, so offensive coordinator Harper Pool has no idea what schemes to expect from the defense,” Romo said. “This isn’t going to be a walk in the park for the team with the big egos.”