A tie for all occasions 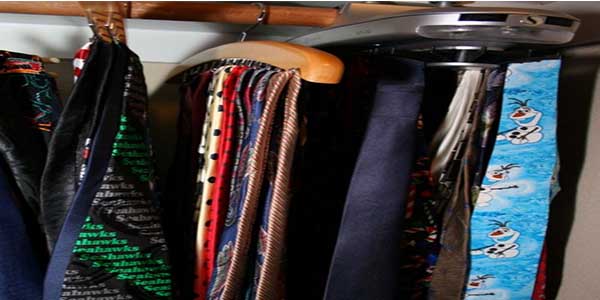 With a collection of ties hanging in his closet, English teacher Jasen Eairheart wears a different tie nearly every school day.

When AP Language teacher Jasen Eairheart began student teaching at Lawton, Oklahoma’s Eisenhower High School in December 2002, wearing a tie was just a way for him to distinguish himself from students. Now, after 13 years of teaching, Eairheart has expanded his collection to 129 diverse ties and counting.

“They separate me from the students,” Eairheart said. “I began student teaching/teaching when I was 21. I legitimately looked younger than some students. Wearing a tie ensured I was never stopped in the hall and asked for a hall pass.”

For Eairheart, the various ties served as his hall pass for years until his collection started growing.

“My collection began, sadly, with the passing of my grandfather. My grandmother gave to me all of his ties (all of which are professional),” said Eairheart. “These are the ties I wear at the beginning of the school year, the ‘professional ones.’”

After getting through wearing his collection of professional business ties, Eairheart moves on to the ones that really grab the attention of not only his students, but everyone around him.

“I didn’t start out with fun ties. I didn’t start out with any ties at all,” Eairheart said. “My first ‘fun’ tie, a Looney Tunes baseball tie, was given to me by my former boss. It belonged to her son, and he had since moved on to his own life, so she cleaned out his room and thought I would enjoy that particular tie.”

However, Eairheart has never actually purchased a tie for himself. All of his ties have come from either his mother or his students, the latter purchasing the majority of his ties.

“One year, I had a dating couple in my class, and they both raided their fathers’ closets and brought me 10 ties the last day of school,” Eairheart said. “I also had a former co-worker give me all of her husband’s fun ties as he had recently been promoted and was required to wear more professional neckwear. In the end, I figure that if I’m going to wear a noose around my neck, I might as well have fun with it.”

While the selection of his ties may seem random, there is a method as to how Eairheart chooses which tie he will wear that day.

“I’ll run through the professional ones first, and then move on to the fun ones,” Eairheart said. “If I think about it, I’ll try to match a tie to a special day (i.e. Dr. Seuss tie on his birthday). The tie comes first.  After that, nothing else matters.”

Eairheart used to run out of ties to wear during the first semester, but as his collection grew, he began to run out of ties later and later in the school year. Now, Eairheart runs out of his ties near the last week of school, saving his favorites for last.

“My favorites are Mr. Potato Head, Spongebob, and a multi-hued blue dolphin one,” Eairheart said.

Because he owns a surplus of ties, Eairheart has never worn the same tie twice during the school year.

“I don’t duplicate. It’s worn once and then disappears until next school year,” Eairheart said. “I have two ties that I do not wear: one has the words ‘Film as Lit today’ ironed on, which worked when I sponsored the Film as Literature club but would only cause confusion and delay (for the Thomas the Tank Engine fans out there), and the other is an ‘It’s a Boy!’ tie…which worked once….but now would just bombard me with a whole bunch of questions.”

Aside from the humorous and conversation-starter aspects that each of his ties carry, there is some actual value to be placed in Eairheart’s ties that may not be seen at first glance.

“I believe it aids in professionalism.  I’ve had multiple principals at each of the three schools I’ve been with (and even where I student taught) commend me for wearing them,” Eairheart said. “Students enjoy them, which is why I continue to do it.  If anything, it’s a talking point for the day.”

Eairheart’s six-year old daughter, Arwyn, has cracked the code as to why Eairheart wears ties every day.

“I think he wears them because he never wants to not wear them,” Arwyn said.

The ties, however, serve a different purpose to Eairheart’s students.

“Mr. Eairheart is definitely one of my favorite teachers because of his teaching style, his sense of humor, and because he works with you to get you the grade you want,” junior Baylen Roundtree said. “The fact that he wears an awesome tie every day is just a bonus.”