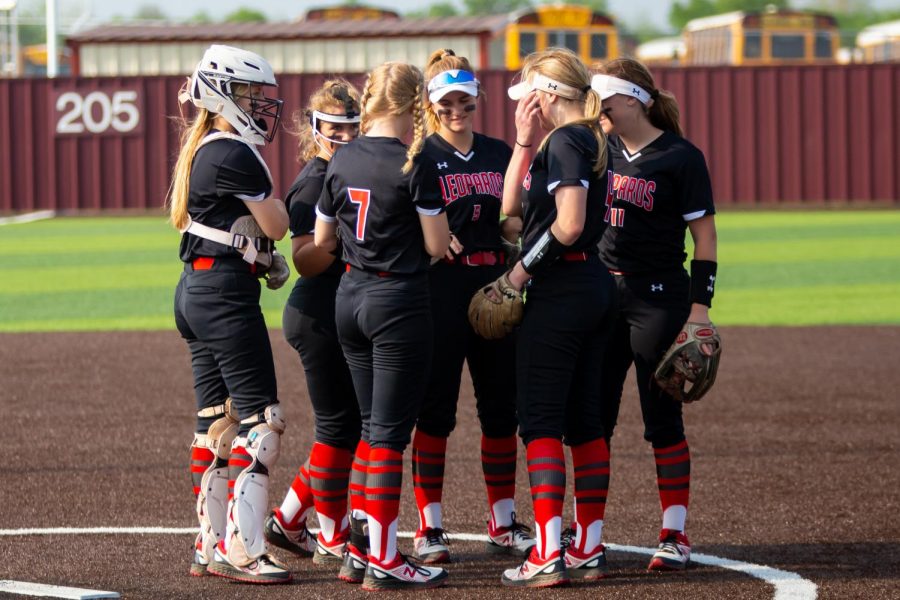 Sophomore catcher no. 3 Sydney Bardwell, junior third basemen no. 16 Emma Bittlestone, sophomore pitcher no. 7 Jade Owens, freshmen short stop no. 5 Skylar Rucker, senior first basemen no. 4 Holly Massey, and sophomore second basemen no. 11 Hannah Harvey stand together before the start of the second inning. The Leopards will play Frisco Wakeland tonight and tomorrow for the first round of playoffs.

Softball wins first round of playoffs

The softball team finished their district season in second place with a record of 12-2 and began the first round of playoffs tonight against 13-5 Frisco Wakeland.

“We are a very young team and finishing second in the whole district is very good,” sophomore Sydney Bardwell said. “Although we wanted to finish first, and it didn’t work out that way, we have an opportunity to get revenge in the playoffs and we are pumped for that.”

This season the team  focused on communication, as well as practicing offensive and running situations.

“The team has improved on communication, and we have gotten to connect with each other,” junior Bailey Bradshaw said. “We learned how to play with each other while making each other better.”

“We have improved so much since the beginning of fall ball. Our hitting has gotten extremely unstoppable, and coach Lopez has polished up our defensive skills perfectly.”

The team competes in three game series to start off the playoffs. After tonight’s game, the Leopards will play Wakeland two more times; tomorrow and Friday.

“Right now we just need to focus on taking it one game at a time from here, and work our way to the state tournament,” sophomore Hannah Harvey said.

“My mindset for the playoffs is to play for my teammates, especially the seniors,” Bardwell said. “[Making it to the playoffs] means we still have work to do, and our goal is to get to the next level, which is state finals.”