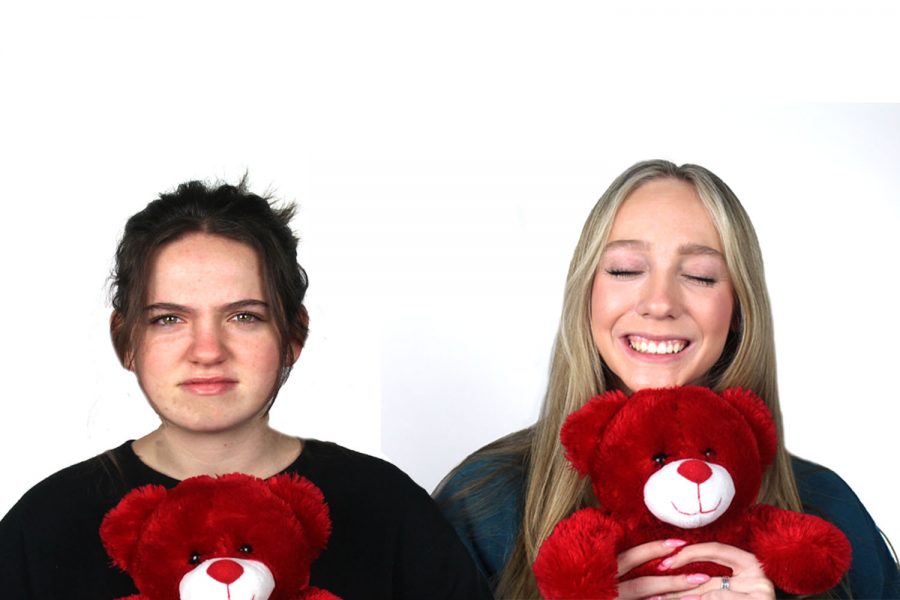 People experience Valentine’s Day in various situations: single and ready to mingle, happily single, taken and in love, taken and… not in love. But this year TRL’s Layla Healey shares why she believes the holiday is an overrated celebration, and Maddi Linsteadt shares why it offers something warm and fuzzy for everyone.

If I’m being honest, Valentine’s Day and Groundhog’s Day are tied for first for the most pointless holidays. We literally broadcast a groundhog-whose name is Punxsutawney Phil, which I just learned around a week ago, might I add- looking at his shadow on national television to see if winter will last longer. That’s besides the point though.

Valentine’s Day is a time to celebrate love and mushy nicknames and kissy-face fealty. The thing is though, the entire day, you’re either in a relationship and getting spoiled or you’re going through a “self-love” phase. There is absolutely nothing wrong with that, but celebrating being boo’d up on a random day in February versus celebrating yourself completely takes away from the ‘love’ in self-love. You’re honoring yourself because there isn’t anyone to do it for you. As harsh as it sounds, it’s true.

Maybe it is the history of “the 14th” that justifies this…

Or maybe not. From Feb. 13-15, the feast of Lupercalia was a Roman celebration where men would sacrifice a goat and a dog-and then whip women with the hides of the animals they had just slain. Romantic, right? Maybe it wasn’t that, and it was the death of two men with the name Valentine at the hands of ancient Roman Emperor Claudius II. Both beheaded and both a far stretch from why we celebrate this day.

I’m not saying that it isn’t nice to feel appreciated by a significant other, because it is. Receiving the occasional flowers or a cute handwritten note is always something that makes the butterflies in my stomach flutter. But Valentine’s Day makes this an obligation. It becomes a bouquet of flowers because he has to, or a letter with candy because she knows he is expecting something in return. If you want to celebrate your love for someone, use your anniversary. That is a specific day specific to your relationship.

And what about the single people? The entire day is just a reminder of that title. A lot of times, it is an insecurity. It doesn’t matter what social media platform you’re on, cute couple pictures will be everywhere and some corny hashtag will be trending. Let alone, stores decorate and advertise for Valentine’s Day right after the new year. That leaves over a month of constant reminders that yes, you are still single, and yes, this day still exists.

Yes, I understand that not everyone who is celebrating is in a relationship, and not everyone in a relationship is celebrating; there is Galentine’s Day and school parties where little kids pass out cards with candy to their classmates. But according to the National Retail Federation, all of these festivities are projected to cost around $27.4 billion, 37 percent higher than last year.

Again, there is nothing wrong with wanting to celebrate this day with your other half, but it should be a day to commemorate everyone and their cultures. It shouldn’t be a specific day with a specific title and a specific way to celebrate. We spend too much time trying to put meaning behind everything when, in reality, everyone deserves to feel loved and noticed year round, not just for one day. Happy “Valentine’s Day.”

To me, Valentine’s Day is a way to remind the people you love that you care about them. Whether it be a parent, a sibling, best friend or a significant other, it is a day dedicated to showing appreciation for all that they do for you. The chocolates. The cheesy stuffed animals. The heart candies. The roses. Those are all just big pluses.

I personally think that whether or not you’re in a relationship, Valentine’s Day is fun to celebrate. So what if you’re single for the holiday? Shamelessly binge watch rom-coms and stuff your face full of candies-that’s my thing at least. Treat yourself and share with friends.

It’s not always about going on fancy dates and spending big bucks. In a society where everything is centered around appearances (thanks, Instagram), sometimes it’s difficult to remember not only your own worth, but also to remind others of their own. It’s very easy to get into a negative mindset and start to compare ourselves to others, so a day like Valentine’s Day is a reminder that we should love ourselves and others for who they are.

A popular byproduct of Valentine’s Day is known as Galentine’s Day. A personal favorite of mine. The whole meaning behind this unofficial holiday is “ladies celebrating ladies”. So even if you are single and feeling a bit down, there’s always other people, like close friends, to celebrate with. Exchanging small gifts or even just taking a day to go out with friends means a lot to me, and I’m sure many others. It’s all about what you make it.

This holiday forces us to put down our phones and actually put effort into acknowledging the people we care for. It is so easy to post a picture or send a Snapchat to someone. But digital words are the cheapest thing you could give anyone. Valentine’s Day gives us a chance to show the people around us that we value them. Many people find joy in making cards and other DIY crafts for their significant others. Just knowing that someone took the time out of their day to make an effort puts that warm feeling in your heart. We have a full day to come face to face with our loved ones and truly express our gratitude for them.

There are many tales about Valentine’s Day, but it all comes back to a man by the name of Valentine literally dying for love. One legend (the best one in my opinion) has it that during the third century of Rome, Emperor Claudius II outlawed marriage because he believed that single men made better soldiers than those with wives and children. Despite this order, a determined priest named Valentine went behind the Emperors back and performed marriages for young lovers in secret. This risk taken for true love ultimately lead to Valentine’s death at the hands of Claudius II. Pretty romantic right? I guess, in a dark and twisted way. The things we do for love.