The holiday season comes around and the weather isn’t the only thing changing at school. Teachers find themselves spending hours working with their students creating the perfect door for the annual holiday decorating competition. With this years theme being ‘Disney Christmas’, teachers have collaborated with their students to create a spirited classroom entrance.

Editor’s note: Some of the reporting in this series is intended to be humorous, and certain aspects have been blown out of proportion for the purposes of entertainment. 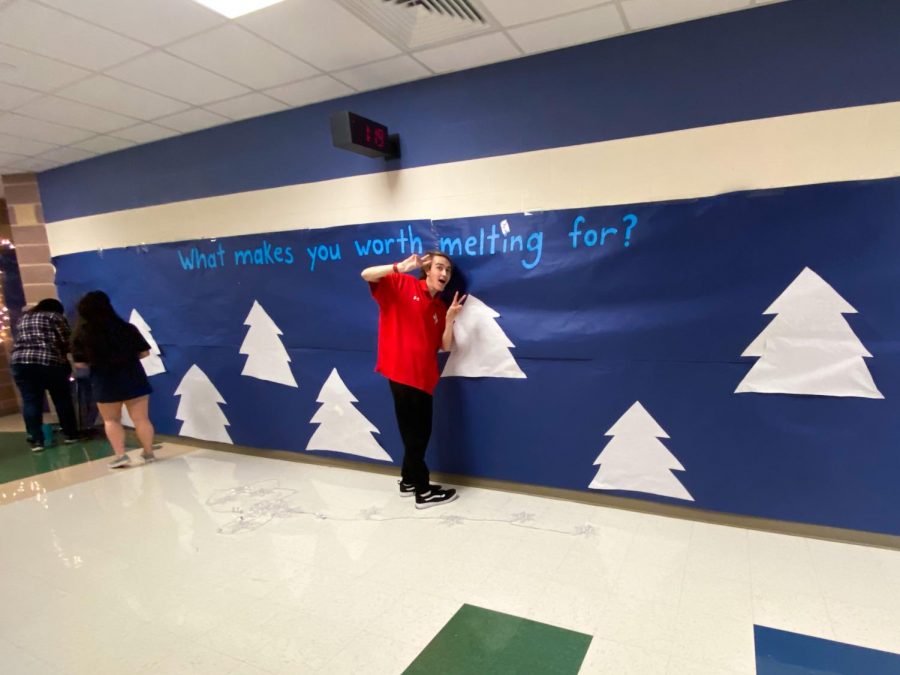 The life skills room is decorated with the theme of Frozen. They are having kids write why they are “worth melting for” on the wall of paper.

The Red Ledger: What’s the theme of your door?

TRL: How did you get the idea?

TRL: Have you participated in the contest before?

AB: This is my first year here so no.

TRL: Are you excited about the competition?

TRL: Who do you think is going to win? You guys?

TRL: Are your kids excited about the door?

AB: Our room is very excited. We are out there to win. 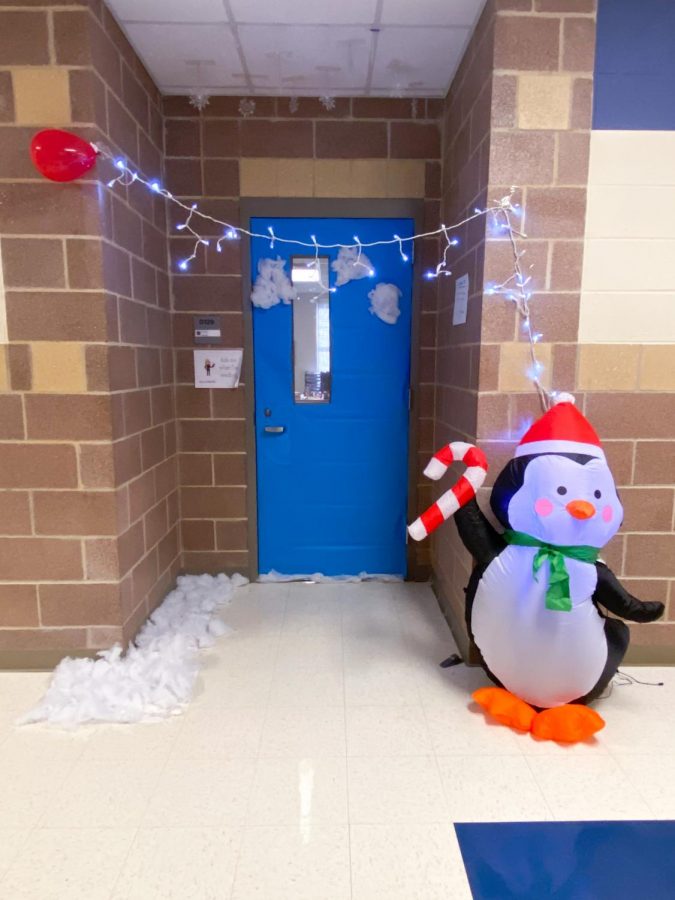 English teacher Amanda Arriaga’s door was themed “UP” and went off from there as her students came up with more and more ideas.

Amanda Arriaga: Well it was supposed to be ‘UP,’ and the idea went from there, and it’s taken several different directions, and at this time I’m not one hundred percent sure where we’re going to end up.

TRL: How do you think the students did on it?

AA: I think there’s maybe a few too many minds with different directions in mind trying to work on it together. We probably should’ve developed a plan together as a class and then set to work on it, but I just let them have free rein to do whatever they wanted and I think they’re having some growing pains.
TRL: What was the inspiration and who came up with the idea?

AA: They did, it was completely student led.

AA: Us for sure we are going to pull it all together.

TRL: Do you think Mrs. Syed shows as a lot of competition?

AA: I actually haven’t looked, but I’ve heard that hers is phenomenal and there’s absolutely no chance we are going to beat her which is not shocking, but I think hers is great. I also think Ms. Todd’s across the hall looks really nice too and I’ve seen her students working on it. 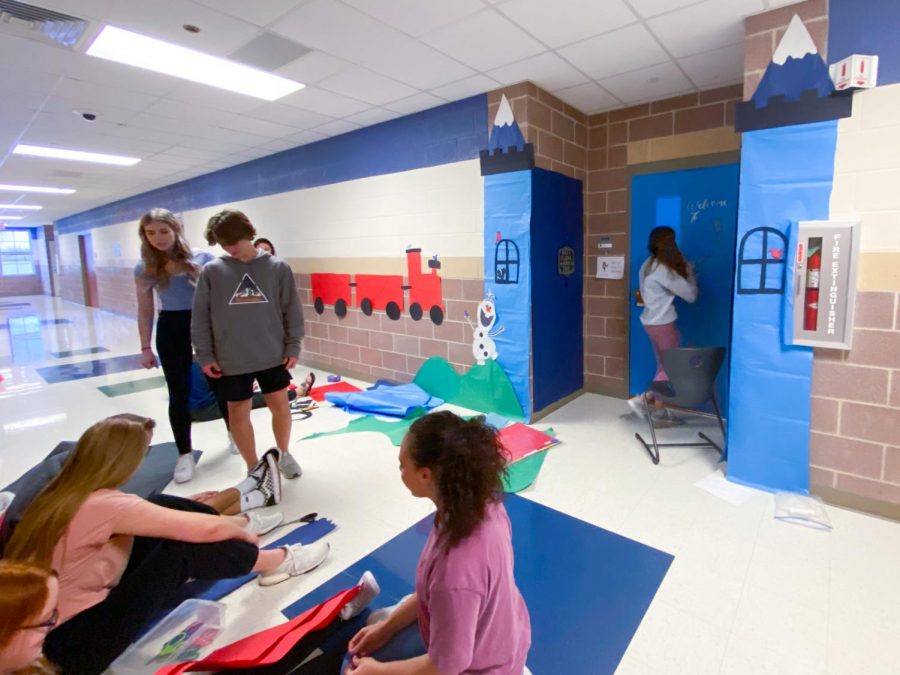 English teacher Courtney Todd’s door is themed around the Disney Castle, and the characters are going to a holiday party at Cinderella’s.

The Red Ledger: What is your door about?

Courtney Todd: We are going for a holiday party at Cinderella’s.

TRL: What was the inspiration for it?

CT: I think we started with the Disney castle, which you know is iconic, and there’s going to be a train that leads people to the castle.

TRL: How much have the students been working on it?

CT: I’d say whenever we had a little bit of extra time.

CT: Mrs. Syed is really steep competition, they have a really good one.

TRL: Do you think you can be a close second? 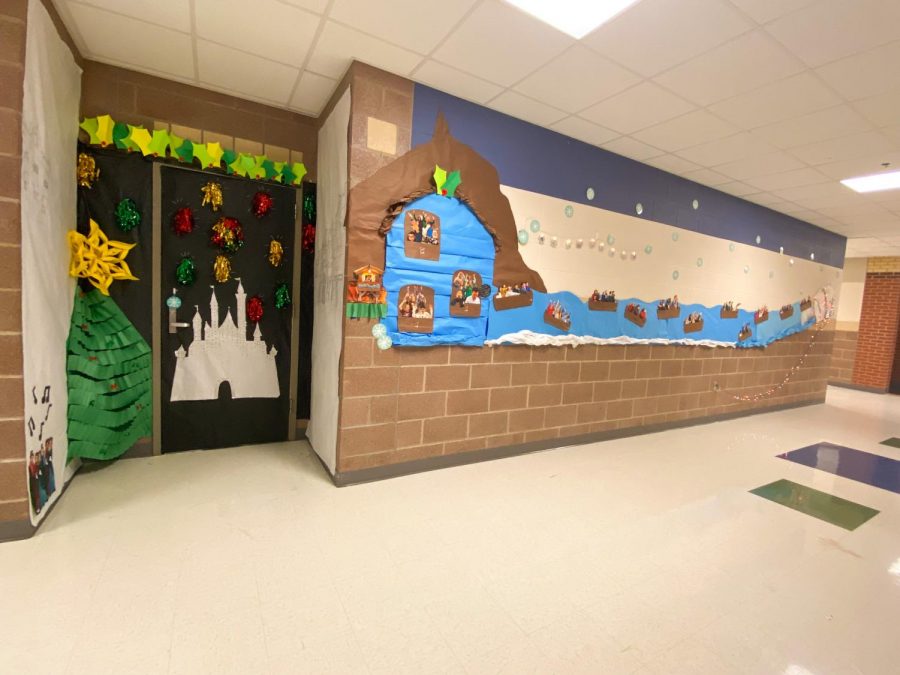 Science teacher Sadaf Syed’s door is based off of the Disney ride Splash Mountain. Syed has put pictures of many of her students on the ride.

Sadaf Syed: So the theme that they chose for the school was Disney Christmas. So, the first thing I thought about before Thanksgiving was the classic, iconic ride in Disney World or Disney Land is Splash Mountain. So I thought, well I can do it, so I started talking to my students and while I was talking I was like ‘how do I pose you on it,’ this that. Then I set up a little studio in my room and then after Thanksgiving when they came back. I had everyone get in groups of sixes, and over three days I took pictures of them posing. So then I cut them out, the pictures I took, and then made the little log and slowly but surely I got Splash Mountain up then I realized I needed some way to connect it to the door so a student of mine, Melody, drew Main Street in a perspective. And then I decided to look through Pinterest, and the sky’s the limit; you just start thinking, and then you just keep going and going.

TRL: Do you think the other doors are big competition?

SS: Oh I think the doors are good, I love the life skills room. First of all, they did such a beautiful Frozen themed door with all the life skills kids, and they wrote what they think is worth melting for so I thought that was just so sweet. And then of course Mrs. Hamilton’s midnight surprise which is her beautiful baby yoda door that definitely is going to win because it is so good.

TRL: So you think Mrs. Hamilton is going to win? 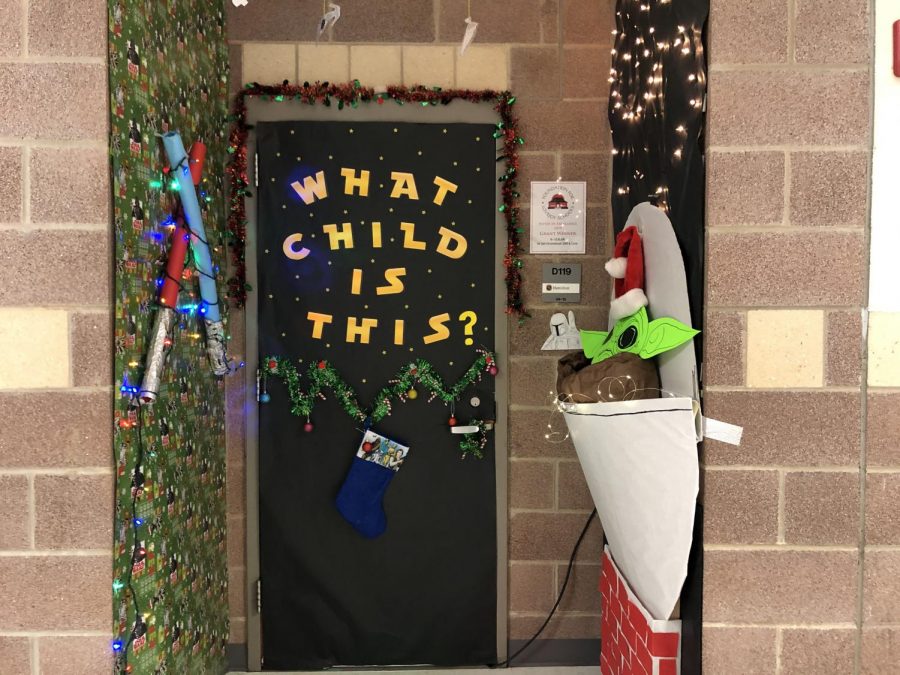 Lindsay Hamilton: It is Baby Yoda/the child but all inclusive of Star Wars, not just Mandalorian.

TRL: What was your inspiration for it?

LH: [Baby Yoda] is very popular right now, and Mandalorian and the new Star Wars movie comes out tomorrow at midnight and it’s Disney and Disney Plus came out and is a popular thing and Baby Yoda is the cutest ever so.

TRL: Which door do you think shows the biggest competition?

LH: Mrs. Syed’s for sure, hers is very impressive.

TRL: Mrs. Syed was worried about yours, do you think she should be?

LH: Yes I think she should be.

LH: Are there different categories? I thought there were categories. I don’t know. [Mrs. Syed] put in a lot of time and effort she deserves to win, but I feel like we deserve to win something.