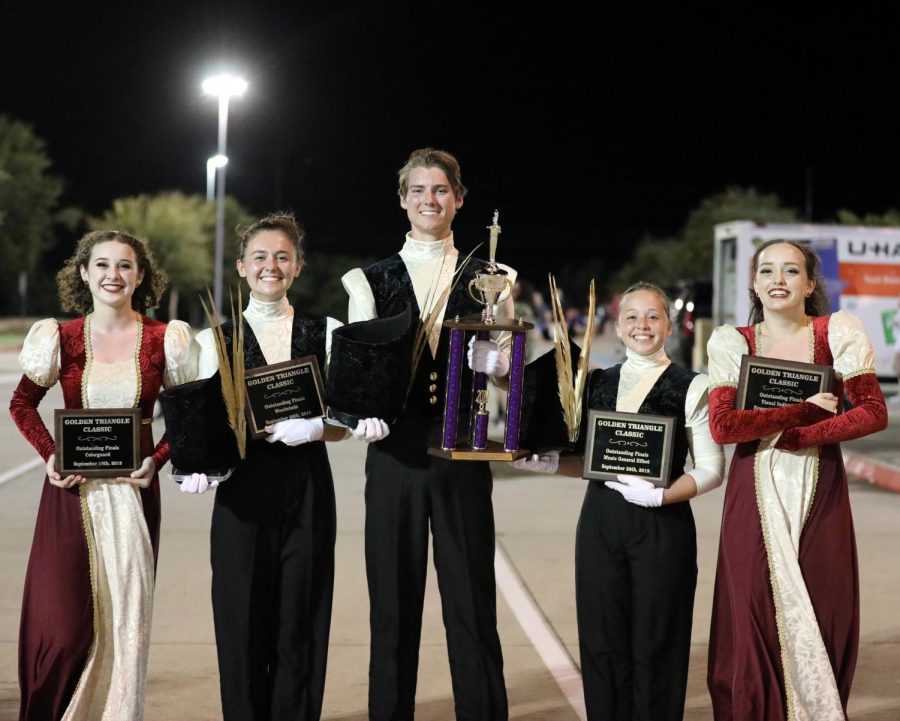 Get to know the drum majors

Seniors Joe Harris, Lily Hager and junior Catherine O’Brien served as drum majors for the 2019 marching band season for the show entitled “Juliet.” This year marked the end of Hager and Harris’ two-year drum major experience, but the end of the first year for O’Brien, who will return next year. This season the band won two first place titles at invitational marching competitions, received straight ones at UIL, and placed 6th at the UIL Area Competition.

If you were a fruit, you would be a: Banana

TRL: As a returning drum major, what’s it like?

JH: It’s a lot better because I know what I’m doing this time around. Last next was super stressful because everything was new and I just hated everything because I felt like I didn’t know what I was getting into. But now that I’m comfortable. It’s fun to be up there and lead everyone and be adventurous.

TRL: What’s it like conducting with two returning drum majors this year?

TRL: When did you decide you wanted to be a drum major?

JH: Freshman year, except that was more of a “why not?” type thing. I knew I was not going to get it, and little did I know that two years later I would be one.

TRL: How does being a drum major work with being in band?

JH: [The band trip to] Corpus [Christi] sophomore year for sure, that was like the cherry on top to a great couple of years of band.

JH: It was an incredible season. We accomplished things the band has never done before and it’s only up from here. Hopefully in two years they’ll get their chance to go to state.

If you were a fruit, you would be a: Peach

TRL: As a returning drum major, what’s it like?

LH: It’s been really cool to return because I’m coming back with a lot of ideas, and in my position I can make the band better. What’s really cool is that we’ve been able to change a lot of things. Because it’s our second year, we’re more comfortable. We know how we’ve traditionally done things, but we’ve also taken the liberty to change our tradition a little bit with just how we conduct and how we do some things as a team.

TRL: What’s it like conducting with two returning drum majors?

LH: To my knowledge, or at least for a long time, this hasn’t happened in Lovejoy, to have two returning drum majors. It’s been really cool to go through this together and give each other input, and we kind of have that mutual respect as returning drum majors. We had the exact same experience last year. We’re able to agree about what went well or what didn’t last year and then put together our knowledge to make things better for next year. Joe and I have different backgrounds and different strengths and together we are able to work well together.

TRL: When did you decide you wanted to be a drum major?

LH: I made a goal for myself freshman year to be a drum major by my junior year, and I didn’t think I’d make it. My freshman year, a drum major named Anna Turner told me to try out to just gain experience, which kind of blew my mind, but that was when I realized that it could happen.

TRL: How does being a drum major work with being in band?

LH: For one thing it takes a lot more hours. It’s a huge time commitment. It’s also like taking on a job that’s unpaid, but it’s willingly and it’s an honor, but it’s definitely another level of commitment and work. And being in the band as a marcher, I loved, and it also took a lot of commitment, but I think as a drum major I’m able to take it to the next level of the role that I can have, that the directors have put us in, that’s in a position to assist them and help the band.

TRL: What’s your favorite memory in band so far?

LH: I don’t know if I can pinpoint one memory that is my favorite, but I do remember some of the times that we’ve performed. It’s the performances that make all the time and effort pay off. Like when the whole band knows it was a good performance and just looks at each other at the end and we’re like, “That was good,” and that’s something that I’ve experienced both as a performer and a drum major.

TRL: What advice would you give to future drum majors?

LH: We go to all the camps and clinics to be a drum major, but they don’t really teach you how to be a drum major. Everyone does it differently, and you have to be self-committed, no one can give you that. Hang on and remember why you joined, and it’s always going to be worth it.

LH: I am so incredibly proud of each band member and what they accomplished this season. Being a part of this team has been one of my greatest experiences ever, and that’s not exclusive to being a drum major. What other activity gives students the opportunity to be part of something so big? Our band is the best band to walk these halls, as Mr. Heuer tells us. It’s a huge honor, and I’m so sad for my last season to be over.

If you were a fruit, you would be a: Mango

TRL: Why did you want to become a drum major?

CO: I thought it would be really cool to be one of the leaders in the group. We’re  such a great band, and to be a representative of such a great program is really awesome.

TRL: Why did you want to be a drum major?

CO: I saw my brother do leadership and had seen people in the past become leaders, and I thought that was really cool thing. Freshman year I actually tried out for drum major because of Lily Hager. She told me to try out and I was like, “Ok, I guess I’ll try it,” and I actually really loved it and I thought it was so fun, and I just really enjoyed doing it and conducting. I thought that it was really awesome and if I could just do that as a normal thing to do, so I tried out and here I am.

TRL: How does being a drum major work with regular band?

CO: Especially during marching season, we’ll stand and conduct while everyone else is playing, so we definitely get a lot less playing time. And even at home when I would normally practice, now I practice conducting or make click tracks. There’s lots of stuff that goes along with [being a] drum major that you don’t normally do if you’re just in band. For example, setting up speakers. It’s just a lot of preparing.

TRL: Do you think it takes more time?

CO: Absolutely, completely yes, because you still have to practice your instrument, you still have to do region. You definitely have to be here earlier and stay here later and do other things additional to normal.

CO: I think this season went really well this year. Although I know everyone was disappointed when we didn’t make it to state, I think we should still be really proud of what we’ve accomplished this season. This is the best show Lovejoy Band has ever had, and that is something to be proud of, let alone winning two highly competitive competitions. I know I keep saying I’m proud, but that’s because I really am. It’s been an absolute pleasure to work with and lead this family this year, and I can’t wait to see what we can create next season.