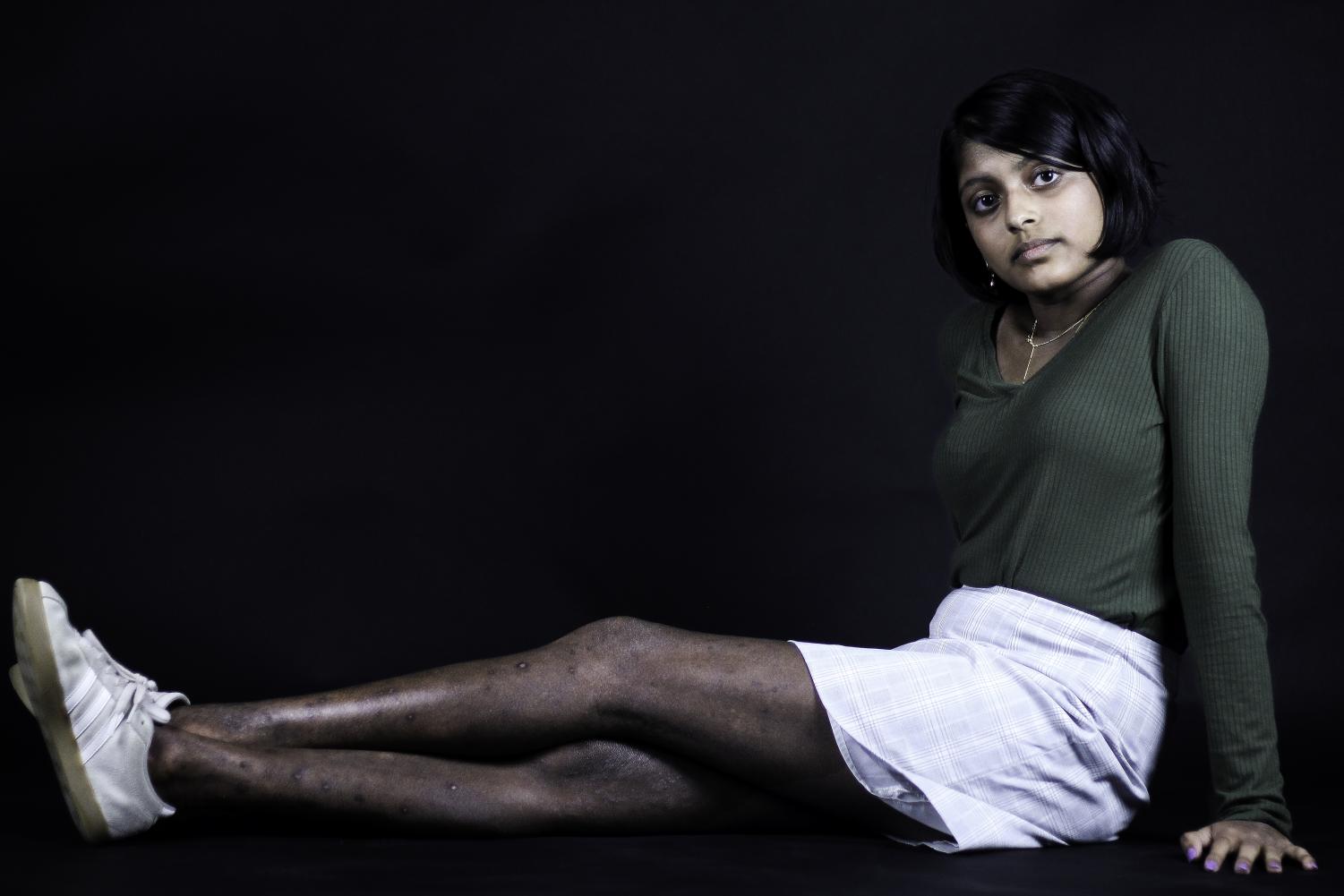 Senior Shivani Radhakrishnan suffers from an autoimmune disorder which caused eczema. This year she missed months of school to recover from “more than [she] thought imaginable.” (Kelsey Carroll)

Senior Shivani Radhakrishnan suffers from an autoimmune disorder which caused eczema. This year she missed months of school to recover from “more than [she] thought imaginable.”

LNN's Shivani Radhakrishnan shares her journey with an autoimmune disorder

I told my friends that I missed going to school.

They incredulously asked me, “You miss school?”

I missed my life. In fact, I was itching for it.

For as long as I can remember, I’ve been itching. Some people have been practicing a craft or doing something they love since they were little, but me? I’ve been itching. Since I was three months old, I have had an autoimmune disorder which caused the skin disorder eczema. As I’m nearing 18 years now, it’s been a while. A long while.

My diagnosis has given my mother a permanent furrow between her brows, dark circles under her eyes, lips knitted together in worry and nights fraught with sleeplessness because of my suffering. She has put me together piece by piece after numerous nights spent tearing my skin apart. She has remained strong even when I haven’t. But after 17 years spent roaming aimlessly between the doctors’ offices to the ER, it became apparent that this wasn’t sustainable.

Over the span of seven months, I have suffered more than I thought imaginable. I have foregone going to parties, spending time with my friends, even enjoying life, so that I can try fruitless treatments. I have put my body through myriad diets, holistic medicines, and steroid doses. I have seen hypnotherapists, Siddha practitioners, and Reiki grandmasters. By the end of August, when my friends were basking in the sun and documenting their sun-kissed lives on Instagram, I was missing my eyebrows and half the skin on my face from scratching. When I found out that I would not be able to attend the senior walk or even the first week of school, I realized just how much I had screwed up.

I was one of those students who put off “having fun” for my senior year. I stayed home from football games, afterparties, and sleepovers so I could study for my ACTs, SATs, APs and stay focused on getting into a good college. I had promised myself that I would enjoy my senior year, I would make those senior overalls with my friends, I would go to every football game, and I would enjoy my life to the fullest and for once, once in my life, I would forget about my impending future and just enjoy. I took so much in my life for granted by assuming I could always make up for lost time.

Little did I know, life had very different plans for me.

I had taken for granted the feeling of shoes on squeaky tile, the frenzied energy vibrating in the student section after the Leopards scored a touchdown… and the simplicity of my life.”

I missed it all, and I felt so stupid. I had taken for granted the little things, the things that mattered most. I had taken for granted the feeling of shoes on squeaky tile, the frenzied energy vibrating in the student section after the Leopards scored a touchdown, the sound of pens scratching across clean sheets of paper, the smiles of students after getting a good grade on a test, the booming voices of teachers lecturing during class, the midday haze when classes start to blur together, and the simplicity of my life. I had been so caught up in the idea of success– the idea that getting into a good college was the only thing that mattered- that I had forgotten the most important thing: to enjoy what I have when I have it. I’m sure I’ll enjoy college, but I’m in high school right now. Now’s my time, my only time, to go to football games, to go to homecoming and prom, to go on Whataburger runs at eleven at night. Now’s my time to do stupid teenager things that I can look back on fondly when I’m older.

At the beginning of October, I found a new doctor that prescribed me a new treatment plan. Slowly, my skin began regaining its glow.

The raw, angry, inflamed skin slowly knitted itself back together, hardening into scar tissue.

I started the healing process. Not just physically, but emotionally. I started going back to school. I started to feel happy, healthy and content.

Now that I’m back, I’m not stressing about my makeup work or the multiple tests I missed or college applications.

Instead, I relish in the little joys of life because when you can’t even do the simple things, you realize how important they are.

I relish in studying, in lunch periods spent in the courtyard with friends, laughing so hard we can barely breathe, in the routine of it all. Because these little things, they’re what made my life so delightful.

But most of all, I relish in stepping out of my car, trekking across the parking lot, opening the doors, and walking into school.

I still have my scars. They won’t fade easily, and of course, I’m still itching.

But now, I am no longer itching at life. I’m taking in every sweet and sour part of life, and just enjoying it.