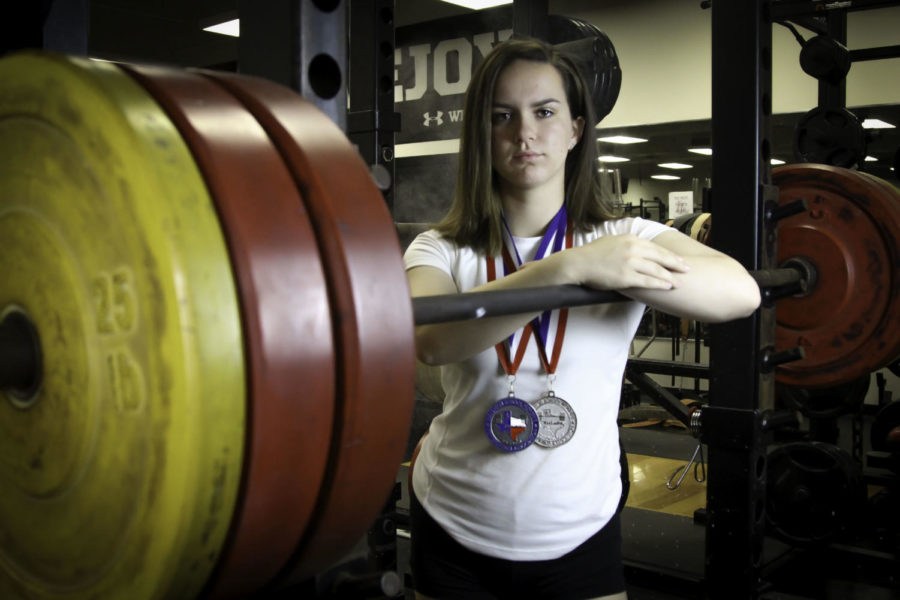 Senior Ally Carraway transitioned from volleyball to powerlifting and became the 5A state record holder in the bench press for her weight class this season.

Powerful performances are nothing new to senior Ally Carraway.

Last year, she broke a school record by becoming the first girl from the district to qualify for the 5A state powerlifting meet.

This year, she surpassed her own record by becoming the first girl to qualify twice.

Then, at this year’s meet, she pushed the boundaries of her strength even more by becoming the 5A state runner-up in her 148-pound weight class by lifting a combined weight of 945 pounds.

Powerlifting is the most taxing sport I have ever played, both physically and emotionally. Not only do you have to train your body everyday but on days like meet days you really have to learn how to stay calm and just trust your training.”

But in the bench press at state, Carraway proved to be the most powerful of all by breaking the 5A state record in her weight class with 225 pounds.

“[At the end of the state meet] I was so shocked and proud,” Carraway said. “It really felt like all the hard work had paid off.”

Carraway’s “hard work” included training during the off-season and regular season both at the school and then after school with one of her two gym memberships.

“Powerlifting is the most taxing sport I have ever played, both physically and emotionally,” Carraway said. “Not only do you have to train your body everyday but on days like meet days you really have to learn how to stay calm and just trust your training.”

A portion of her training has come from powerlifting coach Zack Smith, who coached Carraway for the past three years.

“He’s been able to help me with training and learning the discipline that I need to work every day to get stronger,” Carraway said.

Smith said Carraway has grown in many ways over the years.

“I have obviously seen her get stronger as she has gotten older, but one of the most impressive things that has gotten better is her competitiveness,” Smith said. “She is extremely dedicated and works very hard at being a good lifter. I have seen her mature into a fierce competitor and great technical lifter.”

Carraway’s strength stands out especially as she speculates many girls do not powerlift because they “don’t think they’re strong enough.”

“A lot of times when [they] first start out, [they’re] not going to automatically be first place,” Carraway said. “It’s just a lot of hard work, and I think some girls would rather do something that’s a little easier.”

Smith said Carraway is leaving a “great legacy” at the district’s powerlifting program.

“I hope that she is creating awareness that we do have a girls powerlifting team, and you can be successful with hard work and determination,” Smith said. “Ally is a great competitor, and I am so proud of her.”

Carraway’s determination was put to the test this season because at last year’s state tournament Carraway “bottomed out” at deadlift.

“If you don’t get a single lift in squat, bench or deadlift, it’s called bottoming out which means you’re disqualified from the meet,” Carraway said.

“I think last year’s meet prepared Ally for this year’s meet,” Smith said. “The outcome was not what we wanted, but she accomplished something by qualifying. Last year’s outcome motivated Ally to work and stay in lifting shape all summer and off-season.”

Because of last year’s outcome, Carraway tried to change her mindset for this year’s state meet.

“For junior year, I was really excited to qualify, and I didn’t have my mind set where it needed to be,” Carraway said. “This year I really had the mindset of, ‘I need to stay focused, try not to psych myself out, and just try to do the best I can do.’”

Carraway receives much support from her family who nicknamed her “Big Al” and encouraged her to start powerlifting her sophomore year.

“I was always kind of stronger than the other girls when I played volleyball, so when I quit playing volleyball, my mom suggested I do powerlifting,” Carraway said.

She’s always in the gym and always dedicated, and she is getting rewarded for it.”

“As a parent, there is no better feeling in the world than to watch your child reach her goals,” Angie said. “It was even sweeter reaching her goal during her senior year.”

“She’s always in the gym and always dedicated, and she is getting rewarded for it,” Abby said. “I always wanted to be in powerlifting with her, and I’m glad I got to do for the one year she’s left in high school.”

Ally is currently deciding among a few schools on where to continue her athletic and academic career. However, according to Angie, no matter which school she attends, their family “loves” the idea of Ally continuing her career.

“We feel [continuing powerlifting and competing at the college level] will give her goals, keep her physically healthy, and a sense of belonging,” Angie said.

“Because I’m releasing endorphins all the time, I’m happy most of the time,” Ally said. “I don’t get as tired as I used to because I have strong endurance. My overall quality of life is better because of powerlifting.”

Editor’s note: Additional reporting in this story is provided by freshman Carlee George.