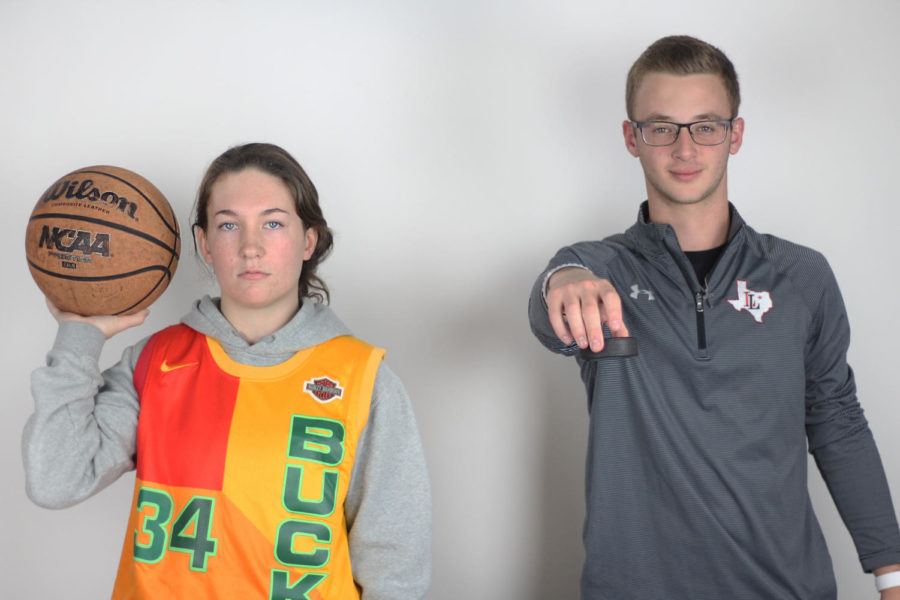 As the NFL season comes to an end and Major League Baseball reaches the heart of the offseason, the NHL and NBA seasons are just getting started. The two sports share many similarities: they both occur during the same part of the year, they both consist of 82-game schedules, and they both have the same playoff format. Not to mention, 11 NBA and NHL teams share arenas with one another. However, the two leagues have their differences, and two of TRL’s sportswriters are here to discuss the rationale behind which sport they find to be the most entertaining.

When I, a die-hard basketball fan, was first approached to write a piece in which I was to assemble an argument stating why the National Basketball Association was better than the National Hockey League, I was elated. I can’t help but feel like I have the upper-hand in this debate, as the NBA has all of the makings of surpassing the NFL, let alone the NHL, as America’s most popular sports league. So, for those of you out there who are hockey fans or just flat out hate yourself, don’t worry. I’m here to guide you in the right direction.

First things first: the fans. Right off the bat, this category diminishes any real threat my opponent still holds to winning this debate, because, simply put, the NBA has way more fans. Hockey just doesn’t have a hold on Americans the way other sports do. At least not since 1980. Not to say that it’s a lesser sport because of it, but the lack of American fans isn’t the exactly good for the NHL.

Year after year, the NBA Finals consistently racks up an absurd amount of viewers in comparison to the Stanley Cup Finals. Sure the same two teams have met in the last four Finals, but with that comes the creation of a sweet rivalry and the notorious  blown 3-1 lead that gave Cleveland its first ever championship, brought to you by none other than Lebron James. How’s that for a headline? I admit that hockey is the hardest sport to translate to a television screen, but in a world where not everyone has the luxury of commuting downtown to attend a hockey game on a Tuesday night, the NHL has to find a way to retain fans. In 2016, Sports Business Daily looked at the age of the television audiences of major sports. They found that in 2000, the median age for NHL fans was 33. In 2016, it was 49, which means the average NHL fan aged 16 years during that 16 year timespan. This insinuates that the NHL failed to bring in any new fans from younger generations, which is a problem. At the rate it’s going, the NHL is likely to cave when its aging fans fall asleep before the third period of the 7 p.m Flyers game.
This brings me to my next point. The NBA does an excellent job at being what it is: a business. The lengths the Association goes to in order to market its product and its players is astounding. Just look at guys like Lebron James, Steph Curry, Kyrie Irving, and even guys like Javale McGee and Joe Ingles. People know their names for a reason. It also helps that the NBA’s social media presence, specifically that of its players, is second to none, and without it, it would be comparable to, well, the NHL.

I concede that ESPN covers the NBA way more than the NHL, but it only makes sense. It all goes back to the entertainment aspect that the players bring to the table: whether it be Drake mouthing off to Steph Curry on the sidelines every time the the Warriors visit Toronto or Joel Embiid claiming he “owns real estate in [Andre Drummond’s] head” on Twitter. Our society idolizes professional athletes, and the NBA is there to profit off of that obsession. As for the NHL, the average person might be able to name Wayne Gretzky. Maybe Sidney Crosby. You see my point.

Again, it has to do with a certain kind of “intimacy” between athletes and fans in the NBA that the NHL simply cannot match, just by the pure nature of the sport. In the NHL, there are helmets, masks, and a literal wall separating you and your favorite player, where as an NBA fan might get a high five, selfie, or even an autographed jersey from their favorite athlete. And if you’re really lucky, Kevin Durant might even tweet you.

Let’s keep it going. The NBA pays its athletes more money. It has way more diversity and teams have a growing impact on their community through NBA Cares. It’s safe to say that the NBA keeps its teams, coaches, and players relatively happy. The league doesn’t subdue the voices of its players or prevent them from actively using their platform. NBA commissioner Adam Silver does not have the brewing hatred against him like that of Roger Goodell (NFL commissioner) and Gary Bettman (NHL commissioner). Let’s not forget that the NHL has experienced multiple lockouts in the recent past.

The Association prioritizes the safety of its players, which the NHL has failed to do, especially regarding the pressing issue of concussions. Bettman is actively fighting lawsuits from retired hockey players about the safety protocol of the league. And get a load of this: Bettman has gone to great lengths to try and question evidence linking head hits and injuries to brain trauma. You’re kidding me, right? The NHL’s archaic air of rugged manliness and toughness is doing more harm than good when it comes down to the health of its current and former players.
My only concession is the fact that, to me, hockey is a far more difficult sport that requires an entirely different level of skill than basketball does. Those guys can lose teeth and break out into massive brawls and it’s just another day on the ice. I respect it.

Yet, just because its athletes may be “tougher” and more skilled, does not mean that the NHL is automatically better or more entertaining. In my opinion, watching Russell Westbrook throw down a nasty poster or Chris Paul ruthlessly cross-up his defender is just as entertaining, if not more so, than two or three goals that take place during the span of a three hour hockey game. But to each their own.

Overall, the NBA has continued to show its dominance by adapting to the new, more entertainment-based era of sports, which includes marketing its players over teams (something the NHL is seemingly unable to do) and keeping the fans connected. So while there are some unique aspects that make the NHL intriguing to a select few, the NBA continues to successfully captivate all audiences and show that it’s truly “bigger than basketball.”

Stickin’ it to the NBA

I know I’m arguing the marginal case here. I wager that if you surveyed 10 students at the high school, nine of them would say they prefer the NBA to the NHL.

Contrary to popular opinion, I find the NHL to be a far more entertaining sport to watch for a variety of reasons.

There is no denying that the NBA is a star-driven league. The worst team in the league can be instantly transformed into a perennial championship contender by simply acquiring one high-octane player.

This is certainly exciting if you happen to be one of the select few teams that LeBron James or Kevin Durant chooses in free agency every other year, but if you’re just a casual fan hoping to watch competitive gameplay, this is clearly the wrong sport for you. Sure, people can’t get enough of the signature shoes, gimmicky commercials, or excessive paraphernalia, but these are precisely the aspects of the NBA which I find to be the most repulsive.

Players wield way too much power in the league, and their personal reputations completely undermine any accomplishments of their teams. But then again, the “Super Team” era of the NBA (where star players opt out of contracts for their original team in favor of forming an all-star team for a different organization) demonstrates that the entire value of “team” is receding faster than LeBron’s hairline. Did I forget to mention that the NBA Finals have featured the same two teams for the past four years? Where’s the fun in that?!

On the other hand, the NHL offers a far more competitive palette of teams. Every year, new teams make the playoffs, and new teams win championships.

Take a look at the Vegas Golden Knights a year ago. In their inaugural season, they managed to reach the Stanley Cup Final and were a tremendous Cinderella story throughout the year. These are the kinds of stories sports are all about—fans should desire new and exciting competition rather than monotonous slugfests year after year.

Another dynamic to consider is all 18 skaters (and the goalie) on an NHL team play an integral role in the outcome every game, whereas in the NBA, the same five players are essentially relied on for the entire game.

The NBA has its stars while the rest of the team rides the pine the whole game, but the most unlikely heroes can arise in the NHL in the biggest moments. In fact, each player’s shift lasts about 45 seconds before they are replaced with fresh legs, so opportunities are plentiful for under-the-radar players to establish themselves.

Furthermore, the NHL gameplay is far more exciting than that of the NBA.

Every time a goal is scored, players and fans enter a frenzy of celebration because every goal is at a premium and could very well be the deciding factor of a game. Meanwhile, in the NBA, where more than 200 total points are scored each game, scoring is regular and less exciting.

Even in the the scoring droughts of an NHL game, the average fan can still be entertained when a goalie makes an acrobatic save, a defenseman sacrifices his body to block a 100 MPH rocket shot, or a forward dishes a vicious body check to free the puck. In the NBA, if a ball doesn’t go in the basket, the shooter simply missed his shot–there’s not a whole lot more to it.

The nonstop action in the NHL occurs with very few stoppages, unlike the NBA, where there is an average of 20 fouls per game, and the ball regularly goes out of bounds and impedes the pace of play.

Another thing to consider is that, well, hockey is actually a physical sport.

In the NHL, there are more than 40 hits per game, there is pushing and shoving, there is aggressive defense, and there is fighting. In the NBA, defense is nonexistent. You can literally touch someone and be called for a foul.

Furthermore, the NBA regularly issues fouls for players who disagree with the referees, and in some cases, fouls are even called on the coaches. This ridiculousness strips the game of its passion and fosters passive gameplay.

One last comment on the overall gameplay: if a team in the NBA is attempting to surmount a comeback, the only way to do so is by fouling the other team repeatedly in the final two minutes and hoping the other team misses its free throws. Fortunately in the NHL, these gimmicky strategies are not present. In the final two minutes of a hockey game, the team that is trailing will pull its goalie in favor of adding an extra attacker. The result? Absolute chaos and excitement as one team tries to tie the game with a man advantage while the other team tries to seal the deal by putting the puck in the empty net.

The reality is, I would much rather see the best players leaving everything they have out on the court/ice in the final minutes instead of watching a perpetual series of million-dollar athletes bricking shots that seventh graders practice in their driveway. I’m looking at you, DeAndre Jordan.