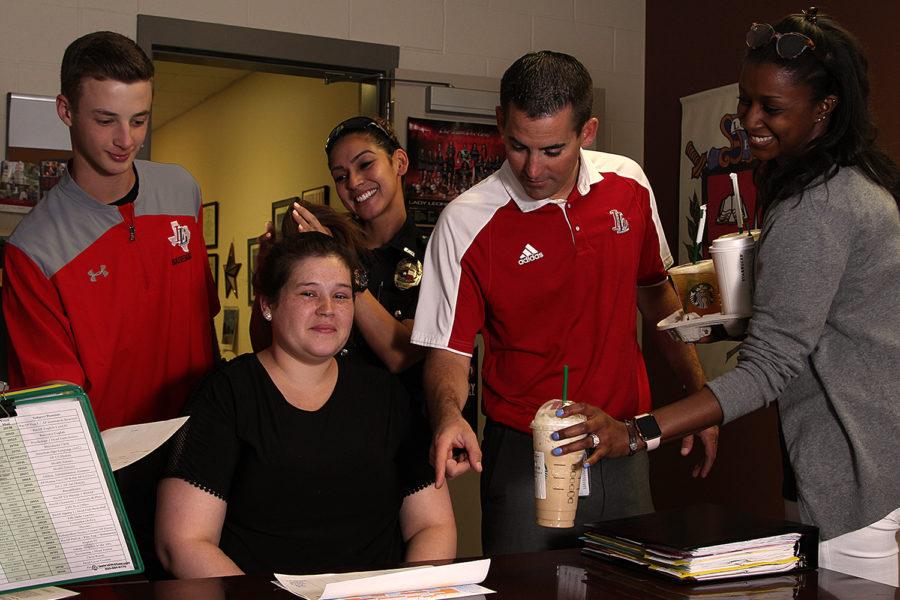 Administrative assistant Natalie Buster deals with the stress in the office along with relieving the stress of her massage patients.

She’s an expert at bringing relief and aid to chaotic situations, whether she’s acting as the “hub of the school” for students and staff or treating stress and pain for her massage therapy clients. Administrative assistant to assistant principals Natalie Buster has always had a passion for helping others and has put that passion into use for over five years.

“When I first started, I worked for massage places, but I’ve really focused on people who had problems areas or people who needed therapeutic work,” Buster said. “I also focused on athletes–any athletes who need sports work. I just have a connection with them. So I’ve done volunteer work in Fort Hood for soldiers [and] families who are less fortunate. They had NFL players who came down to teach kids how to play football, and I massaged the NFL players.”

Although Buster is secure in the professions she has now, she did not know what she wanted to do with her life after she graduated high school.

“I thought maybe medical field, I thought maybe education–I thought a whole bunch of stuff,” Buster said. “But I always thought I wanted to be everything, so a little here and a little there.”

Buster studied to become a certified nursing assistant and received her certification. But she was not satisfied with being unable to work inside the hospital, which was her dream.

“When I had just gotten out of high school, I went and took the certified nursing assistant program and got my license and found out I couldn’t work in the hospital,” Buster said. “I’m not opposed to the nursing home, but I wanted to get a step in the door at the hospital and they would not allow that.”

Buster decided to move on and obtain her medical assistant certification so she could work  inside the hospital. This led her to plastic surgery.

“As a medical assistant in plastic surgery, my job was to help the plastic surgeon during operation,” Buster said. “I worked front desk, I worked in the back. I would consult patients I would do everything. I would prepare the operating room.”

In 2010, Buster moved to Fort Hood and attended New Beginning School of Massage Killeen. While in massage school, Buster took a 500-plus hour program while doing 250 hours of internship massage. After she passed the state test, she received her license in massage therapy.

“When I went to Fort Hood, it was strictly football players, but when I worked for the massage place, I worked with all athletes, including soccer [and] hockey, that would come and see me to get worked on,” Buster said.

Buster earned administrative services experience when she worked as the office manager at New Beginning School of Massage Killeen. Buster said she came to Lovejoy because of the similar environment. Assistant principal Julie Hirsh said that Buster is the “hub of the school” for all of the staff and students during the day and is probably one of the busiest people on the campus.

“Ms. Buster basically keeps us all sane here in the front office,” Hirsh said. “She sees any students that come in for any reason at all–anyone that gets called to the office to see an administrator for any needs–and any office manager for any needs all come to see Ms. Buster first. She’s really multitasking a good four or five things at all times throughout the day.”

Although resource officer Tori Fritzler has not known Buster for a long time, she considers her a good friend. Fritzler said she was impressed when Buster told her she still did massage therapy on the side.

“I just started this year so I just got to know her, but we clicked really quickly,” Fritzler. “While talking to her, I’ve gotten to know her a little bit better in what she’s done before this. She’s a multitasking machine, and she’s good at what she does.”

Buster said she has a strong passion for massage therapy, and that is why she still takes time to do it on the side at Massage Green in McKinney, although her schedule keeps her very busy.

“The thing I enjoy most about my job as a massage therapist is helping clients who have issues, and most of my clients were athletes and some of them had car accident injuries, hip injuries, and to focus on that area I was always able to help to heal them,” Buster said. “I love being around people and helping people.”