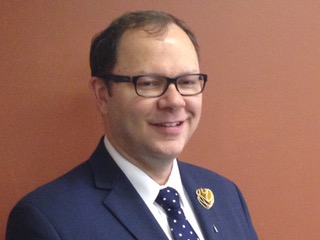 Editor’s Note: Below is an interview conducted by phone with Republican candidate David Niederkorn as a part of The Red Ledger’s look into the candidates of the race for Texas’s District 3 seat in the House of Representatives. This interview has been edited for length and a copy of the full interview can be found here.

The Red Ledger: President Trump has proposed building a wall on the U.S.-Mexican Border. What is your opinion of that?

David Niederkorn: The border in question is approximately 2,000 miles, and the current proposal as I understand it would have about 1,200 miles of that being walled and the remaining 800 miles or so being secured by other means. That seems very reasonable. There are solutions beyond securing the border, of course. The H-1B visa program needs to be totally overhauled and actually monitored. It’s a package to do, but to answer the question directly in case I wasn’t clear, of course we need to secure our southern border.

TRL: Which scenario with DACA would you most like to win out?

DN: Those 1.8 million that Mr. Trump has labeled as eligible, which is twice as much as Mr. Obama had declared eligible, are people who grew up in this country, and yes, they entered illegally, but they came here as very little children, they grew up here, they speak English, this is their home. We’ve already put public money into educating them, from lower schools to high school and even college education, and they are now a productive part of our society. The idea that social security is about to go broke because we don’t have enough workers, yet we’ve invested all this money in training these people, and now we want to kick them out, is a little short-sighted, so of course we need to work something out for these people, no doubt about it.

DN: This will seem to some people as a bit of a sidetrack from the issue, but the real problem to me when I hear that question is that we as individuals are paying federal tax dollars that get accumulated in Washington and then get distributed to the states and to big cities. More directly to your question on the current system that we have, the idea of a federal law being violated via sanctuary cities, especially when you’re dealing with criminal courts and gangs like MS-13, and you’ve got cities saying they’re going to protect these people, that of course is ridiculous, and that of course needs to be controlled any way it can be.

DN: I am pro-life. I have a theological position and a philosophical position on life. Aristotle, the Ancient Greek philosopher, figured out 400 years before Christ just by using his reason that life begins at conception. And you look at the Bible and it’s clear: life begins at conception. Of course there are real situations where you have to let families make decisions, but that’s the exception that proves the rule. When the life of the mother is truly on the line, then that’s a decision for that family to make. Beyond that, we can get into a few other things, but I don’t really think Congress should be dealing with these kind[s] of details in people’s lives. If I’m a U.S. Congressman, why do you want me deciding this issue for you? That should be taken care of by people much closer to the situation. But the life of the mother is an obvious example. We can fine-tune and debate and put a few others on there if we need to.

TRL: What would you say is your general stance on healthcare?

DN: On healthcare, I make some arguments where I start to lose people, and that’s because I’m actually looking at health insurance because that’s the first mistake that we made. We have let the conversation become so convoluted that few Americans actually distinguish anymore between healthcare and health insurance, and they are not the same thing. Healthcare is a product that you buy; health insurance is a means of paying for it, just like if you go buy something at the grocery store you can pay with cash money or with credit card. We’ve confused healthcare and health insurance. We’ve also let health insurance become so all-encompassing that it’s way more than it was ever intended to be. It’s gone to the point where everytime you go to the doctor you have to pay $10, and [your] health insurance pays for it. But health insurance at that level costs a lot of money. We would be much better off if the majority of healthcare was paid for by the patient when they receive the coverage. Now, obviously, there’s a distinction to be made between people who are truly and deeply poor and need help, but most American families, most, can budget for the average healthcare need.

TRL: Texas has recently passed various laws permitting open carry of firearms. What is your opinion on that and open carry in general?

DN: Politically speaking, I will refrain from an opinion on that, and I’ll tell you why: I am running for United States Congress. I am 100 percent certain that what the second amendment says is that we the people of the United States, who wrote this Constitution, are telling you, the federal government, that you can’t say anything concerning firearms. Nothing. Now, the tenth amendment then says that power not given to the federal government is reserved for the people and for the states. States are sovereign, so if the people in the state of Texas were to pass open carry laws, they are certainly free to, and the federal government is not free to interfere with that in any way. As a U.S. Congressman, the second amendment  keeps me from addressing firearms at all.

TRL: What is your stance on student loans?

DN: The problem, big picture, with student loans and government financing of higher education is that it has done two things: it has driven the cost up, and it has driven the quality down. Because what happens is all of a sudden when college is automatic for everyone and everyone has the money, there’s a huge demand, so the cost goes up. The notion that every single person alive has to go to four years of college has really just dumbed down college. What we’ve done is push[ed] everything up. What young people today are learning in college is what 20 years ago they learned in high school.

DN: In Texas, you only get to vote in one primary. You have to pick Republican or Democrat. So, I’m 18-years-old, and my personal convictions and principles have told me that I want to vote in the Republican primary, or maybe I’ve realized that Collin County is 60 percent Republican, so whoever wins the Republican primary is going to win the November general election, so I’ve decided to cast a relevant vote. So now I’m looking at the Republican primary for U.S. Congress– what’s important to me? I’ll tell you, you’ve really got to look at the person. And that involves both their own history, where they’ve been, what they’ve done, why they’ve done it, and you’ve also got to look to at the policy agenda. If you’re a first time voter, then you want to elect someone that will actually represent you in Congress.

TRL: What do you think could draw Democrats to your campaign?

DN: I’ve talked to a lot of Democrats who tell me that, come November, they’re going to vote Democratic because that’s who they really are, but they’re going to come and vote in the Republican primary. Democrats are going to look at my principles and my policies and not agree with some of it, but if you look at the four main things that I’m running on, if you look at how to fix Congress, how to fix social security, how to fix the VA, how to fix our tax code, those are pretty universal things. There’s nothing in the way I talk about the dysfunction of Congress that is exclusively Republican and a Democrat couldn’t embrace. There’s certainly nothing in the way that I talk about fixing social security that the Democrats couldn’t embrace. There’s nothing in the way that I talk about fixing the department of veteran affairs that a Democrat couldn’t embrace, and arguably the same with tax code. Now, if you look on my website at the 13 other issues, I’m going to lose Democrats there because I’ve got some pretty strong statements on marriage, abortion, climate change, things that Democrats are going to be appalled by.

TRL: Regardless of the outcome, do you think the November election will act as a sort of referendum on the current administration?

DN: No. That’s a myth created by political pundits. That’s all the work of political scientists and the pundits who want to try to create that. So no, the answer to that’s no.