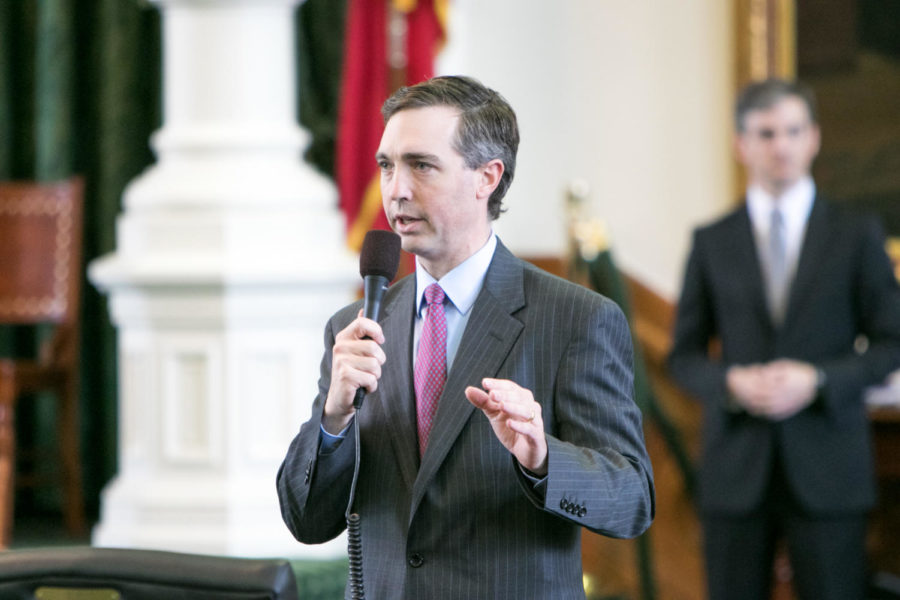 Editor’s Note: Below is an interview conducted by email with Republican candidate Van Taylor as a part of The Red Ledger’s look into the candidates of the race for Texas’s District 3 seat in the House of Representatives. This interview has been edited for length and a copy of the full interview can be found here.

The Red Ledger: President Trump has proposed building a wall on the U.S.-Mexican Border. What are your thoughts on this?

Van Taylor: As a United States Marine, I served on the United States/Mexican border as part of Joint Task Force 6 and know it is not secure. In the Texas Senate, I used this background to pass important legislation granting Texas military personnel legal safeguards to protect themselves while being called upon to serve our state. I doggedly supported increasing border security funding at the state level and have also consistently fought to turn off the magnets that further entice illegal immigration. In Congress, I will continue to fight for meaningful safeguards on our borders and reject amnesty.

TRL: What is your general stance on DACA?

VT: I look at immigration and see three specific issues: border security and stopping the inflow of illegal immigration, legal immigration, and what to do with illegal immigrants currently in our country. I believe the best approach is to address each of these problem sets in separate, more manageable bills that tackle a specific problem while allowing for adequate debate and time for the public to engage in the solution.

VT: Releasing criminal illegal immigrants back into our communities in clear violation of federal law is unacceptable and dangerous. I was proud to coauthor and help pass Texas’ ban on sanctuary cities, taking an important step towards stopping rogue elected officials from ignoring the rule of law and putting our families at risk in the pursuit of their own misguided agenda.

VT: Contrived in backroom deals and riddled with broken promises and false hope, former president Barack Obama, Nancy Pelosi, and their allies in Washington forced on the American people a $1.7 trillion takeover of our healthcare system. While plunging our nation further into debt, Obamacare has most harmed those whom the law was supposed to help. Leaders in Washington must repeal Obamacare and empower the states to create free market-based solutions that provide Americans access to healthcare they can afford from a doctor they trust.

TRL: What is your general stance on open carry?

VT:  In the state legislature, I have fought the skyrocketing cost of college and universities in Texas. Also, as a member of the Nominations Committee, I sternly addressed university regents who increased administrative salaries immediately after the state increased funding for higher education. I was very vocal about my belief that the increase in higher education funding should be used to address the affordability of tuition for Texas families. Finally, I have also staunchly advocated for the uniformity of transfer credits.

VT: Sadly, we are on track to leave our children a nation buried beneath a mountain of debt with politicians and bureaucrats in Washington controlling even the most routine aspects of our lives. We are losing our freedom not to a tyrant, but to government itself. I refuse to accept this future for our children. I believe America’s success story has volumes yet to be written, and it is our duty to ensure the next generation inherits a nation just as strong, secure, and prosperous as previous generations have passed down throughout our history. America is at a tipping point. We must protect our liberty, restore the core mission of government, and renew the promise of the American Dream.

TRL: What could draw Democrats to your campaign?

VT: In the Texas Legislature, I have been successful at building bipartisan coalitions to pass real problems. In fact, I frequently joined with a Democrat author in the opposite Chamber to sponsor my legislation, and every bill I passed into law contained bipartisan support. In part, these important policy solutions included: protecting children from online sexual predators, making it easier for our military to vote while serving overseas, sweeping new protections for victims of domestic violence, sexual assault, human trafficking, stalking, and many more.

TRL: What sets you apart from the other primary candidates?

VT: In the state legislature, I have proven myself to be an effective conservative leader. I have taken tough votes and worked with our community to craft common-sense solutions to real problems. I know the legislative process and have a record of working with constituents on important bills to keep our area the very best place to live, work, and raise a family. My best legislative ideas come directly from the people, and I look forward to continuing my 100 percent meeting policy. And finally, my time serving in combat offers me a perspective. While I have watched some legislators struggle with a tough vote, I have always been relaxed doing what is right and knowing that in the worst-case scenario everyone will walk out of the Capitol and go home to their families. This perspective can infuriate lobbyists and special interest groups, but it allows me to always put the people and my values first.

VT: My focus is on earning the trust, confidence, and vote of the people of the Third Congressional District here in Collin County. If elected, I will honor that trust by fighting every day to represent the people of Collin County and safeguard our freedom. As it relates to President Trump, he carried Collin County by a wide margin (including my vote). There is a lot to fix in Washington, but I look forward to working with President Trump, and every member of Congress, regardless of party, willing to work together in the best interest the people rather serving the destructive Washington-style political gamesmanship of Nancy Pelosi and Chuck Schumer that for years have stifled economic growth, left our borders and nation less secure, and left people frustrated with Washington, D.C.