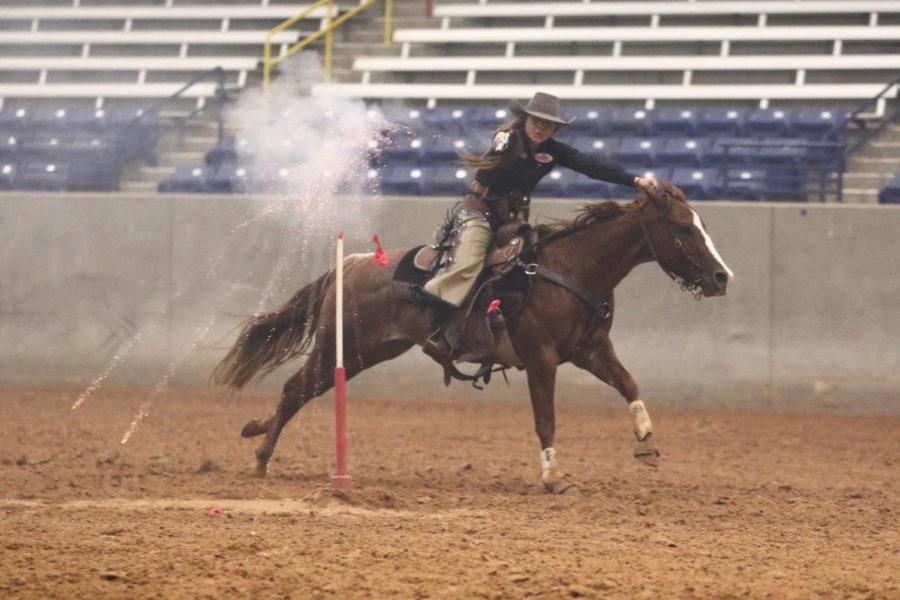 The horse races beneath her, but she never looks down.

Her eyes, peeking out from under the brim of her cowboy hat, follow her extended hand as it aims a single action .45 pistol at small balloons atop skinny poles. Her other hand grips the reigns and maneuvers the horse around the arena.

With every puff of smoke, the gun sends a bullet into the fragile, rubbery flesh of the balloons.

Though Lindsey Farrell has been riding for about nine or 10 years, she never handled a gun outside of a few hunting trips every once in a while. She didn’t even know what the sport of mounted shooting was before her 4-H troop, Lone Star 4-H, brought in a mounted shooter as a guest speaker. All she knew was that it sounded more interesting than barrel racing.

Once Lindsey’s father found an instructor online and purchased a lesson from him as her 14th birthday present, her journey in guns and galloping began.

“I didn’t know what I was doing [at first], so I just got to go and hang out and participate,” Lindsey said. “Time went by, and I wasn’t very good then–it took me a while to really realize how much time and hard work to take.”

Once Lindsey came to terms with the amount of effort and practice required to be successful, she buckled down in the winter of 2015. She practiced for a minimum of three hours per day until she began winning competitions in the spring of 2016. She said that spring was when she truly “started competing and became a competitor,” and winning fueled Lindsey’s newfound fire for the sport.

“Before [the spring of 2016], I was just there pretty much participating. Once I kind of got that first taste of winning, I was like, ‘I can’t stop– I’ve got to keep going,’” Lindsey said. “It was that fall of 2016 that we started traveling a little bit.”

Once I kind of got that first taste of winning, I was like, ‘I can’t stop– I’ve got to keep going.’”

Eventually, Lindsey, who would be a senior this year, and her family made the decision to leave the high school in February 2017 and enroll in online classes through Texas Tech University so she could further pursue mounted shooting. One day she may be doing school work until around 3 p.m. before working horses and attending drill team practice for the Woodhaven Wranglers, and the next she may be riding colts for a woman in Leonard.

The idea of online school came about after Lindsey’s father, James Farrell, spoke with a woman at a Tennessee competition in September 2016 whose children were homeschooled for the sake of a more flexible schedule. With Lindsey falling behind in school, James proposed online schooling to his wife, who was firmly against it at first but soon became convinced.

“The more we start talking about it the more it made a lot of sense because she’s getting more points and you’re trying to win your division,” James said. “It’s just how Lindsey is–she’s more of a self-study type person, and it was like, ‘I think she could do that.’”

Lindsey has traveled as far as Georgia, Louisiana, and Ohio for multi-day competitions, which are time-based. The timer starts as soon as a horse crosses the line, and competitors must ride through five different patterns, each with 10 balloons to shoot. The times from each pattern are added together, and the fastest total is the overall winner.

“It’s like a distance race basically because you’ve got five patterns you have to shoot clean on if you want to win,” Lindsey said. “It’s not just a one and done. You’ve got to keep your crap together for the next three days on all the patterns. You don’t really think a whole lot– it’s just your reaction time. Once you get done and you run a good pattern, that’s probably one of the best feelings ever.”

In just a year, Lindsey went from a level one rider to a level four-rider on a one-to-six scale because of the “really good foundation in her riding,” her instructor Curt Moore said. As Lindsey rose through the ranks, she became more well-known.

Top 10 high point ladies, Texas state ladies overall, and limited shotgun world champion are only a few of the titles Lindsey has garnered as a result of her quick progression. Despite her achievements, Lindsey briefly struggled to conquer her inner “control freak” and let the horse go. However, Lindsey said her 3-year-old, Junebug, makes improving and competing easier due to the horse’s calm, willing disposition.

“She’s as honest as they come. She’s got to be the coolest thing around,” Lindsey said. “There’s just no telling what she can do, and I’ve only just started really shooting on her, so I’m pretty excited for her. She just gives everything every time I ask for it, no questions asked. The funny thing is she’s [about] 13 hands–she’s itty bitty, but she can move.”

They all know who is she now, but they didn’t see her coming, and they didn’t know what was hitting them.”

Junebug served Lindsey especially well at a recent world championship when her old horse acted unruly and caused her to miss a balloon.

“I decided to grab [Junebug] because, at that point, I’d missed a balloon so it’s like, ‘Why not put more time on my upcoming horse?’” Lindsey said. “So I ran [Junebug] the rest of the shoot at worlds, and she ran perfectly. That was the best feeling I think I’ve ever had because I put so much time into her all year for that 13 seconds of fame.”

Lindsey will be attending Texas Tech University as a college student this fall, and she hopes to make the school’s ranch horse team. Before the year ends, she hopes to reach level six so she can be considered a professional and train others. But to continue competing successfully, Lindsey must stay bold.

“It’s definitely an adrenaline rush,” Lindsey said. “You get so caught up in practicing going slow and really hitting everything that when it comes to pushing yourself, you have to let go of the reins and just go. Just having that confidence, I think, takes a lot because if you don’t have the confidence in that sport, there’s no way in heck you can get going and actually keep up.”