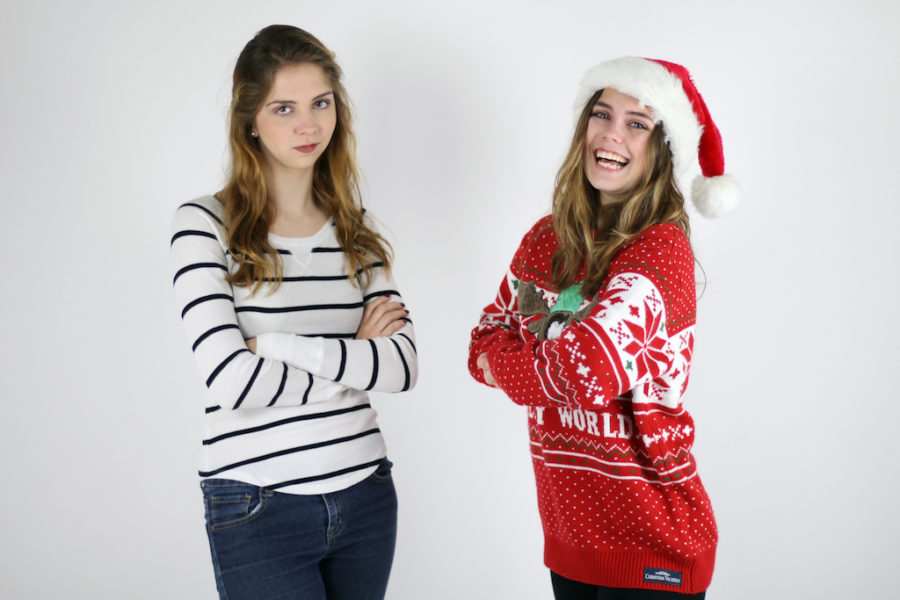 Christmas music– the commercialized, holly jolly, repetitive songs that are played in every store, restaurant, and house in the months leading up to a singular holiday.

Don’t get me wrong, I don’t hate Christmas. I just hate the commercialism of it. Some of my friends may call me Genrich the Grinch, but I feel like it takes away from the specialness of the holiday and season of giving. Especially with the music, it is overkilled with different versions of the same songs over and over.

This childhood trauma may stem from my neighbors constantly playing “Charlie Brown Christmas” all year round, no matter if it was June or December. However, I do admire the commitment to the holiday.

There’s only so much a person can take, and it seems like no matter where you go you cannot escape the same recurring notes that fill the air. It feels like I’m trapped in a bad episode of a sitcom where the same events occur over and over and over.

Below are my unpopular opinions on several acclaimed Christmas albums.

“A Charlie Brown Christmas” by The Vince Guaraldi Trio: This album is a classic, I’ll give it that. However, it is a series of the same notes over and over.

“Merry Christmas” by Mariah Carey: Let me just start off by saying that Mariah takes the title of one of the most overrated artists in general. Her voice sounds nice on the radio, but I challenge you to listen to her live, non auto-tuned performance. Also, Carey’s “All I Want for Christmas is You” is one of the most overplayed songs in all of Christmas music.

“Christmas” by Michael Buble: This one I have to give absolute credit where it is due. Michael Buble’s voice is the smoothest sound I have ever heard. I will say, however, that I still enjoy his regular music over his Christmas tunes. I think he could have chosen a couple of better Christmas songs to round out the rest of his album and give it more levels. My favorite song on this album is “Ave Maria” because it is just so mellow and endearing to listen to. His Christmas album is one of the better albums I can tolerate.

“A Jolly Christmas” by Frank Sinatra: Frank Sinatra’s voice is velvet no matter what he sings. He provides such a nice tone that really emphasizes the time period in which he was extremely popular. I will say that his Christmas album really carries a lot of spirit and joy in the notes that he sings. Sinatra’s voice has a very Christmas-y sound to me which really does enhance the classics. That being said, I still think his traditional songs are better. Nothing is more fun than driving with “The Way You Look Tonight” or “Come Fly With Me” in the background.

“That’s Christmas To Me” by Pentatonix: Putting a capella to Christmas music is a pretty new and interesting idea. I think the variety of songs on this album makes it really good and adds a modern spin. “White Winter Hymnal” is a beautiful song, but this album is a little too overly jolly for me, almost to the point of annoyance. The lack of several different emotions makes it slightly less entertaining to listen to.

If you’re like me, then this holiday season I recommend limiting exposure to holly jolly jams but have the occasional listen to Michael Buble. Celebrate the Christmas spirit in different ways that have the same effect but are slightly less repetitive.

Ah, Christmas music. It warms the soul as well as your peppermint hot chocolate does.  Listening to Christmas music is the best way to get in the spirit of the season– in some cases it can be more effective than opening your presents.

Christmas music combines everything great about the holiday into a four-minute song. Just imagine trying to decorate the house without playing some Christmas music. It’s simply wrong to construct the architectural masterpiece that is your gingerbread house without listening to Michael Buble.

Below, I’ll be giving my take on five of the best and most iconic albums in existence. These albums will truly make everyone’s heart fill with the joy and love that Christmas brings.

“Merry Christmas” by Mariah Carey: Let us remember that this album is not just “All I Want For Christmas.” This album defines Mariah Carey, and, in my opinion, is the height of her career. “Oh Holy Night” is absolutely stunning. While it is a popular and typical album to love, it is worth the hype.

“Christmas” by Michael Buble: Okay, do I even have to explain this one? Have you ever heard such a lovely voice in all your life? When I think of Christmas, I think of beautiful times and dazzling lights, which Buble has done such a great job portraying on this album. Every time I listen to this album I swear I felt like the fresh snow Texans never see. It is the best Christmas album out there. It includes “Ave Maria,” which is my favorite holiday song. He also has a Spanish song and includes many different types of Christmas music, including some in the style of 50s radio music. This great mix of sounds ensures you’ll never get bored listening to it. “Christmas” truly is an album for everyone.

“A Jolly Christmas” by Frank Sinatra:  Frank is my favorite singer of all time. I find this album so enthralling because he takes all of the classic Christmas tunes and puts his own big band swing on them. There are so many beautiful songs on this album. “I’ll Be Home For Christmas” is guaranteed to make you swoon. His voice is so unbelievably amazing when accompanying Christmas music. He also has some not as well known Christmas songs on this album, which is so refreshing when all the stores you are walking into only seem to know “Jingle Bells.”

In conclusion, Christmas music is the heart of holiday cheer. Anyone who believes differently is probably crazy. So this holiday season, make sure to crank up your Michael Buble and Mariah Carey and get in that merry Christmas spirit.