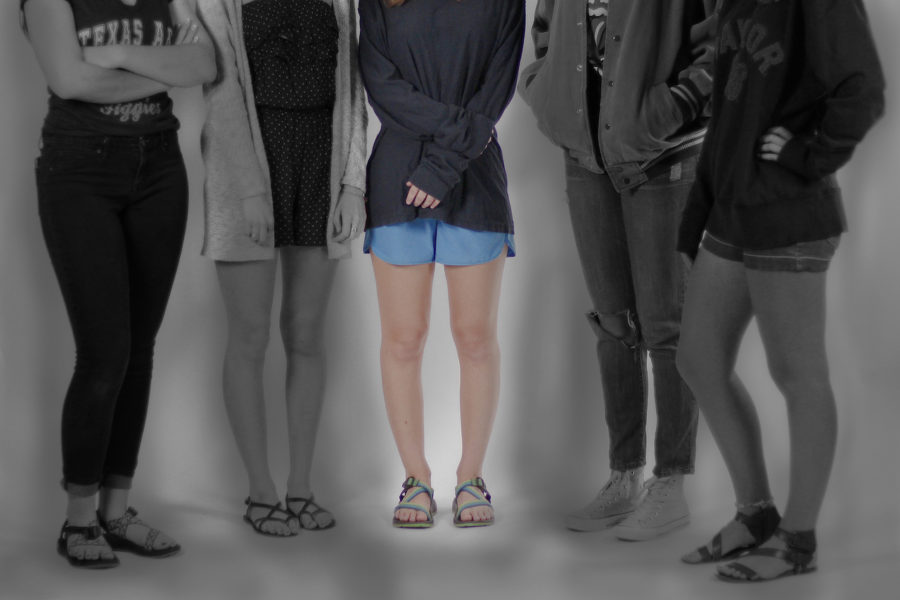 In a recent survey conducted by the Bureau of Justice Statistics, it was found that approximately one in every five undergraduate women on a college campus will be the victim of sexual assault.

Emerging from the shadows

Editor’s note: Due to the sensitive nature of the topic, “Elizabeth’s” real name will remain anonymous at the request of her and her family.

At the gym. On campus. In the streets. Everywhere the Lovejoy graduate and college sophomore goes, the memory of her assaulters follows.

It was Elizabeth’s freshman year of college when it happened. She had just escaped the roots of her small town, and with that, escaped the memories of the man who sexually assaulted her when she was 17 years old. She believed college would be a fresh start, a way to put the horrors of her past behind her. And for a few days, it was. However, it only took one night for all of that to come crashing down.

“I was with people who I had just met, but they weren’t my friends, we were just going to a party together,” Elizabeth said. “They didn’t have to look out for me. They didn’t have any responsibility ties to me. Looking back on it now, I should have realized that was bad, but I was just fresh into college looking to go party. Everyone was doing the same thing.”

I’m usually this happy sunshine girl, but no one knew what was going on in the background.”

After some time had passed at the party, she stopped a member of the fraternity which had organized the event and inquired about the location of the bathroom. She followed him upstairs, relieved to finally be pointed in the right direction. Unbeknownst to Elizabeth, the boy’s intentions were anything but pure. It was there, amid the distant cheers of the partygoers and the muffled shake of the bass that he lured her into his room and forced her onto the bed. The rest is blank. All she remembers are the moments after waking up. She remembers pale skin. She remembers piercing blue eyes. Mostly, she remembers the realization.

Elizabeth had been raped for the second time.

“Mentally, I was just numb,” Elizabeth said. “I would cry myself to sleep, and I would wake up and go to class. I’m usually this happy sunshine girl, but no one knew what was going on in the background.”

Elizabeth’s experience, while traumatizing and scarring, is not an outlying or unusual case. According to a survey conducted by the Bureau of Justice Statistics in 2016, 21 percent, or one out of five, women on college campuses in the U.S. will be a victim of completed sexual assault. Likewise, in a recent study conducted by the University of Texas, 15 percent of their female students reported experiencing some form of sexual assault during their time at the school.

Sexual assault is, in fact, a ‘one-way’ violence that is 100 percent the responsibility of the person perpetrating the act.”

“According to the Department of Justice, we know that someone is sexually assaulted every 98 seconds in the United States, yet only one-third of sexual assaults are reported,” Bowles said. “There are many reasons that they don’t speak out. They may be embarrassed. They may think nothing will be done. They may even fear they won’t be believed or will be blamed for what happened.”

All the people interviewed for this story agreed such fears are not irrational or unwarranted. Within modern society, the act of normalizing and trivializing sexual assault and abuse is not uncommon. Additionally, the victim is often blamed or said to have been “asking for it” based upon their actions or attire.

“Despite our progress with social equality, victim blaming and shaming remains the greatest stigma in sexual assault,” Bowles said. “So often, we ask questions that make survivors feel there is something he or she should have done to prevent the assault. Sexual assault is, in fact, a ‘one-way’ violence that is 100 percent the responsibility of the person perpetrating the act.”

Elizabeth, who attempted to bring her second rape to trial, was denied any further progress on account of the fact “that no reasonable grounds existed that the sexual misconduct policy was violated.” Upon hearing this news, Elizabeth began to suffer from retraumatization, in which her suppressed memories and feelings over the event resurfaced and began to overwhelm her life.

If someone gets bitten by a dog, and they say ‘Oh I’m kind of wary around them now’ most people understand. But if a woman says she was raped or abused by a man in the past, and now says she’s afraid of them, she gets told she’s paranoid and needs to get over it.”

“I started getting really, really physically sick,” Elizabeth said. “My mental game was already gone, and then I started getting physically sick where I went from 140 pounds to 113 in two weeks. Doctors couldn’t tell me why. The combination of everything was just not in my favor. I almost had to take incompletes in all of my classes, and it was horrible. It was rough. But I got through it.”

Despite being a global problem, confusion remains over what exactly constitutes the classification of sexual assault. Texas law defines it as “sexual touching of another without consent.” If a person is physically unable to consent, such as if they are intoxicated or under the influence, it is classified as sexual assault. Despite the simplicity of the definition, victims like Elizabeth say that misinformation and a lack of understanding are still prevalent.

“I noticed that if someone gets bitten by a dog, and they say ‘Oh I’m kind of wary around them now,’ most people understand,” Elizabeth said. “But if a woman says she was raped or abused by a man in the past, and now says she’s afraid of them, she gets told she’s paranoid and needs to get over it.”

The consequences of sexual assault linger long after the crime is committed. Many sexual assault survivors suffer from post-traumatic stress disorder, depression, eating disorders, substance use, and suicidal thoughts or actions. Liz Ennis, The Turning Point’s community outreach coordinator, said the road to recovery can be a long and painful one for those who have suffered from sexual assault.

“The first thing I would say to a victim is that they are now a survivor,” Ennis said. “First and foremost a survivor must take care of themselves. The path is difficult and healing is different for everyone. I would encourage the survivor to seek safe shelter, medical help, and then counseling.  Strength, hope, and healing are totally possible. Be kind to yourself, and take care of yourself.”

With April being sexual assault awareness month, many organizations such as The Turning Point recently focused their efforts towards shedding light on the problem as well as providing possible solutions. The prevailing idea is, despite the trauma and difficulties surrounding it, sexual assault is a preventable crime.

“It is immensely important to raise awareness within our community,” Ennis said. “It is important to teach young people what healthy relationships are, how to respect boundaries, and that consent must be given at all times by all parties involved. Moreover, we need to believe a survivor, support a survivor and encourage he or she to seek medical help and counseling. If the conversation isn’t started, sexual assault will stay in the shadows.”

There are a variety of programs and 24/7 hotlines that aim to provide a safe place for victims of sexual assault to receive help, counseling, and justice. Employees at The Turning Point urge all victims to contact them so they can start on a healthy path toward recovery.

“I would tell [victims of sexual assault] that there are adults who care, want to help, and will guide them,” Bowles said. “There are laws through Title IX to protect them at school. I would encourage them to trust a safe person and talk about what happened. They can reach out to their local Rape Crisis Center, like The Turning Point, anytime day or night if they need to talk, 800-866-7273 or they can call the National RAINN Hotline at 1-800-656-HOPE. There are specially trained people who can talk through things and advocate for them.”