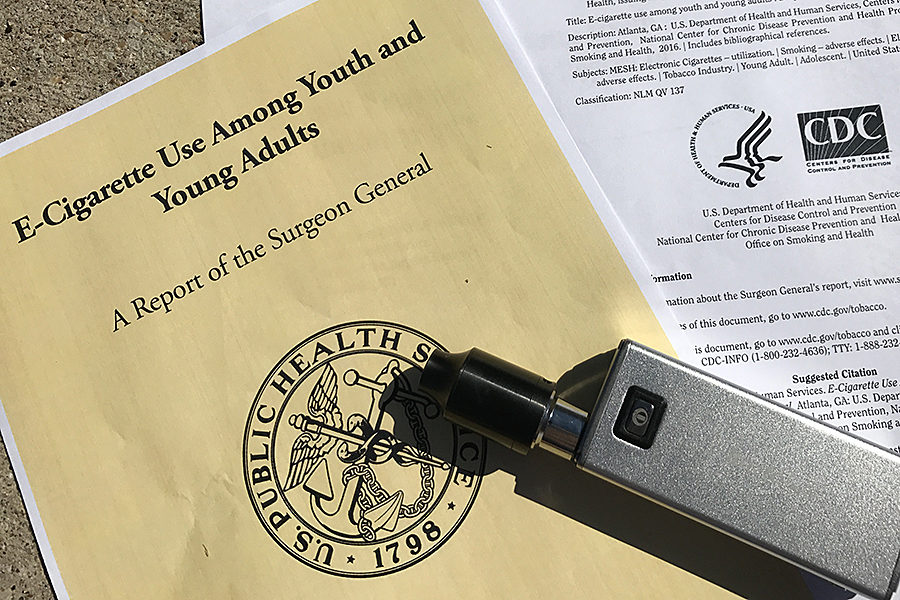 The US Surgeon General recently reported that e-cigarette use had grown 900 percent among adolescents from 2011-2015.

E-cigarette use among students at the high school in the past 30 days is nearly double the national average for adolescents, according to a recent survey by The Red Ledger.

Encompassing all grade levels, 30.4 percent of the survey’s 276 respondents had vaped, or used a device that vaporizes a flavored liquid for inhalation, in the past 30 days. This compares to the 16 percent national average among high school students according to report by the United States Surgeon General released in early December. However, senior AP research student Tyler Le said the statistical difference is no cause for alarm.

“Statistically speaking, I don’t think it’s significant that our percentage is double the Surgeon General’s average and shouldn’t be a red flag to people that Lovejoy is facing a serious problem, because that national average takes in a wide range of demographics where Lovejoy would be an outlier,” Le said. “Our economic advantages over other communities, I think, makes vaping a more popular habit, and we have more time on our hands to engage in it. Of course it is a problem, but it doesn’t need to be immediately addressed as I don’t see vaping as a gateway into other substances or habits and there are certainly more dangerous things for students to be involved in.”

Among respondents who vaped, 51 percent did so on a daily basis followed by 24 percent who have only vaped a few times before. The most popular reasons for vaping among respondents were curiosity, its relaxing effect, and its popularity among peers, though senior Emily Ottinger said she thinks vaping’s accessibility is also a factor.

“I think the 30 percent for past 30 day use is an accurate figure because Lovejoy has a wealthier demographic than most of the country and it’s more accessible for students because they have their parents’ money or credit card where the cost won’t be noticeable,” Ottinger said. “Vaping doesn’t give off an odor like regular cigarettes do, so I can see why it would be a popular option, in addition to the fact that some vape shops around here don’t card because they know our students are rich and willing to spend money on it.”

In a comprehensive report on the subject released in early December, the US Surgeon General, Dr. Vivek H. Murthy, determined that vaping is now a “major public health concern” due to its 900 percent growth among high school students from 2011 to 2015.

“These products are now the most commonly used form of tobacco among youth in the United States, surpassing conventional tobacco products, including cigarettes, cigars, chewing tobacco, and hookahs,” said Murthy, in the report. “Most e-cigarettes contain nicotine, which can cause addiction and can harm the developing adolescent brain.

“Compared with older adults, the brain of youth and young adults is more vulnerable to the negative consequences of nicotine exposure. The effects include addiction, priming for use of other addictive substances, reduced impulse control, deficits in attention and cognition, and mood disorders.”

The report focused primarily on the use of e-cigarettes by adolescents in its research, as well as highlighting the health effects on youth and the trends of the growing e-cigarette market. In compiling numerous surveys and research, the report found that those who had used e-cigarettes in the past 30 days accounted for 16 percent of high schoolers, 5.3 percent of middle schoolers, 13.6 percent of those 18-24 years of age, and 5.7 percent of those 25 years or older. Its research also showed that the most common reasons for usage were curiosity, flavor/taste, and a perceived lower harm compared to other tobacco products.

In its research into the health effects of e-cigarettes, the report found that the variety of vaping methods, devices, and liquids has made comprehensive research on the effects of vaping challenging, leaving much still unknown on the topic. However, the report reiterated the negative effects of nicotine, which is commonly used in e-cigarettes, on a developing adolescent brain and its ability to cause birth defects if used during pregnancy.

In the “Call to Action,” the report lists numerous strategies to deccelerate the rise of e-cigarettes among young adults including federal regulation of the products, promotion of prevention programs, and increased research into e-cigarettes.

“We know what works to effectively prevent tobacco use among young people,” Murthy said. “Now we must apply these strategies to e-cigarettes—and continue to apply them to other tobacco products. To achieve success, we must work together, aligning and coordinating efforts across a wide range of stakeholders. We must protect our nation’s young people from a lifetime of nicotine addiction and associated problems by immediately addressing e-cigarettes as an urgent public health problem. Now is the time to take action.”

In accordance with the student handbook, students are not permitted to possess or use any e-cigarette or tobacco product while on campus or at a school-related activity, though assistant principal Bruce Coachman said he believes vaping has grown in popularity among the student population despite being prohibited.

“In my opinion, vaping has grown in our school these past years to a certain degree especially as it becomes more known to students,” Coachman said. “To me vaping has a dangerous component because we don’t know what’s exactly in the vape. Kids will tell me ‘Oh there’s no nicotine’ or ‘There’s no THC.’ Well I have no way to know for sure whether that’s the truth or not. Due to that fact, it’s a banned item on this campus.”

While state law currently has the same restrictions on youth e-cigarette sales as youth cigarette sales (purchase, possession, and use prohibited to those under the age of 18), Coachman said that he has disciplined students for e-cigarettes in far greater numbers than cigarettes.

Kids will tell me ‘Oh there’s no nicotine’ or ‘There’s no THC.’ Well I have no way to know for sure whether that’s the truth or not.”

“We rarely, on this campus, have ever had students smoke regular cigarettes outside of a few minor incidents,” Coachman said. “Almost exclusively have I caught students for vaping rather than smoking, and I also don’t think I’ve ever confiscated a vape device from a girl student before. It’s been mostly boys that I have disciplined for vaping. As far as disciplinary measures are concerned though, we treat e-cigarettes just the same as cigarettes.”

Outlined in its “Call to Action,” the surgeon general report supports measures to educate youth and parents alike about the risks of e-cigarette use among teens through programs and evidence based messages in order to curb the rising trend of use.

“From a programmatic standpoint, we haven’t had any specific education or programs on vaping aside from the basic information taught in the mandatory health classes,” principal Chris Mayfield said. “If vaping came to a level where so many kids were becoming involved in it, we would certainly consider setting aside instructional time for education on the topic.”

While the surgeon general report found that quitting conventional cigarettes was not a primary reason for e-cigarette use by youth, another report by the Royal Physicians College of London found that e-cigarettes are used by adults exclusively for cutting down or quitting smoking and are an effective aid for this purpose.

“The evidence summarized in this report demonstrates that the emergence of e-cigarettes has generated a massive opportunity for a consumer as well as a healthcare-led revolution in the way that nicotine is used in society,” the report stated. “As the technology of these and other non-tobacco nicotine products improves, so the vision of a society that is free from tobacco smoking, and the harm that smoking causes, becomes more realistic.”

Becky Ridgeway, mother of juniors Claire and Grace, had been a smoker of conventional cigarettes from the age of 20 until two-and-a-half years ago when she decided to try e-cigarettes in an effort to quit smoking. Since then, Ridgeway said she has experienced a dramatic change in her health.

“I don’t cough anymore, my doctor says my lungs are clear, and I haven’t had bronchitis ever since switching, which I had been getting about three times a year when I had been smoking,” Ridgeway said. “I can exercise frequently now and I’m not short of breath. To summarize that, I feel like I’m not a cigarette smoker anymore. I think I’m choosing a healthier path to get nicotine by vaping, but it’s still a vice and I’m not willing to give it up yet, but hopefully I will be ready soon.”

Under state law, e-cigarettes hold the same restrictions as conventional cigarettes in public places such as libraries, theaters, and public transportation, with use allowed only in designated areas. Ridgeway said she has seen a great difference in social stigma between the two, despite how they are seen equally under the law.

I feel like I’m not a cigarette smoker anymore. I think I’m choosing a healthier path to get nicotine by vaping”

“The stigma towards vaping that I’ve experienced hasn’t been nearly as much as smoking, not even close,” Ridgeway said. “I vape in my friend’s houses, my home, and in public sometimes, because I don’t think it has near the danger that cigarettes and secondhand smoke has proven to have. That being said, I think you almost have to treat it like you are smoking a cigarette because the people around you aren’t sure what exactly is in it as it can be used for illegal substances, but I think if that weren’t the case it I don’t think vaping in public would be an issue.”

While Ridgeway said she her health has benefitted from the alternative vaping has provided, she urged teens to not take up vaping or any habit that can be addictive, noting that she regrets ever picking up a cigarette when she was young.

“I may be a little biased in wanting to believe it’s okay because I’m doing it, but so far there hasn’t been anything conclusive to say whether vaping is bad or not,” Ridgeway said. “I think kids may see vaping as glamorous per say with all the flavors and devices out there that makes it attractive to them, but I don’t think any teens should start any habit that may be addictive in nature because there’s just no reason to.”