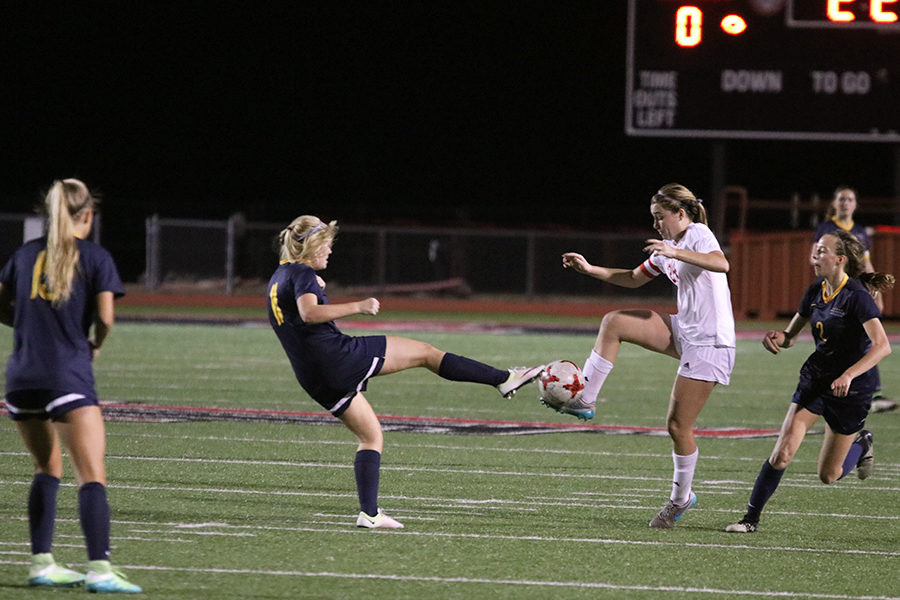 Sophomore Lizzie Weichel steals the ball from the Forney midfielder.

Girls soccer will travel to Wylie East High School to face against the Raiders on Friday, Feb. 3, at 7:15 p.m.

After splitting their last two games, coach John Baker is hoping to build some momentum on Friday.

“We’re going to refocus and stay positive,” Baker said. “Just take the stuff we’ve been doing well and make it better. Keep our concentration and put our chances away.”

Heading into the Wylie East game, senior Emily Bryant said the team has lightened the intensity of practices this week.

“We’ve been cooling down from our last game and getting a rest,” Bryant said. “We’re going to play our hardest the entire time, all 90 minutes.”

The girls got their first win of the season in the first away district game against West Mesquite on Friday, 5-0.

“It was nice getting our first win because it helped the morale of the team,” senior Jensyn Caton said. “It’s helped us be more positive into our season.”

The girls learned some lessons from the win.

“We moved the ball very well,” Baker said. “We created a lot of chances and did a good job of getting away despite the fact that it was a physical game.”

On Tuesday, the team lost to Forney, 1-0. With the loss disrupting momentum, the team focused more on what needs improvement for upcoming games.

“We’re lacking communication,” Bryant said. “Just talking and playing together as a unit. I think that is our biggest problem.”

Following the loss, the girls have put more work into their offense so that they can capitalize on their chances.

“We’ve only scored seven or eight goals; that’s not a lot for only eight games,” Caton said. “We’ve been working on attacking more and scoring overall.”