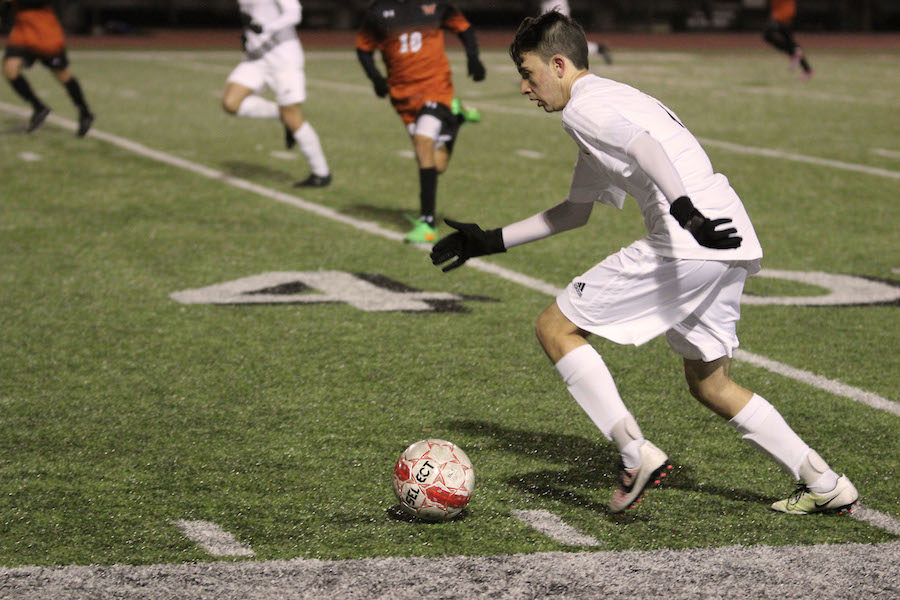 Junior Kishan Vasal dribbles down the field in the game against West Mesquite.

After defeating district foe Forney 4-1 on Tuesday, the boys soccer team is on four-game winning streak and will face Wylie East at home tonight at 7:15 p.m.

With the win against Forney, the Leopards sit at first in district at 3-0. The Leopards will look to make it five tonight against second place Wylie East.

After not winning until their sixth game of the season, the Leopards have bounced back from their rough start. Freshmen Michael Branch was recently pulled up to varsity from junior varsity and has been making a difference on the field for the Leopards.

“A lot of the players play at a lot higher level and I have to adapt and play at the same speed so I can keep up with them,” Branch said.

Tonight’s matchup could be crucial down the road when determining who gets one of the top four spots to make the playoffs.

“We just need to go out there and play our game, not get frustrated and play the way we did the second half vs. Forney,” junior Enrique Vega said.

Both teams are currently 3-0 in district, however, Wylie won their last game in penalty kicks, giving them one less point than the Leopards in the standings. Lovejoy has nine, Wylie has 8. East too, is on a four-game win streak and looking to get that fifth win against the Leopards.