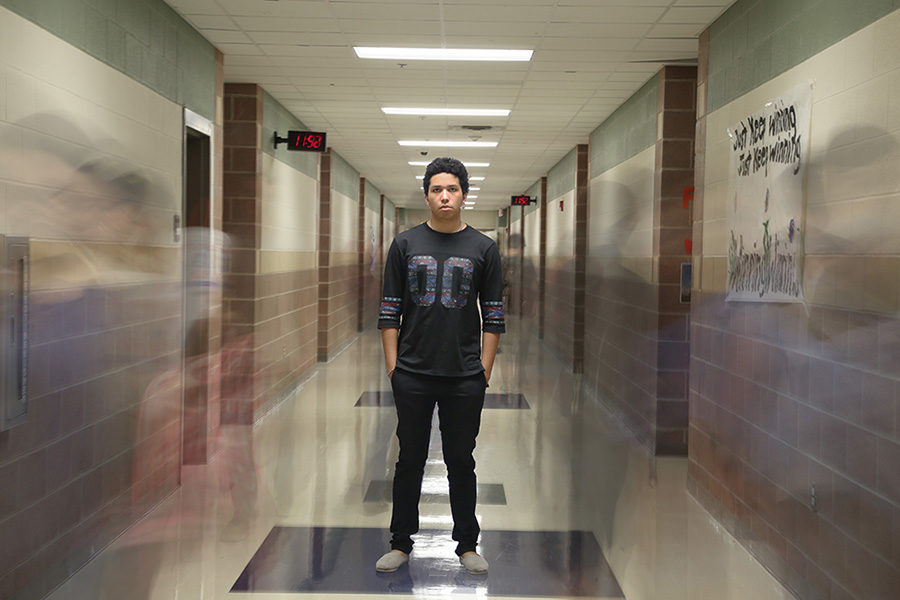 Having attended a primarily white school since kindergarten, staff reporter Carter Bryant reflects on experiences with racism and what he believes must be done to fix the problem.

Column: The day my world changed

As a minority in a mostly-white school, Carter Bryant speaks on being comfortable in your own skin, despite the color

I was a sixth-grader the first time I heard that word directed at me. Directed at anyone, really.

It was the first pep rally of the year, and I was walking with my friends to the gym. We could hear the band in the hallway and the loud chatter of the crowd, a bunch of eighth-graders laughing at some joke as we found our seats.

At first, it was innocent. Older kids messing with younger kids, kicking our seats. I tried to ignore it. But soon it focused on me as I felt things being pushed through my hair, pencils and paper clips in my Afro.

I spoke up, sternly telling them to stop. That seemed to work, but when the pep rally ended one of the boys kicked my backpack as we were leaving, causing me to fall across the bleachers. As my friends tried to help me up, I turned to look at the bully and I saw him say it.

That word. The word of taboo, one I had only seen in books and movies and thought of as a relic of history.

To my knowledge, my offender never got any real punishment for what he did. The school said sorry on his behalf and told him to stay away from me.

That day changed my perspective of the world and of myself. His words didn’t necessarily hurt my feelings but made feel like I wasn’t really human. I wasn’t Carter Bryant anymore, at this school, I was marginalized to being just a black boy.

After that day, I have noticed every lingering eye that followed me in a store, every lady who walked by me who clutched her purse, and every mumbled comment. What confused me was not the derogatory comments or behaviors I was observing, but instead the seemingly innocent comments that I hear constantly.

“Oh you’re black on the outside but white on the inside.”

I don’t think people who say these things are trying to be derogatory or mean, but the implication hurts. Why do I have to act a specific way because of my complexion?

All I can do when people say those comments is smile to hide my frustration and say, “There is no such thing as acting ‘black’ or acting ‘white.’ People are who they are because of their environment and how they’re raised.”

But what I find most frustrating about when people say “You don’t act black,” is the implication that they already have a preconceived idea of how black people act.

A classmate of mine feels without a voice in our school as a student of color, and often feels uncomfortable to speak up against problems. I asked her for her thoughts, and she asked to remain anonymous because of fear of judgment from her fellow students.

“In light of the disproportionate killings of unarmed black men, I hear little empathy or care from other students; it is a real problem,” she said. “Our school needs to help try to solve cultural issues, racial issues, micro-aggressions and small acts of prejudice. It needs to be stopped around our school. It really does affect people. It should not be taken lightly.”

The hardest things about being a minority at a mostly white school are the constant comments on black culture fully based on ignorance. I have heard a lot offensive comments at this school, but it’s partially my fault that it happens.

Despite these negative experiences, going to a primarily white school has let me have cool experiences and let me understand the importance of not generalizing people.”

I mostly stay quiet and ignore the comments to keep the peace and stay in good standing with people, but that idea is more destructive than constructive. Most comments I hear are not trying to be hurtful, but most people don’t realize the hurt they are causing because minorities don’t often speak up.

These micro-aggressions can become quite frustrating over time. Black culture is not rap music, saggy pants, drugs, riots, fried chicken or watermelon. It is generations of history and ideals to bring people together. But this is true for other races as well.

Although I do not agree with all the hype that “racism is back to as bad that it was in the 1940s and 50s,” to argue it does not exist is ridiculous. Even in our own schools, prejudice does exist; I have seen and experienced it many times over.

As an underclassmen in the cafeteria, there were students sitting at the table next to me who used to crack jokes about how I was black and throw food at me.

I had asked many times for them to stop but it continued for almost two months until I was fed up. I am a slow-to-anger person, but you can only take so much every day. After another day of being hit with food, I slammed my tray of food into the face of one of the students who had been messing with me.

After that, they stopped. I’m not proud of what I did, nor do I encourage it. I’m telling this because even generally civil and understanding people can get mad.

But now, looking back at it, the biggest way you can help someone in a bullying situation is stand up with them. None of the friends I sat with ever told them to stop or even asked me if I was OK. A person I thought was my friend was even at the other table egging them on. Standing up for people goes beyond race. If you see anyone being harassed or bullied, if call yourself a friend, act like it.

Being a minority requires you to become comfortable with who you are at a young age, because if not, you will always feel like an outcast. As a kid you have to become OK with the fact that your hair is different, your skin is different and your history and customs are different.

Before I started kindergarten, my mom told me that some people would be cruel and exclude me because of my race. This is a conversation most of my peers never had with their parents or will even have with their kids.

Despite these negative experiences, going to a primarily white school has let me have cool experiences and let me understand the importance of not generalizing people.

I have talked to many people from different races and nationalities, and have concluded that prejudice is learned and not innate. It’s easy to hate if you never try to get to know other people.

I feel with the current events unfolding in the news, and the high amount of social unrest regarding race, more now than ever in recent months people need to follow the cliche we all know: “Be the change you want to see.”

If you see something you know is wrong, don’t stay quiet. Be bold and confront it.

Coming to this revelation as a kid has kept me from ever believing the hype that “certain races are the root of our problems.” I am tired of the media, certain politicians, and celebrities turning issues of our world into an “us against them” scenario. We are all created equal, right? Why don’t we treat each other by our founding principles?

9 Responses to “Column: The day my world changed”