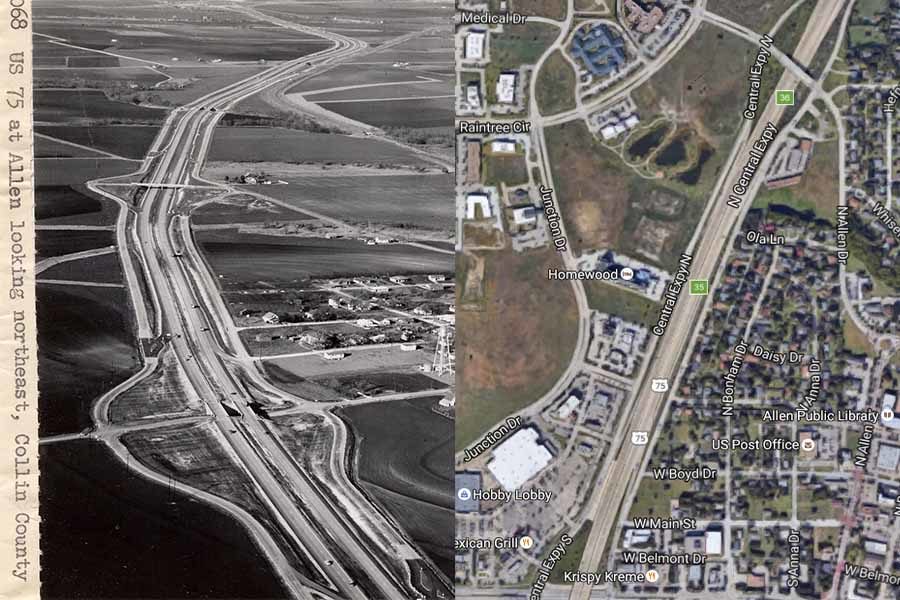 Since 1959, the population of Allen and Fairview have increased exponentially. Featured left is US Highway 75 North in 1959, and featured right is the same area and highway in 2016.

Rolling hills, trees, and farm houses scattered throughout the landscape paint a 360 degree picture of the past. Although they may still be “Keeping it Country,” the Fairview, Allen, and Lucas areas have changed and are continuing to grow.

“I don’t even recognize it (the area) anymore,” said David Lessner, local pastor and school district alum. “If Max’s Donuts weren’t still here then I would probably think I was in a different city because the number of livestock and cattle and open fields that used to be here.”

I don’t even recognize the area anymore.”

“It’s a trend that started in 1996 as people started moving away from the traditional large lots to smaller based communities, and that’s based on communities around us building out,”  said Joseph Hilbourn, development services director at the City of Lucas. “In 1980 there were 2,000 people in Allen, and right now they’re pushing 100,000 people. As land runs out, a developer runs further north and east.”

The greater a population is, the more businesses and services there are. One of the most prominent commercial developments in the area are the Villages at Fairview and Allen where concerts, graduation ceremonies, restaurants, shops, sporting events and much more can be found.

“The Village at Fairview began with the opening of JC Penney in 2009 with most of the rest of the shopping center opening in 2010,” said Liz Cappon, Town of Fairview secretary and PR director. “Additionally, the mall has dramatically increased the town’s sales and property tax revenue, which has allowed the town council and staff to do more projects that help the Town without needing to raise taxes. The mall brings an additional 50 to 60 million dollars a year in retail sales to Fairview.”

Animation teacher Ray Cooper moved to the area when he was in the fifth grade and remembers what the land off of Stacy Road was before it was a commercial shopping area.

“The area where the Allen Event center/Village is located was just an old farmer’s field,”  Cooper said.  “The only thing happening in that field was a few cows grazing, and I remember a shallow pond with an outcrop of limestone rocks next to it, and now there are major concerts in that area. Thriving businesses, and a constant hum of activity. Times have changed, but I think that it’s a good change. I can’t drive anywhere in Allen/Fairview/Lucas without feeling nostalgic about how things were when I was growing up here.”

With increased revenue from the Villages, and everything they bring like concerts, travelers, and more, there has been an increase in the economic development as well as commercial development.

“The biggest economic effect we have seen is the increase in sales and property tax revenue,” Cappon said. “This has allowed the town to fund more projects such as improved roadways, a second fire station and a new town hall.”

A Wal-Mart, Starbucks, Wendy’s, and Bank of America that recently opened in Lucas are also a part of the commercial development seen around the area, specifically in Lucas where the city has zoned an additional 250 acres said aside for commercial development. Other places like Lucas Foods and Max’s Donuts have stayed a favorite of area residents despite the other chains that have popped up.

“One thing that has stayed constant is the Lucas Food Mart on Country Club,” Cooper said. “It has had a bit of a face-lift since the 80s, but it was a place I stopped by every day or so, and who could forget good old Brockdale Park.”

For towns to grow and develop quickly like Lucas and Fairview have been, there must be a main pull factor for people to move and cause the population to expand.

“There’s three things that we have been told are the main causes of growth,” Hillbourn said. “One is our excellent school districts by the majority of our city is in Lovejoy. The second item is large lots and open space; people like that. The third thing is that we have very little government in Lucas.”

The growth of the district is also large, even though the school is still relatively small.

“It (Lovejoy in the 90s) was a lot smaller and a lot less congested,” Lessner said. “The red school house was music room and art room and band room, and everything like that kind of combined. There still was very much a feel of being in a country school, even though they had built a new wing when I was in sixth grade.”

“I’ve really enjoyed teaching in the area and school district in which I was brought up,” Cooper said. “There is a real satisfaction that comes with giving back to a community that gave so much to me as a kid. I have deep roots in this district, and, for me, there is something magical about Lovejoy ISD that nothing will ever tarnish.”

Although the area has grown rapidly in the past few years, local planners want it to remain relatively country and small.

“The town really does not see itself as going urban, however, the town designated a ‘Commercial Planned Development District’ or CPDD that runs on the west side of the town from U.S. 75 to just barely past Highway 5 …,” Cappon said. “The rest of the town, east of the CPDD, has no plans to become urban or change from Fairview’s large-lot country style that we remain known for by those throughout the Metroplex.”

To learn more about the CPDD go to http://www.fairviewtexas.org/index.php/component/k2/item/181-cpdd-update. As for Lucas, the build-out for the city is at 12,000, while the current population is 7,000.

“I guess that it’s (the development) just part of living in a community with good schools and growing space,” Cooper said.“I do think that Lucas and Fairview have grown in a way that still keeps the charm of the country life while having access to city amenities. Times change, and we need to be able to appreciate the past without clinging to it.”