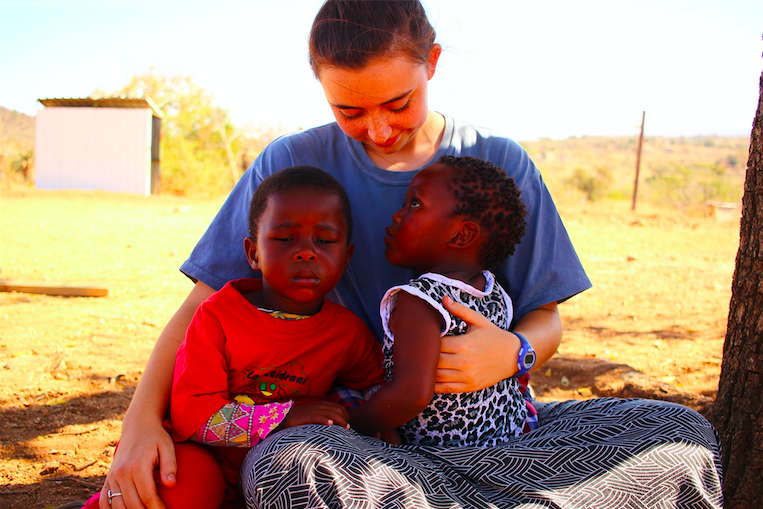 This past summer, senior Caroline Smith spent the month of July working as a missionary in the third world African country of Swaziland. (Molly Majerus)

This past summer, senior Caroline Smith spent the month of July working as a missionary in the third world African country of Swaziland.

'Sometimes, you go on a trip like this, and your life radically and quickly changes.'

Last summer, I lived in an ant-infested house with 13 strangers in a forgotten African country.

We had questionable water, and often, our toilet consisted of a mere hole in the ground. Sometimes a random man wearing a skirt entered our house without asking. Sometimes we got lost in a sketchy part of a big foreign city without any cell service. Sometimes my muscles ached so badly from holding kids that I couldn’t even bring myself to get out of my horribly uncomfortable bed/sleeping bag. And sometimes my vegetarian self was absolutely repulsed by what was put on my plate to eat at meal time.

Excuses, challenges, fear – worth it all

Second semester of my junior year, I was presented with the opportunity to go do mission work in the Kingdom of Swaziland through Adventures in Missions and their Ambassador program. The trip sounded amazing, but it seemed as if the world was screaming thousands upon thousands of reasons as to why I shouldn’t go. I had never even heard of Swaziland.  It was on the other side of the world.  The price tag seemed huge.  Spending a month away from the people I love sounded scary. My parents would never say yes. I was going to be a senior so I should spend the summer working on college applications, right? My mind raced on with every possible excuse.

Despite these valid arguments, I felt a deep calling to go, and so I did. I fundraised the necessary amounts, packed my bag, said some hard goodbyes, and got on a plane to go to an unheard-of country with people I had never before met. In case you were wondering, this was so ridiculously out of my comfort zone, but there I was, on a plane with no parachute or route of escape. No turning back. Terrifying.

Sometimes, you discover a culture and people, and you fall madly in love.”

But, so worth it.

I cannot put into words how worth it this trip was, despite the challenges. It was worth it because I was able to work as a missionary for the entire month of July. I cared for children who were orphaned and vulnerable, worked with victims of the AIDS epidemic, and taught in a local school. My job there was simply to love and serve the Swazi people in whatever way they needed. It was worth it because sometimes I couldn’t wipe the smile off my face because I knew how loved I was there, and I knew I was making a genuine difference. Sometimes, you discover a culture and people of whom you previously knew nothing about, and you fall madly in love. Sometimes, you go on a trip like this, and your life radically and quickly changes.

While all of the Swazi people hold such a huge piece of my heart, there are certain memories with them that I will forever treasure. Their names were far too hard for my American self to ever try to pronounce, but I remember them all the same.

I remember the chorus of young voices, singing together in hymns after school let out. All of these children, singing and dancing, with a passion unlike anything I had ever seen or heard before. Their voices were loud and bright. The songs they sang were more than just notes and lyrics; the music was something that these kids were uniquely passionate about. They were unashamed.  They didn’t care how they looked or sounded because they were worshipping someone much bigger than themselves.

I remember the special needs woman at the Bheveni Care Point; I nicknamed her “Joy.” This woman was radiant. Every day, I was greeted by her, in her torn-up striped dress and worn down shoes. I was greeted with a handshake, a hug, a huge smile, and a laugh that was impossible not to love. She had an insane amount of energy – even more than the kids. This woman was a complete outcast in her community, and even the children saw no problem in kicking her or pushing her away when she got on their nerves. But, she radiated joy like no one else, despite her situation. She loved so deeply despite the lack of affection she received.

I remember the girl wearing the dirty, pink butterfly shirt. She was very visibly malnourished and neglected, even worse than the rest of the kids. Most kids had shaved heads for health reasons. Her hair was long and matted. Her skin was covered in cuts and scars. She sat idle and alone while all the other kids went off to play. You could see literally see the extreme pain and rejection so clearly in her face, and my heart broke into millions of pieces for her.

I went and sat down next to this beautiful girl, wanting to do anything possible to sooth her sadness. She flinched when I tried to touch her and scooted further away, so there I was, just waiting. It was her move. After some time passed, she stood, walked up to me, and sat in my lap, all without saying a word. She was eating the only meal she would receive that day, but had noticed that I wasn’t eating anything (even though I was very well-fed), and therefore handed me her entire plate of food.

One would think that, even at such a young age, this girl would have been hardened by the cruelty of the world, yet she was still compassionate and generous enough to give away all she had just so that I would have a little extra food that day. I was blown away by the humanity in such a small, meek child. And I saw an example of what I desire to be as a person: completely and utterly selfless.

These children, with whom I spent most of my time with, are kind and beautiful and mischievous and intelligent and goofy and gentle. They also live in a corrupt monarchy. One in three of them are born with AIDS. They are in the midst of a very severe drought, so poverty runs rampant.

The fact that these perfectly good kids were born into an area of the world overwhelmed with disease, injustice, and a corrupt government, while I was born into a privileged lifestyle, absolutely breaks my heart. That alone is a huge injustice that I will never fully comprehend. These kids deserve to receive just as many opportunities as American children, but the harsh reality is that they never will.

Perhaps the even bigger injustice is that people living here, in such a privileged area, are completely ignorant to what’s happening on the other side of the world in a small country named Swaziland. So many are entirely unaware of the conditions considered normal by their neighbors in nearby third-world countries. Or worse, they are aware of what is happening, but choose to pretend it doesn’t exist because it makes them uncomfortable, because it doesn’t seem like it could actually be real, because it seems too far away to worry about,  because they simply feel too insignificant to make a genuine difference, and so they don’t even try.

The thing is, you don’t have to go spend the month in Africa. You don’t have to sponsor a kid living in a slum. You don’t have to sell everything you own and donate it to the poor. But you can still take easy, non-sacrificial measures in order to make a difference. Educate yourself, educate others. Research nonprofits that do work that you’re passionate about, and get involved, whether that be in a local homeless shelter or at an orphanage in India. Know that the life you live here in Collin County, Texas is not at all normal compared to the rest of the world, and don’t ever take that life for granted.

To whom much is given, much is required. We are to use the gifts we have received, the opportunities we have, and the privileges we have been blessed with to help those who aren’t so fortunate. That is our purpose. Our calling. Our reason for being where we are: to go out and make the world a better place for all people.