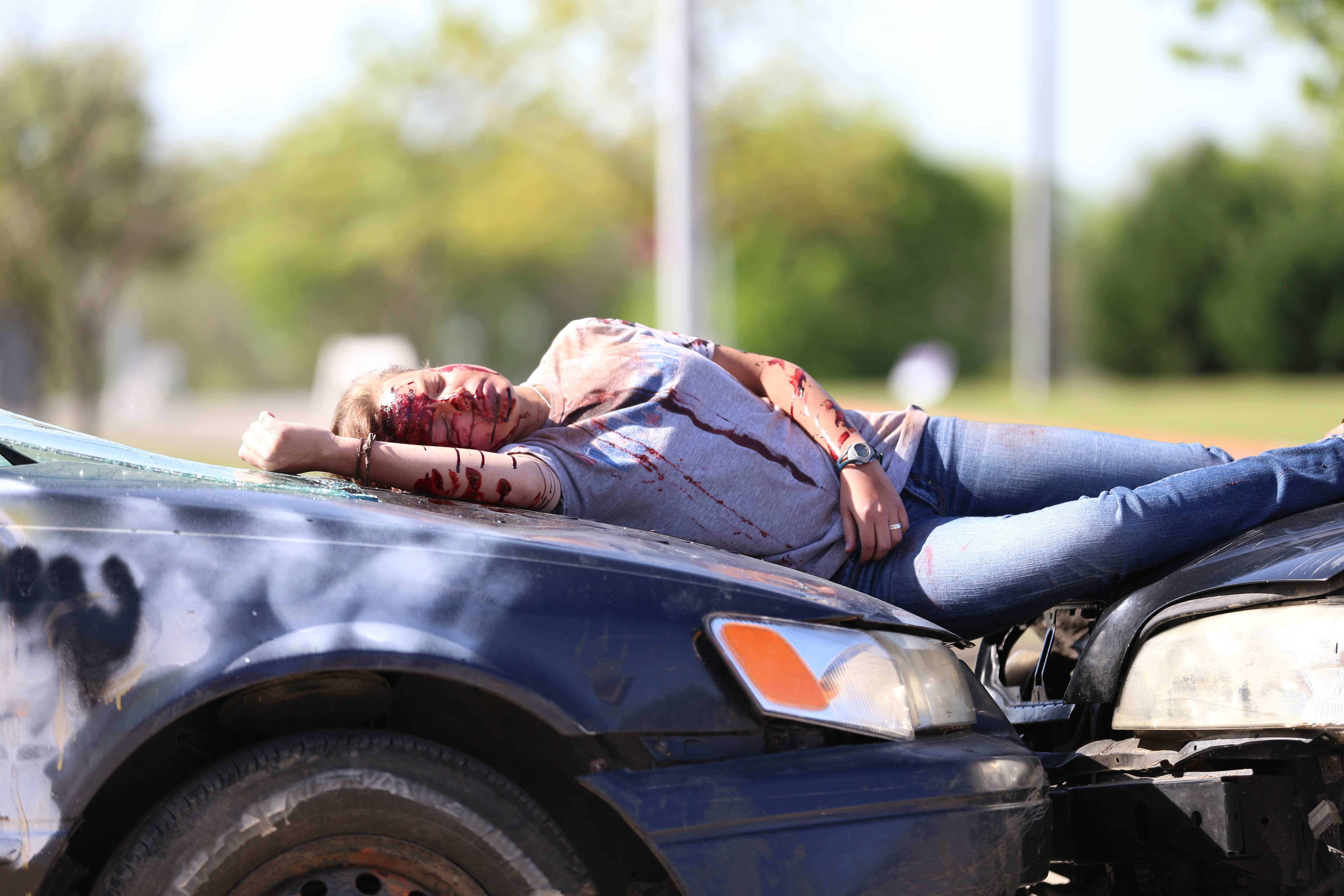 Part of the Shattered Dreams presentation showed Abby Bryant as a victim of a staged drinking and driving accident. (Stu Mair)

Part of the Shattered Dreams presentation showed Abby Bryant as a victim of a staged drinking and driving accident.

Clayton Bilke and his friends were just looking to have a little fun, an escape from the far too familiar walls of Lovejoy High School, and the prospect of worksheet after worksheet in their first period classes didn’t even stand a chance against a party with no parents home.

As the party’s crowd grew larger, the flow of liquor and volume of Future’s autotuned voice booming through the speakers increased as well. Everybody was enjoying themselves, playing beer pong and dancing with each other, believing this was a day they’d remember forever.

Somehow through their drunken haze, Clayton and his friend Paige Becker realized they were about to miss an important test and absolutely had to drive back to school. No thought was given to the countless beers and shots that had been consumed as the pair stumbled into the car. It didn’t even occur to Clayton that if he was having trouble simply finding the keyhole to start the engine, then maybe he shouldn’t be maneuvering a four ton car.

Andrew Hopkinson, Riley Burnette, and Abby Bryant were all headed back to school after an early morning extracurricular activity when Andrew spotted Clayton’s car on the way to the high school as well. He probably joked about how his friend was late once again until he realized that the car was headed straight towards them. By then it was too late.

The sirens from the ambulance and squad cars were blaring as Clayton lurched out of the crushed car and saw the rest of his life flash before him. The police officer’s questions were a mere buzz as his focus was on the firefighters who were prying his close friends out of the wreckage, whose fault rested on his shoulders. Surrounded by the blood and carnage and the rushed actions of the responders, the only untarnished thing that remained at the scene was the white sheet that laid over Abby’s lifeless body.

This story could go on to describe the frantic hospital scene as doctors struggled to find a pulse in Andrew, Riley’s disbelief that he would be paralyzed for the rest of his life, and how every day after, the parents had to wake up to the realization that their child was no longer alive. Luckily for everyone involved, this story didn’t end that way.

The realistic representation of a head-on collision caused by a drunk driver that was reenacted for students today was presented by Student Council with help of Lucas police officers, firefighters, paramedics, and the doctors at the Medical Center of McKinney as a part of the “Shattered Dreams” program.

“The importance of ‘Shattered Dreams’ is to show the dangers of drinking and driving in hopes that something like the reenactment doesn’t happen,” Lescher said.

It was difficult for me to digest at first, and I tried to make jokes with my friends to lighten the mood, but it really was a gut-wrenching sight.”

Becker said presenting the program in April was an intentional decision.

“The timing of this is set before prom and summer vacation so to make students think twice before doing something that could ruin or end their lives,” Becker said. “It’s an emotional experience and just being a part of the production process, we have seen how realistic it’s going to be; and by involving all the police and paramedics, it really creates a vivid representation.”

While the program also included statistics and raw information over the often fatal consequences of drunk driving, Becker and Lescher said the main focus of the day was to create the most realistic demonstration in order to create the biggest impact on the teenagers and make the experience as memorable as possible.

For sophomore Bretton Laboret, the students achieved their goal.

I was looking around at all the students out here watching and was just praying that the message gets across to them.”

“I had a hard time getting a good view of the scene when I came out of the school, but once I did it really shocked me,” Laboret said. “It was difficult for me to digest at first, and I tried to make jokes with my friends to lighten the mood, but it really was a gut-wrenching sight. Andrew Hopkinson is my captain on the soccer team and I got to know him well during the season, so seeing him with all the that blood and being carried out on the stretcher was surreal to me. Especially seeing the photos of him during the video, it made me think about what would happen if he really did die.”

Student Council began the planning of “Shattered Dreams” over six months ago in order to ensure students would have the most realistic experience as possible. Spanish teacher Seth Sartain said that he hopes students will really learn from the activities and not just be happy for the shortened day.

“I was looking around at all the students out here watching and was just praying that the message gets across to them,” Sartain said. “Members of my own family have been affected by accidents similar to this and so I wish students would take this to heart and learn the lessons without the consequences. I know it’s really easy for students to just look at the cool helicopter and all the first responders without considering the meaning of all this, so my fingers are crossed that the program benefits them.”

A mother’s point of view

Lisa Hopkinson, mother of senior Andrew Hopkinson who was shown dying as part of the video, said she had known about “Shattered Dreams” when her oldest son Alex Hopkinson experienced it while in high school, but didn’t understand its full extent and emotional impact until Andrew played a role in its production.

“I can honestly say I was amazed at how real the makeup work was for the injured students and  was truly taken back when I saw Andrew ‘made up’ for his role in the accident,” Hopkinson said. “Even knowing that Andrew was fine, being in the hospital for the filming somehow made it seem a bit real.  After he was all made up and I was in the trauma room with Andrew, all the nurses and doctors, I actually found myself shaking and when they declared him dead and I fell onto him because it all seemed so very real.

I actually found myself shaking and when they declared him dead and I fell onto him because it all seemed so very real.”

“I was truly numb and I pray that I never go through that, but I couldn’t get words out and so I just prayed. The whole reason I agreed to participate in this with Andrew is because I want young drivers and all drivers to think before they drive or get into the car with another driver. I think this exercise is very powerful and offers a life changing experience to all who watch.”

Hopkinson said she agreed to be a part of the exercise because of her previous exposure to the consequences of a driving while intoxicated. While in high school, she said she lost her good friend, Jason Jouett, to a drunk driving accident, even though Jouett had not consumed any alcohol and was the only passenger with a seat belt on. Hopkinson described the “void” that was left at school after his death.

“I will never forget that day at the school because it felt as if a dark, black cloud had enclosed our campus,” Hopkinson said. “The whole situation was so very sad and made even more sad by the fact that the life of the driver is still having difficulties with drugs and alcohol to this day. So many lives were significantly messed up by that one night.”

•Drunk driving costs the United States $132 billion per year.
• Over 1.1 million drivers were arrested in 2014 for driving under the influence of alcohol or narcotics.
• Every two minutes, a person is injured in a drunk driving crash.
• On average, two in three people will be involved in a drunk driving crash in their lifetime.
•In 2013, 28.7 million people admitted to driving under the influence of alcohol- that’s more than the population of Texas.

“Shattered Dreams” was developed by the Bexar County DWI Task Force Advisory Board on Underage Drinking in 1998 as an expansion of the “Every 15 Minutes” program introduced in Chico, Calif. Students yesterday witnessed “Every 15 minutes,” also known as the “Day of the Living Dead,” as student resource officer Joe Peebles and a grim reaper took a student out of class every 15 minutes, who later returned to class made to look dead with white make-up, and instructed not to speak for the rest of the day.

“I think it’s a real issue for students and ‘Shattered Dreams’ is a great cause,” said sophomore Bumper Pool, one of the students selected by grim reaper. “Even though it wasn’t really an exciting day for me because I wasn’t able to talk, I enjoyed being a part of it. There are kids all around the country who get in similar situations, so showing awareness and the realization of what can happen is really important.”

Those involved in responding to similar accidents as those represented today, such as police officers and paramedics, are frequently shown the effects and consequences drunk driving has on people. Though he now finds his duties to the community as student resource officer, Peebles said he remembers his experiences being on patrol for the last seven to eight years.

“While on patrol, part of my job was responding to drunk driving accidents and dealing with the drunk drivers themselves,” Peebles said. “From my personal experience, I believe this program does a great job in providing that immediate shock that real accidents give. I think most kids don’t realize the dangers of drinking and driving because, just like most people that drink and drive, they think they are going to be OK, not get into an accident, and not go to jail or anything of that sort.”

Peebles cited statistics showing those who were arrested for driving under the influence had “driven drunk at least 80 times prior to getting the first DUI.”

“So if you think about that, there’s a lot of drunk drivers on the road,” Peebles said. “And the problem with kids is that they are often inexperienced driving and have a lot of distractions to deal with, even without the consumption of alcohol.” 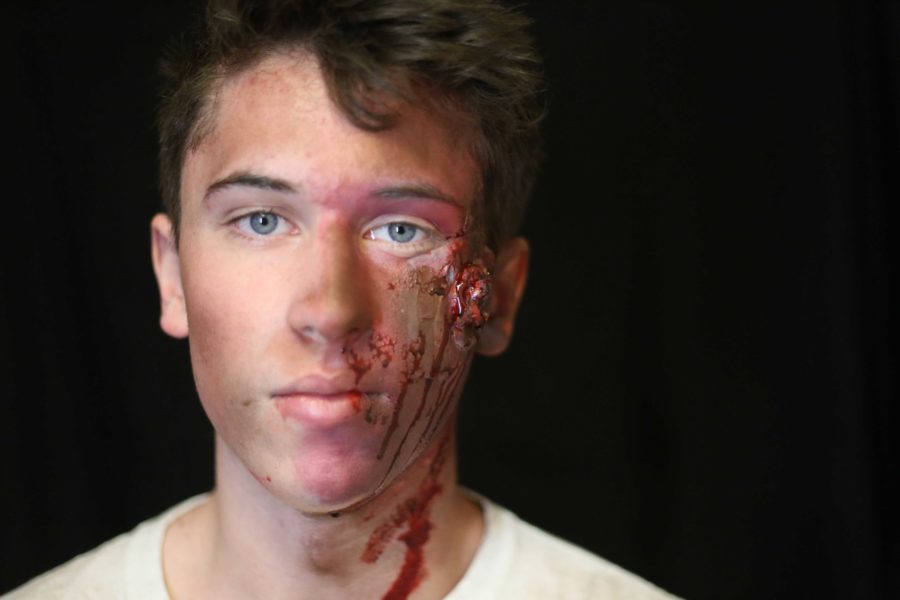 Gallery|11 Photos
Stu Mair
One of the passengers in the car that was struck in the simulation was Riley Burnette, a junior at Lovejoy.
Leave a Comment