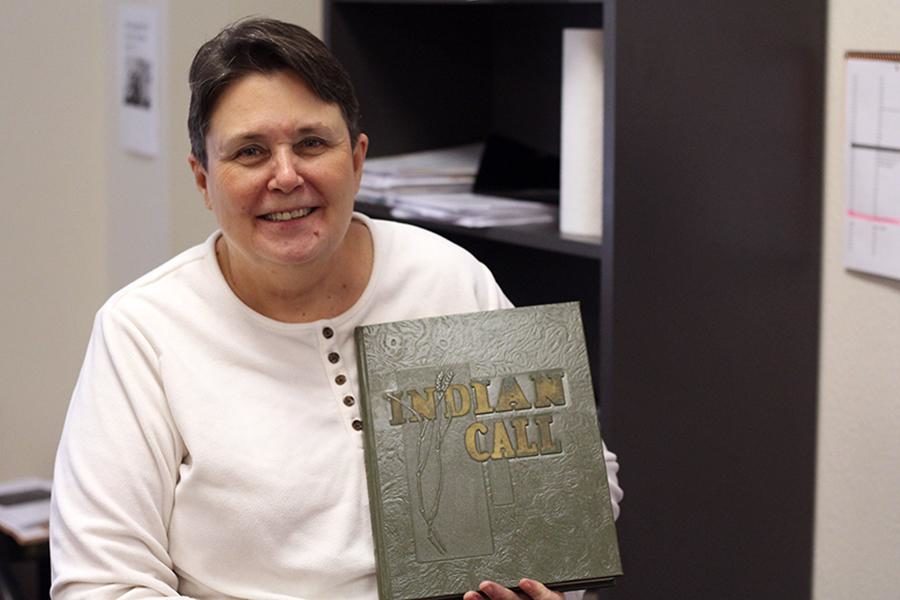 Social studies teacher Homa Lewis grew up in multiple places throughout the Americas, and after changing career paths multiple times, has now been teaching for more than 20 years.

The not-so-secret life of Homa Lewis

The morning bell rings, sounding the start of another school day. Today, AP Human Geography teacher Homa Lewis will be teaching her students about the concept of culture and how it affects people’s behavior and practices. For her students, the idea of a culture other than their own can be foreign, but for Lewis, experiencing new cultures is something she knows all too well.

Lewis was born in the U.S., but due to her dad’s job with Halbert and Company in the oil field and his desire to move up in the company, her family chose to relocate to Venezuela. As a young child, Lewis knew little about the world around her before the move.

“We left [for Venezuela] from New Orleans,” Lewis said. “We were there for a week before we left the country and it was really the first time that I had ever seen a black person or really a poor person and there were people on the streets begging. We stayed in one of the nicer hotels and there was a race riot so that was kinda shocking. And then we went to Venezuela and all the sudden we were in the minority.”

While there, Lewis lived in community with other American children and families. She attended an American tutoring school each morning from 7:30 a.m. to noon, and then had free time in the afternoon

…I think it made me really appreciate what we had in the United States. I think the experience really marked me.”

“I think one time in the camp I lived in, there were 26 kids, and we just ran wild,” Lewis said. “We just did whatever we wanted. It was safe so we stayed in the camp. There was a country club that had movies on Sunday, Tuesday, and Friday, and I think we went to most of the movies and it was an open air movie theatre so we could see the first satellites. It was a very neat experience.”

Even though she lived a relatively “normal” life in Venezuela, Lewis still experienced and witnessed things that can be easy to ignore back in the states.

“It really opened my eyes to how other people lived,” Lewis said. “Right outside the camp there was a mud hut that people lived in, and I think it made me really appreciate what we had in the United States. I think the experience really marked me.”

SCHOOL BACK IN THE STATES

After four years, Lewis’s dad was offered the position of District Manager in Hays, Kansas, and her family packed up and moved. At first, the challenge of transitioning into a new culture and making friends as a freshman in high school was difficult.

“The school [in Venezuela], it was an American tutoring school so in the seventh grade, there were just three of us, so to come back to the states and where are like 30 people in each class and you moved around was really a shock for me,” Lewis said. “I was known as the girl who could speak Spanish and people would come up to me in the halls and say ‘say something in Spanish’ and I was very shy and I hated, hated, hated being known as the girl who spoke Spanish.”

On top of being already shy, Lewis faced difficulty making new friends and finding her place.

“Hays, Kansas was a small college town,” Lewis said. “Because not very many people had moved, it was a very cliquish town and it was like if you hadn’t started kindergarten with these kids, you never got into the in-group which was, you know, kinda hard.”

At school, Lewis wrote for the school newspaper, was a member of Quill and Scroll, a journalism honor society, and played tennis. Lewis was also a member of a “very not-school-sponsored” girls basketball team.

“[For the basketball team] we had to fight to even get a gym to practice in,” Lewis said. “When I was a sophomore, the basketball girls marched into the principal’s office and kinda had a sit-in until he agreed to talk to us and we asked for gym time.”

After her junior year in Hays, Lewis’s dad was again relocated to Midland, Texas where Lewis would complete her final year of high school. During this time, the Civil Rights Movement and the Vietnam War became hot topics. Fashion and what was acceptable for women to wear also began to evolve.

“I got sent home one time for dress code violation because you couldn’t even wear split skirts, and my mother bought me one, and it came down right to the wrist and the knee, but because it was a split skirt, I got sent home.” Lewis said. “My mother was so mad. This was the time when skirts were getting pretty short, and my mother was like ‘you’re covered up.’ I promised that I would go discuss this with the principle because I was afraid if she went, I would get kicked out of school.”

After graduating high school, Lewis enrolled in the honors science program at Texas Tech University. However, after a semester in a zoology course, she realized that science was not for her.

“All the labs were in the basement, and my fruit flies died, and I was like I don’t want to spend my life in basement laboratories with insects,” Lewis said. “So I switched to secondary education. My dad had been a teacher before he moved to Halbert, so I was like ‘okay I’ll be a teacher.’”

All the labs were in the basement, and my fruit flies died, and I was like I don’t want to spend my life in basement laboratories with insects. ”

Even with a college degree in teaching, Lewis spent several years in alternative fields of occupation.

“After college, I was, you know, in love, and we were gonna get married and move to Houston,” Lewis said. “Lubbock and Midland were the biggest places I had ever lived and so I was like ‘I’m not sure if I’m ready to teach in a big school district’ so I worked for a big oil service company and I started out as a switchboard operator with those old timey boards, then I did HR and I published the company newsletter until they decided they wanted a real journalism person, so they hired a man, and I quit the company.”

Even though I think woman should work if they want to, I think being able to stay home with babies is wonderful. ”

When Lewis finally felt that she was ready to teach, she found yet another reason to delay her career; a reason that would change her life forever.

“I started substituting at Lamar High School and loved it and I had a contract, but I was also pregnant and our plan was always that I would stay home with the kids,” Lewis said. “I was more traditional than what I think people would expect. Even though I think woman should work if they want to, I think being able to stay home with babies is wonderful. I was home with the kids for about five years, then my husband and I separated and divorced, and I started teaching.”

Lewis worked for 19 years as a teacher in Plano ISD. Having children of her own and seeing how they handled their time in public education gave Lewis a unique perspective on her career as a teacher.

“Each of my kids were different,” Lewis said. “My older daughter was one of those straight A students, my son was GT, and if he wasn’t interested in something, hell could freeze before he would do it. And then my younger daughter was on the 504 plan. I really realized that kids have different needs and that it was my job as a teacher to meet those needs and so there’s a lot of things that I do because that’s what my kids needed to do.”

After teaching, Lewis became a legal assistant for Baker and Mckenzie and was enrolled in SMU’s law program, taking classes in the evening.

“Well, I thought that it would be something that would be interesting and that would suit my skill set,” Lewis said. “I liked research, I liked doing math.”

DISCOVERING A PASSION FOR TEACHING

Lewis worked in law for a year, but did not enjoy it “because the people there were wacks.” The lady that owned the company later became ill, and the staff was reduced. From there, Lewis was recruited by colleague Bev Smith to come to LHS.

“[Ms. Lewis and I] met in 1982 when I was doing my student teaching in Plano and she was a world history teacher,” Smith said. “Lovejoy was needing another history teacher who was AP, and who had experience, and someone who could come in the middle of the year. I just said I know someone who has all the requirements that we need to teach the courses that we need.”

Even though she has held several unique jobs, Lewis feels that working with high school students is where she belongs.

“I love teaching. I think this is what I was made for. This is what I do best,” Lewis said. “I’m very much an introvert, but there’s something that happens when I teach and I kinda come out. I can be an extravert in the classroom but then I have to go home and rest.”

I feel like [Lewis], if anybody, understands how to help a student wrap their mind around what they’re learning in a course set that is challenging and requires you to put forth some effort. ”

Coworkers recognize Lewis’s gift and passion for teaching and believe that it is the reason for her success.

“She works so hard and she gets kids, which is really good. She knows her content,” Smith said. “I feel like she, if anybody, understands how to help a student wrap their mind around what they’re learning in a course set that is challenging and requires you to put forth some effort. She wants students to be successful in their own right and feel good about it.”

While most of her teaching comes from a textbook, Lewis has also learned several lessons from her personal life that she desires to instill in her students.