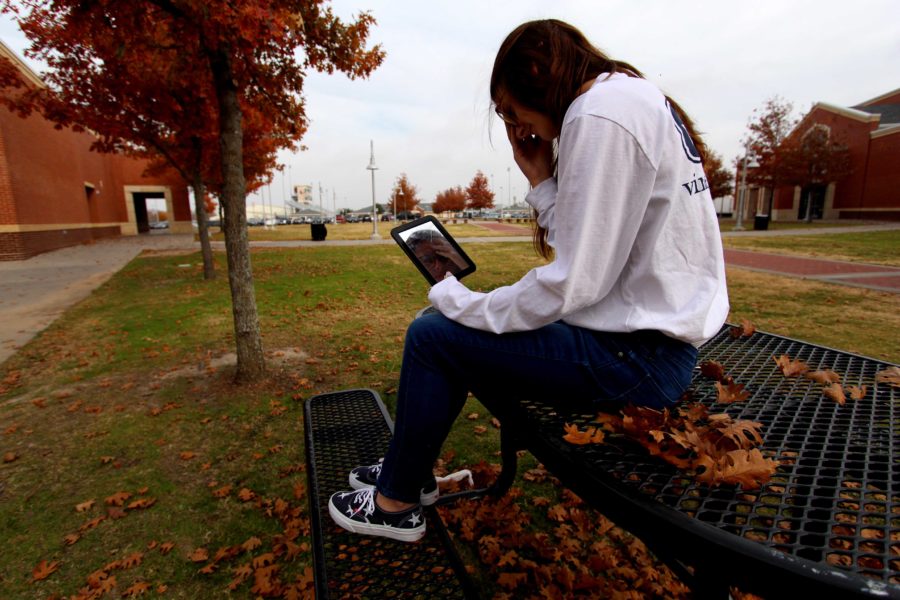 Body image has become the worst enemy, constant companion, and obsession to many students. Many people believe that social media is the catalyst for creating the issue of negative body image.

The girl in the mirror

In a society that seems to revolve around the material and the physical, many teens suffer from body image issues

The girl’s hand reaches out from under a mountain of soft blankets and silences her buzzing phone. She rubs the sleep from her eyes and blinks a few times, and slowly her blurry room comes into focus, piece-by-piece, and then she groans, slowly rises, and walks into her bathroom.

There, she has yet another encounter with her worst enemy.

She stares at her foe with fearful eyes. She hates the way her rival makes her feel uncomfortable, unconfident, and insignificant in her own skin.

Her enemy, the mirror, has been picking her apart for years along with its close friends, the magazine and society. Magazines can be seen strewn in frustration around the girl’s room, and articles about losing weight can be found in the girl’s search history on her phone.

She walks to the shower to get ready for the day, and she tries to ignore the shame weighing down her heart as she passes the toilet that she made herself throw up into the night before.

…Even though there’s lots written about [body image] and the not positive things that happen with an intense focus on body image, it seems to me that really and truly the focus and the importance of individual body image is more important than ever.”

The National Eating Disorders Association’s website describes body image as “how you see yourself when you look in the mirror or when you picture yourself in your mind.” In today’s society that revolves around the material and the physical, many people, especially teens, suffer from body image issues.

“I bet it’s been an issue as long as there have been people, and we are comparing ourselves with those around us,” nurse Jeannie Haines said. “But it just seems to me that, especially in my lifetime and increasingly so every year, even though there’s lots written about it and the not-positive things that happen with an intense focus on body image, it seems to me that really and truly the focus and the importance of individual body image is more important than ever.”

Former student Nicole Bartel knows first-hand the struggles of body image issues and eating disorders, as she experienced these things in high school.

“I struggled with becoming obsessed with outside things,” Bartel said. “My focus of eating and kind of [my focus] on myself got lost in high school. I think at that point I was really involved with a lot of activities and I kind of did not have a lot of time to take care of myself. I struggled with identifying who I was and that led to extreme limits, I guess you could call them. So [I] kind of just [went] toward not taking care of myself and rather taking care of other people because that was a lot easier for me.”

Bartel endured a long road to recovery, but she still experiences obstacles everyday.

“I left some of the activities I was involved with and I started going to a counselor,” Bartel said. “I got a personal trainer, and then I saw a nutritionist because once you have an eating disorder it’s an ongoing recovery process. I really found assistance with my relationship with Christ and also just having the support around me like my family and some professionals in my life that really help me when I need it, because when life gets really busy, it’s easy to fall back into those patterns.

“So, having that support around me has really helped. It’s just knowing and understanding when you go through things you may take on these unhealthy habits. I did a lot of work in counseling so I have a lot of tools that I’ve learned, but it’s an ongoing journey. I experience different challenges everyday.”

High school is often a stressful, confusing time for students. It’s a time filled with challenges, new experiences, and questions, and it’s also a time when many teens begin to feel negatively about their bodies.

“Definitely in high school it is hard to love yourself because there’s so much judgement and there’s so much hatred,” Bartel said. “As much as I would like to say there isn’t, there is. But there also can be love. There can be peace. We just have to choose. We have to choose everyday to speak love and choose everyday to speak kindness to each other.”

The glitz and glamour of golden Hollywood stars has also contributed to the fire of body image issues. People are constantly gawking in awe and jealousy at the lives and physical appearances of celebrities. They begin to compare themselves to such outrageous, superficial standards of beauty, but it’s important to remember all of the unusual and unrealistic things that go into making celebrities look flawless.

“Honestly I think that TV and social media especially are big influences,” Haines said. “It just seems like no matter where you are you’re kind of bombarded with somebody else’s image. Those picture perfect Victoria Secret models, movie stars, and reality show stars have personal trainers and makeup artists and lots of money spent on clothing. It’s just not the reality of a real world and a real person, but unfortunately, that’s what we each compare ourselves to, and that is really not attainable for most of us because we’re not perfect. We’re human beings.”

Negative body image, which can lead to isolation, low self-esteem, anxiety, depression, suicide, liver and kidney damage, and malnutrition, is also contributed to by social media and the mindset that has been built around it.

You do have control over your thoughts. You do not have to believe that voice in your head that says you are not good enough. Teenagers just don’t know yet that it is a choice.”

“Social media is a big contributor to eating disorders, and if we don’t love who we are, then social media is going to destroy that side of us,” Bartel said. “It’s hard in our society because we’re so based on looks and we’re so on materialistic things that we forget to go inside. It starts within, and I feel like a big part of it is these girls do not love who they really are. I think we lose sight of who God created us to be and loving that creation that He made us to be.”

A negative body image distorts the thinking process and takes a severe mental toll on a person.

“It takes a lot of mental energy to obsess about anything,” counselor Lissa Testa said. “If a student is obsessing about their body, it is at the expense of other things. Your attention is better spent on friendships, school work, and being healthy. What you tell yourself or fill your mind with affects how you feel about yourself. You do have control over your thoughts. You do not have to believe that voice in your head that says you are not good enough. Teenagers just don’t know yet that it is a choice.”

Haines said that she once worked with a woman who was “so pretty and attractive, and just a little, teeny, thin, bird-like person,” but the woman saw herself as “too fat.” Sometimes people develop a warped, distorted view of themselves in which they see their bodies as it doesn’t actually appear, and this warped perspective can be caused and influenced by messages that people send.

“Sometimes [it’s] the subliminal messages that others give us,” Haines said. “For example, in a family where perhaps really good looks is a major importance the messages are constantly sent to the children, ‘Don’t eat that you’ll get fat,’ and you hear all that messaging to the point that it becomes almost over messaging. There are some families that really do put a lot of emphasis on physical attributes, and so kids when they’re developing and learning and kind of personalities are being molded if that’s a bombardment of what they hear. It really can get completely skewed. If for some reason we believe we are ugly, that’s what we see.”

While body image problems are often linked to girls, boys experience it too.

“There is still the pressure conform,” Testa said. “They just may have a different measuring stick. Good looks, athleticism, and popularity are desirable traits for high school boys. As they get older, it seems monetary success and status become what is valued most.”

When a person is dissatisfied with their body, their insecurities follow them around and affect their perspectives.

Though many, including Bartel, have shared inspiring stories of triumph over their discontent with their appearances and speak out against negative body image, the problem has not disappeared. The issue prompted Bartel to turn to social media to spread her message.

“I created a Facebook page and a video blog in order to promote a safe place for girls to come and ultimately be vulnerable and to be accepted and a place where they didn’t have to fear who they were or how they looked,” Bartel said. “I created videos talking about my journey and my story and things I’ve struggled with because an eating disorder is more than the relationship with the food.

“It goes way deeper than that. It is an emotional, psychological kind of aspect that impacts how you feel about food, and you just feel so out of control that you control your food because you can’t control the outside factors. So, a part of my videos was talking a lot about trust and forgiveness and shame and just going through the aspects of what I experienced in my journey.”

Love. It needs to come back with loving themselves because ultimately you have to love yourself.”

There are things people can do in order to take the first steps to a life free of concern over appearances, and one of the biggest aids is something everyone has inside themselves.

“Love. It needs to come back with loving themselves because ultimately you have to love yourself,” Bartel said. “I think having good role models in your life that promote a healthy body awareness and being really comfortable with who you are [helps].”

While overcoming body image issues is no easy task, it is possible, especially with the support of friends and family and the community. People must stand tall and strong against the cage of shame, discomfort, and lack of confidence their own minds have created and help others escape their prison as well. Bartel said it begins with a personal decision.