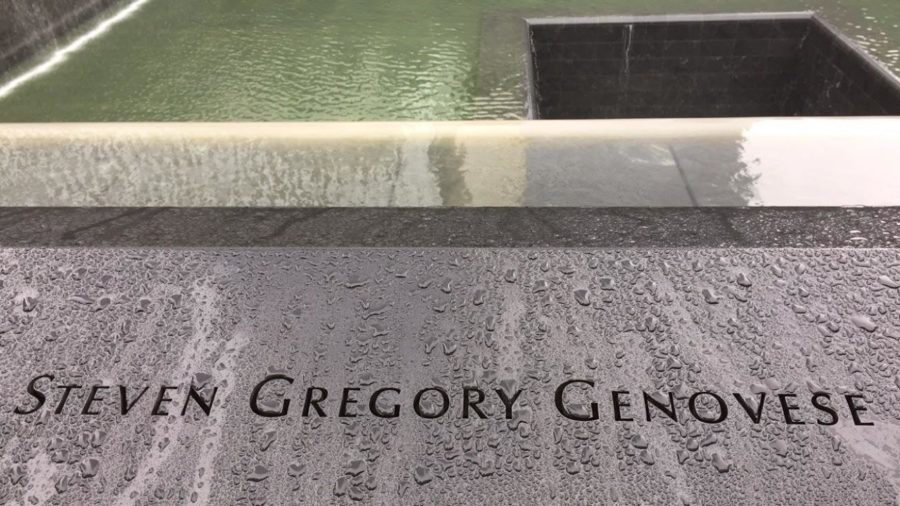 Sophomore Jacqueline Genovese’s father’s name is etched into the North Pool at the 9/11 memorial in New York City, the former site of the World Trade Center.

Moving on in loving memory

Local family recounts loss of father and husband Steven Genovese, who was working in the North Tower during Sept. 11 terrorist attacks

Lovejoy mother Shelly Genovese Calhoun and her eighteen month-old daughter Jacqueline were in a deep slumber in their home in Basking Ridge, NJ. It was Tuesday morning, and her husband, Steven Genovese, kissed her cheek and said goodbye before going off to work at the World Trade Center. Shelly drank in the wondrous sleep that was so difficult to obtain since her daughter would wake up in the night.

But soon she would be awakened from her peaceful dreams and be greeted by a horrible nightmare.

Shelly was awakened by her mother and friend who were in town, telling her the phone had been ringing nonstop. Shelly got out of bed and turned on the TV.

The tragedy of 9/11 had begun, and her husband was in one of the towers.

“When I turned on the television, it was all over the news, it was just everywhere,” Shelly said. “Of course I saw my husband’s building, and he worked in World Trade Center number two, the one with the antenna on the top of it. So, I looked and I saw that the plane had hit and I kept kind of counting the floors, just thinking, ‘Where was he?’ because he was on the 104th floor.”

Shelly tried to call her husband, but he didn’t answer. She was left to wait, and she still had hope that he was safe.

“I didn’t assume the worst because you don’t ever think something like that would happen to you,” Shelly said. “I never in a million years would’ve ever thought that such a horrible tragedy could happen. You see it happen to other people, but I was young and had a young baby and a young family, and I just thought surely he’s okay and he’s going to make it home.”

This wasn’t the first time her husband had survived a tragic attack. He had actually made it out of the World Trade Center after an underground bomb went off in 1993. She said she thought, “if anybody could get out, then he can get out.” Shelly prayed for her husband’s safety, but her wall of strength soon came down.

“I think the first time that I really broke down and fell apart and really cried out was when the tower collapsed,” Shelly said. “Tower one collapsed first, and so once it collapsed, I remember thinking, ‘Thank God that wasn’t my husband’s building.’ Not that I wasn’t sad for everybody else but I just thought, ‘Oh my God there’s still hope. He’s coming down right now, he’s walking down those stairs and he’ll be here.’”

However, the second tower collapsed moments later and was reduced to rubble.

“That’s of course when I fell to the ground and cried, screamed, and cried out to God,” Shelly said. “Still, even at that point, I still had a real sense of hope that he would still come home. I just really thought that God was going to bring him home and he was going to be there and we were going to have dinner that night and everything was going to be okay.”

Shelly made dinner that night, including strawberry bread, her husband’s favorite. She carried on as if he were coming back, but he never did. However, Shelly said she believes that everything happens for a reason.

“God could’ve, of course, brought him through, but that wasn’t His plan.”

The attack deeply cut the community as well as the entire nation. Shelly leaned heavily on her faith in God for guidance and healing, and she began to travel and tell her story and tell about the strength she gained through her belief in God at churches, women’s conferences, and colleges.

“I just talked about how God got us through the tragedy, because not only was it thrown in our face every time we turned on the TV, but it just surrounded us,” Shelly said. “I went around and spoke about how through the grace of God that, you know, He just held us through it all and took care of us, and something that I thought that I could’ve never gotten through, He just kind of carried us through.”

Shelly has recently been working on a novel about her and the community’s experience with 9/11. It has been a three-year process as it is difficult to find time to work on it.

Shelly said she felt the book, which will talk about triumphing over tragedies and God’s love to those in pain, was something she was “called to do.” The book should be completed and published by the 15th anniversary of the attack.

Six months after the attacks, Shelly moved to back to her original home in Texas to be near  her parents and brother and friends and church. She remarried six years later to Heath Calhoun, with whom she had a son. Her daughter Jacqueline is now a sophomore, and as she grew older she found out about her father.

“I’m really open about it because it didn’t really affect me as much as it did her,” Jacqueline said. “Like, of course it’s still heartbreaking, but I didn’t know him so I can’t really know what I lost, so I can’t be sad about it. I’m personally thankful [I didn’t know him], because I know loss on me would be really devastating and tragic. Also, if I was older, I would feel so much guilt that it was my fault. Like, why I didn’t I wake up, why didn’t I tell him to stay home and stuff like that.”

Jacqueline has been told she resembles her father both physically, like her height, and in her inner qualities. She said she’s grateful to carry around a piece of her father and his legacy inside her.

“Everyone in my family that knew him is always like, ‘Oh my gosh, you have his intelligence, you have his sarcastic being, you even have his inflection of voice’,” Jacqueline said. “I like that. I’ll probably always keep my last name, because my brother doesn’t have his last name and that’ll be sad because it’ll move on, like the Genovese name will kind of be gone, I guess, if I get married and lose it.”

Jaqueline’s presence and resemblance to her father was especially important to Shelly. It gave her motivation to keep being who she was, and keep putting in an effort to live.

“I had Jaqueline, which was a ray of hope, just to know I had this precious child that we created and loved,” Shelly said. “She got me up and out of bed every morning because I knew she couldn’t lose a mom and a dad. She had to have a mom there.”

Fourteen years after his death, Shelly still says she believes that she got through her husband’s passing by the grace of God.

Just reading my Bible and getting into God’s word and staying concentrated on that was the only way I was able to make it through.”

“I could just feel the prayers,” Shelly said. “It just kind of was inspiring just to know that people were out there that loved me so much. Even in the midst of going through something you just see this goodness in a lot of people. Just reading my Bible and getting into God’s word and staying concentrated on that instead of all the bad that was going on, I think that was the only way I was able to make it through.”