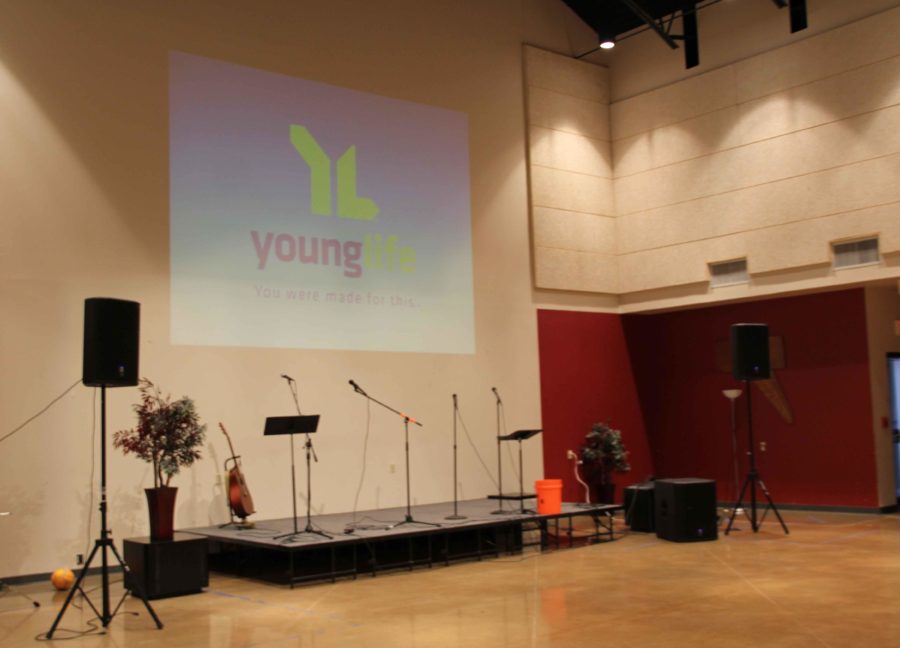 The Allen/Lovejoy area YoungLife clubs are held at Greenville Oaks Church on Mondays and begin at 7:29.

The Christian youth ministry Young Life is an international organization that has been around since 1941, when it was founded in Texas. Every Monday night at 7:29 p.m. exactly, high school students meet at Young Life’s “Club” to participate in games and listen to a Christian message. In recent years, however, the organization has experienced controversy because it can sometimes attract people who might not adhere to Christian values.

“Young Life is something for people who don’t know Christ, who want to experience and learn more about God and grow in their relationship,” junior Aly White said. “A lot of people say that Young Life is bad, and a lot of bad kids go to Young Life, and that it’s not actually Christian. But the whole purpose is for kids who don’t know God to find him. So they usually come from rough backgrounds.”

Young Life’s purpose is to create what high school Young Life leader Katy Park calls “friendship evangelism.” Park and other leaders often visit nearby high schools to mentor students in a nonjudgmental way so that the leaders will be more likely to, as Park says, “earn the right to be heard.”

While the goal of Young Life is to introduce adolescents to Jesus Christ, some people on campus question the organization.

“I think some people view Young Life negatively because of the actions of a few,” junior Grady Wells said. “I’ve heard some things that people have said about it, and it makes the whole group look bad.”

A lot of people say that Young Life is bad, and a lot of bad kids go to Young Life, and that it’s not actually Christian. But the whole purpose is for kids who don’t know God to find him. So they usually come from rough backgrounds.”

Although there is a religious component to every weekly meeting, Young Life also incorporates games to create a comfortable atmosphere and make teens feel welcome.

“One game we did when I was there was, you have to say something embarrassing that’s happened to you, like if you’ve peed your pants in public, which I did when I was little,” White said. “So if you have before, then you go to the three people next to you and you sit on their lap, and you don’t know them. It’s awkward, but you get to know them.”

However, some students say that Young Life’s attempt at creating a fun atmosphere does not coincide with its mission.

“Personally, I think that it’s more of a social event,” junior Morgan Garrett said. “For a lot of the people that go, how they represent themselves outside of Young Life doesn’t match up with their beliefs.”

But for the people at Young Life this is purposeful as the group tries to make Monday night club as attractive as possible for students who might otherwise never set foot in a church setting.

“Club we call ‘a party with a purpose,’ or ‘controlled chaos,’” Park said. “We do play outrageous games, and it’s to break down walls and have kids feel comfortable and loved regardless of their past or home life. We love every kid right where they are. And then at the end of club we have a presentation of the gospel every time.”

The efforts of the ministry’s leaders are not supported by some students with religious backgrounds.

“Personally I am a complete supporter of people participating in religious organizations,” junior Nate Wutzke said. “However, I feel like Young Life has a super bad reputation. I think those affiliated with Young Life should practice what they preach and be who they say they are. Having spiritual connections is so meaningful, but it means nothing if you don’t devote your life to your religion’s teachings.”

At Young Life camp, students who are 18 and older even have access to a smoke pit, as a way, according to Park, to “get rid of any reason that any kid may not go” to the camp.

“It’s for a lot of kids who like to smoke cigarettes,” White said. “They go and feel comfortable and feel like they’re at home. And that can be really controversial, because why would you do that at a Christian camp? It’s to make them feel comfortable enough to reach out to them, so by the end of camp you can have a transformation.”

Young Life is not affiliated with any church, which, according to Park, is a reason that people tend to misinterpret the intentions behind the games and icebreakers.

“It’s more for people that aren’t churchgoers, people that want a fun environment,” LHS DOLLS Chaplain senior Morgan Hykin said. “They’re just people that are going to be there to be aware of it. They might sound like hypocrites, but really it’s for those people that are never going to get any other experience besides that.”

Compared to the other Christian organizations on campus, such as DOLLS or FCA, Young Life is known for appealing to students who are less committed to serious discussion.

“Young Life is more about finding Christ, but FCA is more about bringing your Bible and studying it,” senior Sarah Bower said. “That’s why so many people from Allen will go. Most of them aren’t Christians, haven’t been raised in a home that has a heavy Christian influence and some of them don’t even have families, so they’ll come to Young Life and find Christ in the 10 or 15 minutes that they talk about it.”

According to Park, Young Life exists to introduce people to the message and then funnel them into a more serious organization, like FCA.

“It’s not about studying the Bible as much as it is getting people to come and find Christ,” Bower said. “When we go to Young Life camp, that’s when we bring our Bibles and really start to dive into God’s word, which is what people in FCA think we should do all the time. But Young Life Club is just about getting them their first exposure to Christ.”

Park says that Young Life is dedicated to the simple goal of attracting people to the Christian message.

Park says that while leaders understand why Young Life can seem controversial, they are focused on teaching students in the time that is set aside for the message at Club and at camp.

“There are a lot of preconceived notions at Lovejoy,” Park said. “Usually it’s just something that someone has heard or something that’s happened in the past, and people will take a little bit of information and judge Young Life. We love Jesus and we want people to know Jesus. I want Lovejoy High School to give Young Life a chance, because our end goal is for people to know the Lord.”