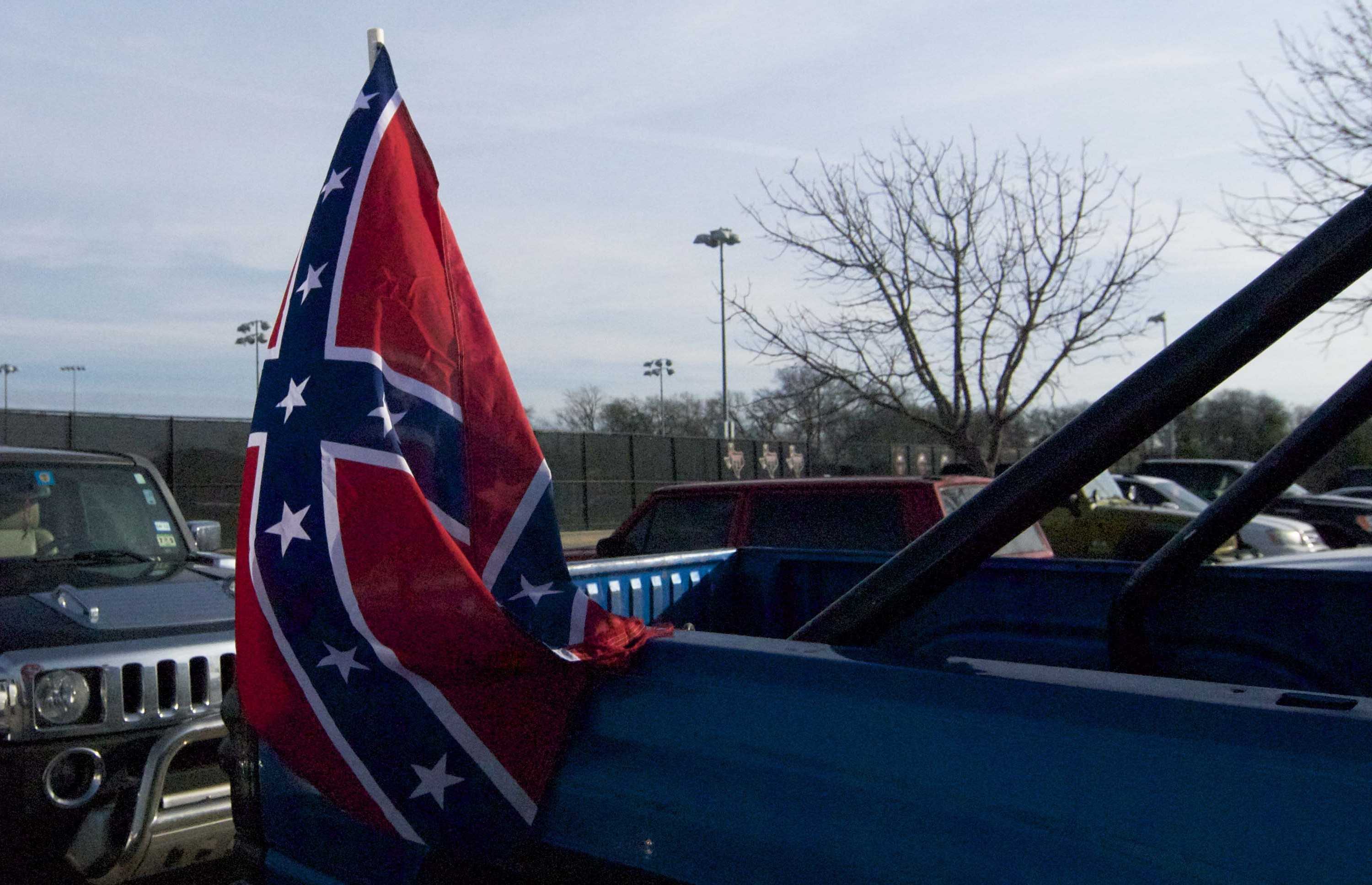 A flag of pride to some, a sign of racism to others

School prohibits the wearing or displaying Confederate flag on campus

150 years after the Civil War ended and the Union was brought back together, some people in the South still acknowledge the Confederacy by flying rebel flags. Multiple students on campus can be seen with Confederate merchandise, including flags on cars, clothes, or other visible accessories, despite the negative undertones many people have surrounding the Confederacy.

It’s not meant to come across as offensive, like some people take it.”

Junior Josh Shewmake is aware of the impression of prejudice that is often associated with the Confederate flag. He has the flag on the headliner of his truck and flies it often as he can separate the flag from its more controversial aspects.

“Nowadays, it means more of like, southern pride,” Shewmake said. “It’s not meant to come across as offensive, like some people take it. It’s more of like, an older generation of self-work and just pride in being yourself, and being independent.”

While most people associate the Confederate flag with slavery, sophomore Davis DeShields, who owns a wallet and clothes with the flag, believes it has “nothing” to do with slavery.

“They actually fought on the southern side, the slaves did, so the fact that people think it’s about slavery is actually kind of funny,” DeShields said. “It’s honestly what they believe it is and all that, if people take offense to it, they just need to understand that it doesn’t have anything to do with slavery. It’s showing that the slaves actually fought for the southern side, which shows that they helped, and they actually had that flag whenever they were doing it.”

Deshield’s perception isn’t uncommon, but fewer than one percent of the soldiers that fought for for the South during the Civil War were freedmen or slaves, and all were barred from enlisting until 1865, but an estimated 180,000 freedmen and slaves fought for the Union, which amounts to about 10 percent of the Union army.

“The reason that blacks fought for the South is because the choice was to fight or get shot,” AP U.S. History teacher Brian Erskine said. “Slave owners would send their slaves to fight or to do the awful work, like carrying the flag, which is like a big target. So that wasn’t fair to them.”

But people who support wearing the flag say that it implies living in the South more than it implies the negative aspects associated with the Confederacy and the Civil War. In addition to wearing the flag to school, junior Cody Cummings has the rebel flag on his ceiling, his truck, and his wallet.

Regardless of any harmless intentions, some argue that the Confederate flag and the principles that are associated with it should not be glorified.

“The Civil War accomplished two things,” Erskine said. “It killed a lot of people, and it created about 80 years worth of racism. So some people will say that they have a claim to their heritage, or they have some kind of right to display it, as a way to remember. Well what are you remembering? And so what I suspect is that most of the people who display the Confederate flag are not educated about what they’re really doing.”

Recently, administrators have noticed the rebel flag on clothing, and have restricted students from wearing it, asking them to change clothes if it is visible.

People think that just because I fly a rebel flag, you’re racist, because the Civil War, civil rights, African Americans, slavery, all that.”

“I’ve been told multiple times that I’m no longer allowed to wear [the Confederate flag], and I still do,” Shewmake said. “In the student code of conduct, there is nothing that says I’m not allowed to, but the principals are on me about wearing it, so now all my friends are wearing it, just because. I think you should be able to wear whatever you want.”

“We’re actually considering that part of the “hate slogan,” which is under number one in prohibited clothing,” associate principal Teresa Dodson said. “And if you really go out and do enough research on the Confederate flag, what you’ll see is that there’s been enough controversy around that particularly in schools where it is viewed that way. So we’ve had to say, yes, at Lovejoy High School, it’s a prohibited item.”

Other students on campus, both black and white, recognize the controversy surrounding the rebel flag.

“The people who waved Confederate flags around in the Civil War are the ones who wanted slavery around,” junior Ben Ominara said. “That’s offensive, ignorant, and narrow-minded.”

Administrators and other people on campus argue that people should not wear Confederate flags to school because it is an item that has, in the minds of many, an inextricable connection to racism.

For those who consider it to be “a southern roots thing,” publicly flying the flag is not meant to condone the values that Confederates stood for during the Civil War.

7 Responses to “A flag of pride to some, a sign of racism to others”