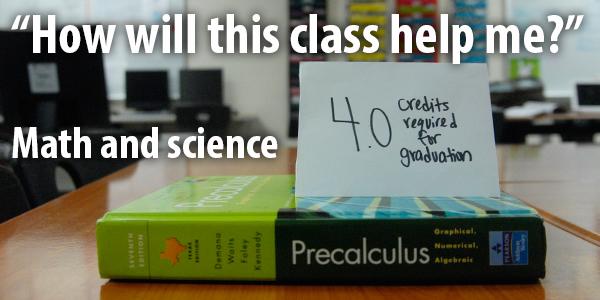 “Right, because I’m really going to be using Calculus and Trigonometry after I graduate.”

“Why does it matter if America is falling behind other nations in school? We’re still the best!”

“Because, really, someone is going to whip out a right triangle and make me use the Pythagorean Theorem.”

Science and technology form the basis for the nation’s success in the international economy and marketplace, healthcare and public safety, defense, and countless other fields, and is essential to teaching tomorrow’s leaders critical thinking and problem solving skills.

“International comparisons of student achievement show that U.S. K-12 students’ performance in science and mathematics is mediocre compared with that of students in other countries, especially those in East Asia,” according to the National Science Foundation’s article “America’s Pressing Challenge – Building a Stronger Foundation.”

In 2012, a comparison of 15-year-olds in 65 nations around the world found that average science scores among U.S. students ranked 31st, while average U.S. math scores ranked 23rd.

“The highest-scoring U.S. math students are nowhere near their peers in top-ranking countries,” Martin Carnoy, a professor of education at Stanford University, said in a Los Angeles Times article, “Are America’s students falling behind the world?”.

A lack of competitiveness in the fields of science and mathematics has serious long-term effects on the nation’s performance in the global marketplace.

“We are lagging behind the rest of the world, and we are lagging it in pretty substantial ways,” U.S. Secretary of Education Arne Duncan said. “It has huge implications. I think it is a real economic imperative we have to educate our way to a better economy.”

From the Apollo missions to the development of the polio vaccine, many of mankind’s most lauded achievements in the past century have been the result of a strong foundation in the math and science fields.

“Investments in science and technology have driven economic growth and improvements in the quality of life in America for the past 200 years,” Neil Lane, science adviser to President Clinton, testified before Congress in 2000. “Science has generated new knowledge and new industries, created new jobs, ensured economic and national security, reduced pollution and increased energy efficiency, provided better and safer transportation, improved medical care, and increased living standards for the American people.”

According to Leonie Tills, a student from Germany who studied on campus last year as part of a year-long exchange and homestay program, even high-achieving schools such as Lovejoy pale in comparison to schools in Germany and other European nations.

“Schools are way harder in Germany than in America,” Tills said. “Some things I learned in 11th grade in America I knew from 9th grade in Germany. We definitely have more homework in Germany, and our exams are not as frequent as in the United States but get longer as we get older.”

Curriculum and education in foreign nations in Europe and especially East Asia tend to be examination driven and heavily geared towards preparing students for rigorous final examinations. In Germany, according to Tills, exams begin in 5th grade with forty-five minute tests and progressively increase in complexity and length to as long as four hours in 11th grade and six hours in 12th grade.

Our problem is not merely the amount of time U.S. students and teachers spend on mathematics and science but what they do with the time they have.”

“We also do a lot of presentations and our oral marks and class participation count as more than two-thirds of our final grade,” Tills said.

While some American students find senior year to be the easiest year of high school and sometimes come down with the infamous “senioritis”, schools in Germany treat senior year differently.

“Senior year is the hardest here because the exams are not easy at all,” Tills said.

However, despite the fact that German students complete a more rigorous curriculum than their American counterparts, German students actually spend less time in class and sometimes are released from school as early as 1:30 in the afternoon.

“We rarely have any school spirit or cool events in school because we don’t spend as much time in school as they do in America, and there are not that many ‘fun’ classes,” Tills said.

American students log just as much time studying mathematics and science in their classrooms, but the nature of the instruction that they are receiving differs greatly from that of other countries. Additionally, students in Germany and Japan, on average, spend just as much time watching television as their American peers, and U.S. teachers assign more homework and spend more class time discussing it than teachers in Germany and Japan.

“Our problem is not merely the amount of time U.S. students and teachers spend on mathematics and science but what they do with the time they have,” former U.S. Secretary of Education Richard Riley said.

A heavy focus on math and science education in China begins as early as third grade, when specialist teachers in specific areas of study are employed to teach students rather than having a single elementary school teacher that teaches all subjects to students.

Even without the looming pressures of international competition, the study of math and science is crucial to achievement in a variety of professional fields.

“Analytical and quantitative skills are sought by a wide range of employers,” according to the Cardiff University School of Mathematics in Wales, United Kingdom. “Mathematics plays a vital, often unseen, role in many aspects of modern life, such as space travel, safeguarding credit card details on the Internet, modelling the spread of epidemics, predicting stock market prices, and business decision making.”

Mathematics plays a vital, often unseen, role in many aspects of modern life.”

Even when the concepts learned in math and science courses are not directly applied, students still use skills from those courses by applying them to real-life scenarios and problems facing them.

“As much as the mathematical and scientific knowledge help students, I think that it really is the critical thinking skills that are most important, because students learn to take concepts and apply them in a variety of ways,” AP Calculus AB and BC teacher Keith Christian said.

While many careers require some form of education beyond high school, courses on campus in the STEM fields provide students with an opportunity to become prepared for more advanced study in college and beyond.

While it typically takes at least four years of study beyond high school to gain entry-level employment into the STEM fields, high school courses provide students with the opportunity to prepare students for these challenging courses of study in college.

“In college, we’re seeing a lot more competition from foreign students, and also internal competition that we are the best and getting people ready to be the best,” Pre-AP and AP Chemistry teacher Jason Taylor said. “It is important that high school lays the foundation for science and math so that when students get to college they’re not struggling to succeed.”

Recently, the state of Texas changed the graduation requirements to where students on the Minimum High School Program need to complete only three credits of math (Algebra I, Geometry, and a third-year math such as Math Models or Advanced Quantitative Reasoning) and two credits of science (Biology and Integrated Physics and Chemistry). However, for the Recommended and Distinguished High School Programs, students must complete four credits of math (including Algebra I, Algebra II, Geometry, and a fourth-year math, such as Pre-Calculus, AQR, or Math Models) and four years of science, including Biology, Chemistry, Physics, and a fourth-year science, such as Anatomy and Physiology, Forensic Science, AP Environmental Science, or AP Physics.

However, some students on campus, such as senior Shawna Mattathil, have gone beyond the requirements for study in science and math by taking a several additional courses in the fields. In addition to the courses required by the school for graduation, Mattathil has completed almost all math and science courses offered on campus – AP Biology, AP Chemistry, AP Physics, AP Statistics, AP Calculus AB and BC, Anatomy and Physiology, and Health Science.

“Although the classes were a challenge, I decided to take them because I plan on being a biology major next year,” Mattathil said. “I knew that having early exposure to the material would be very helpful.”

Although math and science courses consistently rank among the hardest courses offered on campus, they also teach students skills that last longer than the knowledge of how to set up a Punnett square or solving differential equations will.

“Unlike traditional high school classes, my AP Biology course is very self-taught and resembles a college class in that much of the material must also be learned outside of class by reading the textbook,” Mattathil said.

While many students who study math and science fields are planning on going into a field such as engineering or medicine, study of math and science leads to a many opportunities in a variety of workplace environments. With a background in a STEM field, a student could find themselves working as a Financial Analyst, a Computer and Information Systems Manager, a Pharmacist, a Personal Financial Advisor, or even an Air Traffic Controller (the median annual pay was $122,530, and the only education required is a training course with the Federal Aviation Administration).

“As the U.S. economy is evolving over time, our jobs are increasingly engineering and science jobs,” Taylor said.

However, regardless of which specific profession that an individual chooses to go into, studies in science and mathematics provide a solid foundation that fosters critical thinking, problem solving, and the ability to analyze the world around them in order to develop innovative new technologies and solve the dilemmas and problems facing the world today.

“The great book of nature can be read only by those who know the language in which it was written,” the Italian physicist and astronomer Galileo once said. “That language is mathematics.”