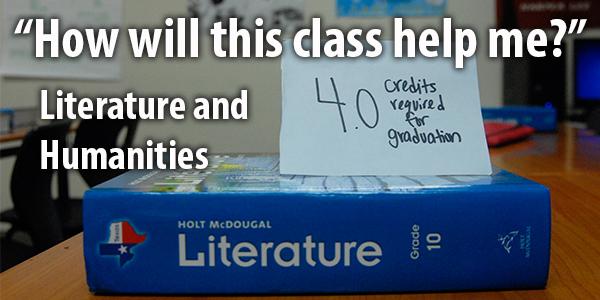 “And what exactly do you expect to do with that major?”

“How in the world will that help you get a job?”

With rising college costs and a more competitive job market, the study of the humanities is in decline, losing out to more technical, vocational-related fields of study. However, according to employers and educators, the study of the humanities and liberal arts is not only important, but vital, to personal and professional success in today’s increasingly interconnected and multicultural world.

“Undergraduates will tell you that they are under pressure – from their parents, from the burden of debt they will incur, from society at large – to choose majors that they believe will lead as directly as possible to good jobs,” Verlyn Klinkenbourg said in her New York Times column “The Decline and Fall of the English Major”. “There is a new and narrowing vocational emphasis in the way students and parents think about what to study in college. Too often, that means skipping the humanities.”

Klinkenbourg notes that, in 1991, 165 students graduated from Yale University with a B.A. in English Literature, and that by 2012, that number was 62. Additionally, while history and English were the two most popular majors at Yale in 1991, the most popular major at Yale in 2012 was economics.

A recent article by Fred Smith examining the distribution of degrees awarded to American college students in recent years praised the fact that college students were starting to avoid getting what he called “stupid” degrees, stating that graduates of non-vocationally oriented programs were at a disadvantage to those with degrees such as business, nursing, engineering and so forth. However, some proponents of a liberal arts-oriented education argue that a broad program of study can be more valuable to students in their professional future than a vocation-specific degree would.

“Flexibility, creativity, critical thinking, and strong communication skills – particularly writing – are at the core of a liberal arts education and are critical to success today and in the future,” Carol T. Christ, president of Southampton College in Massachusetts, said in a column for the American Council on Education. “It’s not surprising that a recent survey by the American Association of Colleges and Universities shows that more than three-quarters of employers would recommend an education with a liberal arts emphasis to a young person they know.”

Even for students planning on going into a field in business or STEM (Science, Technology, Engineering, and Mathematics), a liberal arts education and courses in fields such as history, philosophy, and English teach vital skills that prepare them for their intended careers.

“Just as mathematics is considered to be a good exercise for the brain even for those who will never use calculus in the future, so is the study of great books, history, languages, music, and many other non-science fields likely to hone a scientist’s skill to perceive and interpret the natural world,” Noble prize winning biochemist and professor Thomas R. Cech said.

One elective class on campus, humanities, provides students with an interdisciplinary foundation in the liberal arts, and adds to information taught in history, English, and fine arts classes.

“Humanities is a class where students study the life, literature, art, music, science, religion, and philosophy of the time,” Humanities and English III teacher Amy Olsen said. “Humanities covers approximately from 1400-2013. This year, we have studied the Italian Renaissance, painted a landscape, read A Midsummer’s Night Dream by Shakespeare, listened to and studied Baroque music, and discussed the philosophies of the 18th century, to name a few topics covered.”

To Olsen, the study of the humanities is an important part of a well-rounded education.

“We, as humans, are products of our times, so it is important to know about what life was like in the past because often our own life experiences are very similar,” Olsen said. “Literature, art, and music all express human emotion and passion.”

Reading literature is more than just entertainment to Olsen, it is educational, and teaches students lessons, values, and morals that no other subject can.

“I love teaching English and Humanities because I think that every student, if open and willing, can connect with an idea in a novel, an essay, a poem, a painting, or a symphony,” Olsen said.

One of the most widely read novels on campus is F. Scott Fitzgerald’s 1925 novel The Great Gatsby, which follows the lives of a group of characters living on Long Island during the summer of 1922, including the young and mysterious millionaire Jay Gatsby and his new neighbor, Nick Carraway, and Nick’s cousins, Daisy and Tom Buchanan. Despite the fact that Gatsby was published almost 90 years ago, its themes still connect to students and current events today, who read it here during Pre-AP English II.

“The Great Gatsby and other classics have themes that transcend time. That is why they connect with readers year after year,” English II and creative writing teacher Michele Riddle said. “For example, in The Great Gatsby, Nick [the protagonist and narrator] comments on 1920s society, saying that they were careless people that smashed up things and creatures and then retreated back into their money, letting other people clean up the mess they had made. This of course is true of the characters in the novel and the people in the time period, but we also see examples of this today with Justin Bieber and other celebrities’ arrests and inappropriate behavior. Bieber’s smug smile in his mugshot shows how confident he is that his money will get him out of any problem he may have, just like the characters in The Great Gatsby.”

Gatsby is among the top ten books taught in high school English classes across the nation, and has been read by millions of people around the world.

“[Gatsby] taught me that love is sometimes painful, and that it is best to cut your losses and not hold onto the past,” sophomore Heidi Zettl said.

In addition to teaching valuable lessons, reading can help develop skills that will help students on standardized tests such as the ACT and SAT.

Reading is one of the best ways to improve writing skills and develop a broader vocabulary.”

“It is important for everyone to be well-rounded and well-read,” Olsen said. “Reading is one of the best ways to improve writing skills and develop a broader vocabulary.”

Even novels not considered to be classics still can have an impact on a student.

“Novels by John Green are not considered classics, but these novels seem to connect with high school students in a way that few books published recently have,” Riddle said. “His books should be added to any ‘must read before graduating high school’ list.”

In addition to four years of English, the state of Texas requires students to complete further studies in the humanities by finishing two years of history, one year of world history and one year of U.S. History.

“Citizens are not born capable of ruling,” Thomas Jefferson once said. “They must be educated to rule wisely and fairly. They must be drawn out from the egotism of childhood and the privacy of their homes into the public world of democratic reasoning, deliberation, and consensus. This requires not only civility, but knowledge and skill.”

By studying history, students are taught essential skills for good citizenship , an understanding of both their own and other societies, and develop strong critical reading and analytical skills, according to a report by Calvert County Public Schools in Maryland.

“[AP World History] has taught me that everyone in the world is more similar than they are different,” Zettl said.

Recent statistics state why many proponents of liberal arts education caution against a strictly vocational education.

“One never knows where life will take them,” Olsen said. “Having a broad base of knowledge can lead to new opportunities and experiences.”

They Studied liberal arts and humanities in college (and made it):