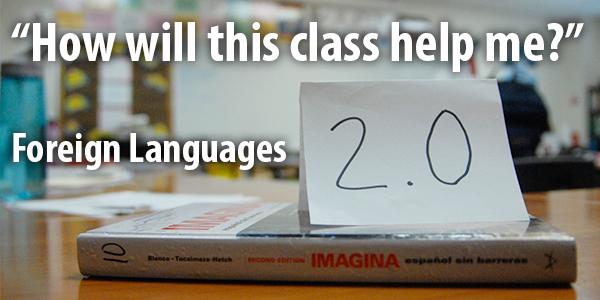 “This is America – I only need to speak English here. I shouldn’t have to learn some other country’s language.”

“What’s the point of studying a foreign language anyway when almost every other country is learning English as a Second Language?”

Compared to their foreign counterparts, American students are falling significantly behind, not in math or science, but in another critical area of academic success – foreign language. According to U.S. Secretary of Education Arne Duncan, only 18 percent of Americans report being capable of speaking a language other than English, while 53 percent of Europeans can converse proficiently in a second language. It does not appear that this deficit will change in the near future, as only 18.5 percent of students enrolled in public schools were receiving instruction in a foreign language.

However, students on campus and experts from around the world have differing beliefs than some of these policymakers, maintaining that, in today’s increasingly globalized world, knowledge of a foreign language is a huge asset in professional endeavors.

“Spanish is a language that essentially an entire hemisphere can understand,” senior and AP Spanish Literature student Caitlin Rice said. “It has given me the desire and ability to learn about other cultures directly from the citizens and native speakers.”

After graduating this spring, Rice will be attending Texas A&M University, where she will use her passion for foreign languages to study both Business Management and Spanish Language and Culture in the hope of operating a business that operates in multiple countries.

“I intend to keep studying Spanish so that I can become officially bilingual,” Rice said. “I hope to pursue a career where I can use my language skill often.”

Having an ample number of citizens who speak a foreign language, according to Duncan, is critical to national security, prosperity in the international business field, and the overall success of the nation.

“To prosper economically and to improve relations with other countries, Americans need to read, speak, and understand a foreign language,” Duncan said in a 2010 statement.

Spanish is a language that essentially an entire hemisphere can understand.”

“I will be studying Spanish in college, and most likely another language as well,” senior and AP Spanish Literature student Ryan Frome said. “Spanish will help me get a job because it is a benefit when employers see that you can speak Spanish.”

Spanish teacher Marilyne Gengoux pursued her passion in foreign languages by studying Applied Foreign Languages, a combination of English, Spanish, and Chinese applied to the field of International Business, while in college in her native country, France.

Gengoux’s studies in foreign languages opened up the opportunity for her to study abroad in the United States at Washburn University in Kansas, an experience that she enjoyed so much that she decided to ultimately return to the United States to earn a Bachelor’s degree in Spanish from Washburn and work as a teacher in the American school system.

According to the Institute of International Education, nine percent of American undergraduate students studied abroad in the course of their education, with nearly a quarter of those studying abroad in Spain and Latin America.

“I plan on continuing Spanish classes into college,” junior and AP Spanish Language student Colin Cross said. “I for sure want to do a semester abroad, whether it’s in Latin America or Spain. To be honest, I want to be able to claim fluency.”

In addition to the future benefits of speaking a second language in the workforce and for studying abroad, speaking foreign languages has already proven beneficial to students.

Speaking Spanish has already opened up a whole lot of doors, including the ability to travel to and volunteer in Costa Rica, which was a very important experience for me.”

“Speaking Spanish has already opened up a whole lot of doors, including the ability to travel to and volunteer in Costa Rica, which was a very important experience for me,” Cross said.

Frome, who is part Mexican, first became interested in studying Spanish to communicate with her Spanish-speaking family members.

“I took a month long trip to Mexico over the summer to visit family, and being able to speak Spanish helped me to communicate while there,” Frome said.

While speaking Spanish has been beneficial to students while abroad, one doesn’t need to drive very far to put their language skills into practice.

According to the latest census data, 22.4 percent of the Dallas-Fort Worth metroplex population are native Spanish speakers who speak primarily Spanish, and whose knowledge of the English language ranges from none whatsoever to being fluent.

Beyond practical uses, the ability to speak a foreign language can, according to studies, boost overall brain functioning and critical thinking skills.

However, for some students, the decision to study Spanish, or any foreign language, is not a decision based on practicality, rather, it comes from passion, motivation, and pure fascination with the idea of learning about a new language and culture.

“I’ve loved Spanish ever since elementary school when my mother befriended a Mexican woman who was fluent,” Rice said. “There was never any question about whether I would continue studying it.”

The world is no longer a confined place anymore.”

With international travel and business having increased in recent years, the number of American passport holders has reached an all-time-high with nearly 110 million people, approximately one-third of the population, own a passport and have traveled beyond U.S. borders.

“People are traveling more frequently, and people’s jobs are leading them to meet and work with people from different countries,” Gengoux said. “The world is no longer a confined place anymore.”