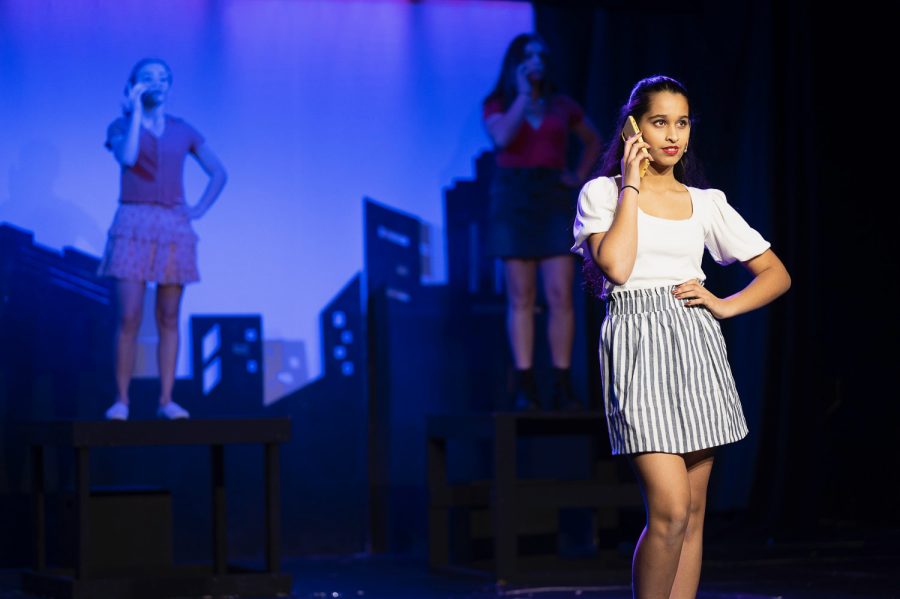 Freshman Kiah Pandley plays the role of Lucy in "13: The Musical." Pandley is also co-president of the WE Club.

Freshman Kiah Pandley is the co-president of WE Club and participates in productions at a local theater. Pandley established the club at the high school after she moved to Texas from California, where she also participated in the club.
At A Glance:
Favorite theater production: “Xanadu Jr”

Favorite thing to do when bored: Read

Involved in: WE Club and Mock Trial
Looking Deeper:
The Red Ledger: How long have you been involved in theater?

Kiah Pandley: I’ve had an interest in theater since fourth grade and have done various school productions when I lived in California. After I moved to Texas last summer, I started doing productions at North Texas Performing Arts (NTPA).

TRL: What productions have you been in?

KP: I’ve done a couple of shows here and there in California, but I really found my groove at NTPA. My favorite productions have been “13: The Musical” and “The Sound of Music,” which I am currently performing.

TRL: Why did you choose to start the WE Club at Lovejoy?

KP: WE is a service organization based in Canada and the club here is a chapter of that organization. I started a club at my old school in California, and it was a great way to give back to my community as well as help people all over the world. I wanted to start that at Lovejoy, too.

TRL: What are the goals of the WE Club?

KP: The club has five pillars: health, education, water, food and opportunity. We try to raise funds or awareness for these with projects throughout the year.

TRL: What are your roles in WE Club?

KP: I mainly initiate brainstorms for project ideas and keep us connected with the organization in Canada.

TRL: What types of service projects has the club done?

KP: In October, we had a sock drive to give socks to people in need of them in the winter. We ended up with about 400 pairs for donation. We also recorded video skits for local teachers to show their students. The project we are working on right now is called WE Walk For Water.

TRL: How have you gained lessons in leadership through WE Club and theater?

KP: I’ve learned that organization is key to good leadership. If you know what you want to accomplish out of every rehearsal or club meeting before you walk in the door, and how you are going to accomplish it, it is a much more productive session.

TRL: How would you say participating in the club and theater are similar?

KP: They are similar in that they both require lots of focus and cooperation from everyone involved. If that happens, projects and musicals are both very successful.

TRL: What successes have you gained from the club and theater?

KP: At NTPA, I was nominated for best singer, newcomer and actress in a dramatic musical and was recognized as best newcomer. As for the WE Club, my club in California was one of two in the state that got the WE Get Doing award.