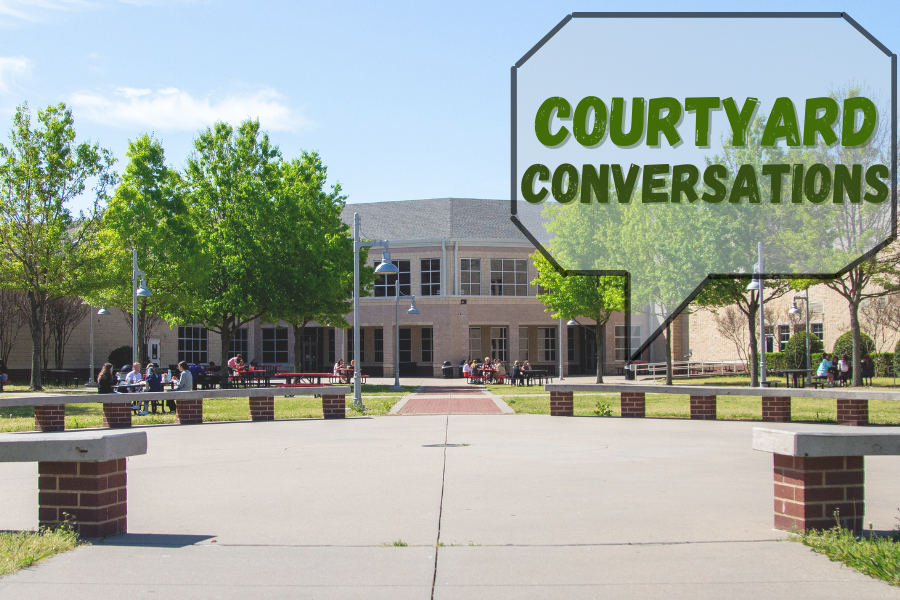 Editor’s note: Courtyard Conversations is a monthly series, which features the school’s staff members, and a topic that is relevant to their lives or work at the school. TRL staff members speak with each month’s subject in the courtyard. For the first edition, TRL editors Lindsey Hughes and Parker Post kicked off the series by interviewing principal Chris Mayfield.

Among the counselors at the school, there is a familiar face. Natalie Coonrod taught for 18 years before becoming a counselor, with this being her sixth year in the district. This is her first year as a counselor for the school.

“Counseling is definitely more on a more intimate level, more one-on-one, working with families, individual students sometimes working with small groups of students,” Coonrod said. “As far as teaching goes, when I would stand at my door and I’d see a student coming up to me, I could tell what kind of mood they were in but there’s nothing I could really do other than just smile and try to help them get through that class period. Whereas on this side, I’m able to go a lot deeper and learn what’s causing that struggle of being able to be in that classroom or that hesitation of wanting to be at home or you know, whatever that situation is.”

Coonrod began her career in special education, teaching math and science classes at Wylie. After a few years of teaching at a high school level, she moved on to Argyle Middle School.

Coonrod began teaching science at Willow Springs in 2016. In 2018, however, her student Parker Pritz committed suicide.

“It was late on a Saturday night that the phone call came through,” Coonrod said. “Another teacher at Willow Springs and I went on Sunday and actually saw him in the hospital and visited with the family, so that was truly impactful. You don’t forget that.”

After Pritz’s death, Coonrod sought out counseling programs and ended up going through the Texas A&M-Commerce, a research university.

“It was a pretty intense program” Coonrod said. “It’s a 60-hour required program. It also requires 100 hours of practicum hours and 300 hours of internship, which I luckily was able to do through the district. I did my practicum at Willow Springs and my internship working with students at Lovejoy High School.”

After completing her internship, Coonrod became a counselor at the high school this year.

“There are things as teachers, sometimes we get caught up in teaching our content and you forget to see each individual student as a person,” Coonrod said. “I think that’s what Parker’s suicide did for me is it really helped open my eyes to each individual, though I wish I had seen I mean I think I did that from the get-go but I think that is what I turned into even more so because of it. It wasn’t a class of 30 anymore. It was 30 individuals that have 30 different needs that walk in with different home lives and different situations.”

Coonrod will be continuing her contract into the next school year.

“I think going in, I probably approached as I could do everything and I’ve learned that I have to delegate, I have to give myself a little bit of grace,” Coonrod said. “I can’t do all things, but I can do some things. I think that we’ll have a really good team to start back as a counseling team; that’s going to be a huge difference-maker as well. But if there’s anything I can move forward learning from, it’s just taking experiences I’ve had this year, implementing my relationship with families and building more trust with staff. I think that’s a big, big component as well. Those are things I’ll take from it for sure, but I think my love of kids isn’t gonna change.”