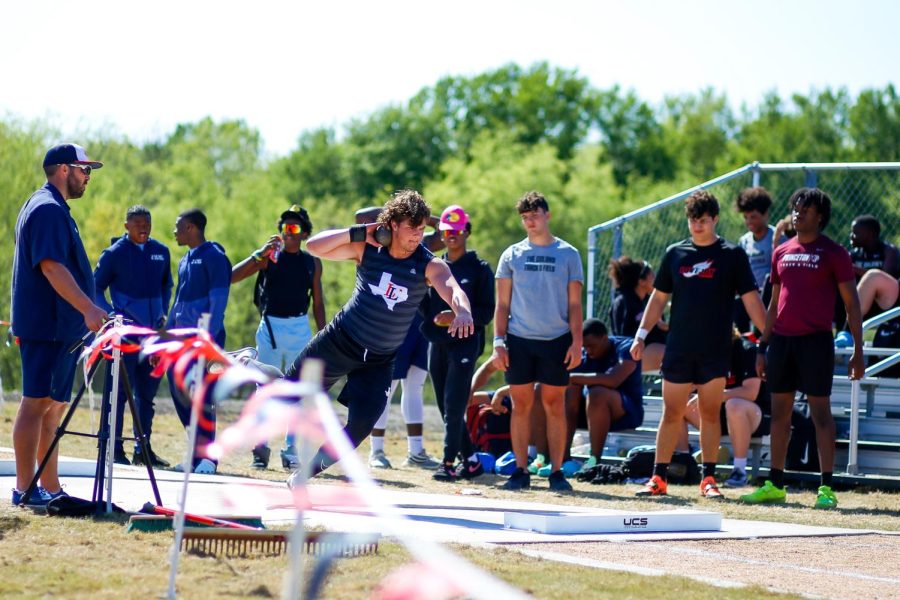 The track team hosted the district meet this past Wednesday and Thursday and advanced a total of 38 positions to compete at the area meet.

“The determination and grit were so visible and great to see,” head girls coach Carly Littlefield said. “Almost every athlete took care of business and performed to the best of their abilities. So many of them had personal bests and outstanding performances.”

Juniors Leila Ngapout, Chloe Schaeffer, Amy Morefield along with freshman Mia Reaugh competed in the 4×400 meter relay and placed second with a time of 3:53.46. Reaugh, Ngapout, and sophomores Isa Camacho and Lauren Dolberry placed third in the girls 4×200 relay, running a time of 1:43.23.

“Getting out of districts is a big step in going far in track since it helps give the team and I confidence moving forward in those events,” Ngapout said. “We performed really well as a team in our 4×200 and 4×400 relays, and we hope for the same performance at area.”

The girls team swept the 800 meter and mile races. In the 800 meter, sophomore Kailey Littlefield placed first running a 2:19, Morefield finished second in 2:19.38 and senior Katie Armstrong came in third with a time of 2:20.51. In the mile, Littlefield came in first with 5:07.09, sophomore Sara Morefield placed second in 5:09.19 and Armstrong finished in third with a time of 5:16.87.

“We had so many athletes perform their best and PR both on the track and in the field,” Carly said. “It was awesome to see the grit and determination of these athletes.”

“The highlight of the field events was Jelai Jonhson having an awesome day and throwing a huge PR to win the Varsity District Shot Put,” Carly said. “We had so many athletes pull off an amazing performance in the field, both on the girls and boys side.”

“We’ve had ups and downs throughout this season, but everyone was able to pull off a fantastic performance,” junior sprinter Jaxson Lavender said. “We all know that no track meet has ever been perfect, so through all the trials and mishaps we’ve been able to learn to overcome and be successful.”

“The success at the district meet means we have potential, and it means as long as we execute and do what we can do, we can be successful,” Lavender said. “We’re now focusing on doing whatever it takes to help us advance onto regionals.”

“Districts is a nerve-racking meet, but I’m grateful and excited that we had so many events advance,” Ngapout said. “We know that area will be more challenging, but we’re thrilled to have the opportunity to compete at area.”

The team will set their sights on the area meet on Thursday. After that, the regional meet will follow April 29 and then state on May 13.

“We have been solid all season and we just turned it up a notch for district,” Carly said. “A lot of hard work and sacrifice. When you’ve put in so much time and effort, we want to make it worth it when it counts in our future championship meets.”