Teacher donates stem cells to save a life 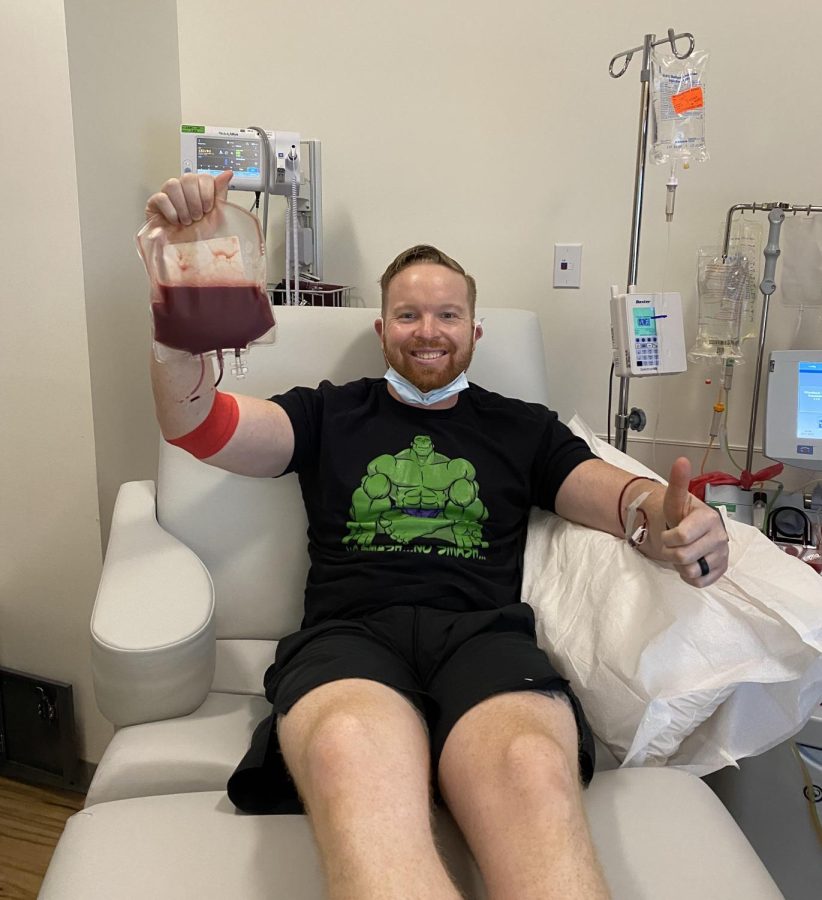 Teacher Jared Glaze had his cheek swabbed for the Be the Match organization 10 years ago. He left on Feb. 27 to donate his stem cells after receiving a call that the organization found a match.

His room is filled with the forest green of the Incredible Hulk. He zooms through the hallways on a scooter again repping the purple and green of his favorite Marvel character traveling to and from his classes. During the scary season of Halloween, Jared Glaze is the one to dress in a blown-up T-Rex costume. For three school days, Glaze was out of the classroom and in Seattle. His blood streamed out of needles lodged in his arm, collecting his stem cells.

Glaze left on Feb. 27 and returned to school on Thursday, March 3. After Glaze swabbed his cheek for the Be the Match organization and placed into their database 10 years ago, he received a call that they had a match.

“I always recommend donating blood but to actually help somebody with a blood cancer and possibly cure or extend their life,” Glaze said. “I would think about, what if I was in that scenario, and what if I didn’t have a match because somebody didn’t feel like doing that? I’m not saying everybody has to. If you don’t like needles, I wouldn’t recommend doing it. It’d be pretty tough to be hooked up to a needle for seven hours if you didn’t like needles, but anything I can do to basically help out where I can.”

There are two ways to donate to help cure blood cancer: giving bone marrow, where they drill into the hip or giving stem cells. Before they take the stem cells, they give donors shots for five days to boost the cells in the blood. They take the blood out with an IV then put it through a machine and back into the body.

“I was on that IV by the machine for about seven hours,” Glaze said. “That was the tough part: keeping your arms straight and laying in a position for seven hours doing that.”

Before Glaze could donate his stem cells, he underwent a series of routine blood work at Urgent Care. They took about 10 vials of his blood.

“They’re going through all the markers,” Glaze said. “I think they’re making sure. Because in order to give something like that to another person, they have to make sure the other person’s body is not going to fight it anyway.”

Glaze doesn’t know much about the patient that will receive his stem cells other than she’s a 43-year-old woman with Non-Hodgkin’s Lymphoma. In six months, Glaze will know if the stem cell transfusion worked or not. Then after a year, she has the option to contact Glaze.

“I really pray it does take because just knowing that you could have helped somebody,” Glaze said. “I think a 43-year-old woman, maybe she’s a mom if I could extend her life or even help curate and stuff. The fact that that gives her another option instead of the way she was going. That’s the best part, and that’s what I hoped for all the time. Because you can be possible matches again in the future, I would do it again in a heartbeat.”

When Glaze walked into the room on Tuesday where he would spend the next seven hours, his name was displayed on a TV at the Be the Match Seattle Collection Center in the downtown area. Glaze’s trip was fully paid for by the organization.

“I was tired but my body actually recovered fairly quickly,” Glaze said. “If you’re thinking about donating and stuff, it’s not like you’re going to be in a bed for days on end. I mean, you could be, but I think it’s a rare case. You’re good to go. They kept me that night. The next morning was to make sure everything’s good. So they didn’t want you to donate and fly instantly after that.”

Glaze has O negative blood, which is the universal donor. Whenever the school has a blood drive, Glaze takes time to donate.

“I started in high school whenever you had those blood drives because it starts off as, ‘Cool, I can get out of class,’ which is a good reason if you’re gonna get out of the classroom.” Glaze said. “Somebody needs that blood. Then I found out I was O negative, so they frequently contact me. I can give it to anybody, and then I figured why not? I know I can keep making blood, and I keep giving it. I’m not going to run out. ”

Teacher Andrew Stallings is a blood cancer survivor after he was diagnosed 17 years ago with multiple myeloma found in his bone marrow, causing him to become anemic. He is alive from stem cell transplants, not from a donor since he didn’t have a match, but from his own stem cells.

“I have so much respect for Jared Glaze for what he did and what he continues to do,” Stallings said. “Not only does he donate stem cells, he donates blood, and he’s an all-around giving guy who cares about people. It speaks to the kind of person that he is. If there’s a way for anybody to reach out and thank him, they should do it, because they never know when Jared Glaze might not just save them academically, but save them physically.”

Glaze teaches chemistry and in the Center for Academic Training (CAT).

“It was good to be back,” Glaze said. “A lot of students asked me about it, so I think that’s good. If you like donating blood whenever you turn 18, you can do Be The Match and be a possible match for somebody who needs help with cancer and stuff. Just getting that awareness out.”

Alyssa Alonzo is a student in Glaze’s chemistry class who heard about his experience after he returned to the classroom.

“I am personally not a big needle-type person, but I would do it [donate blood] every so often because it makes me feel good about myself knowing I did it to help others in need,” Alonzo said. “Mr. Glaze is truly an awesome person for donating stem cells to help another person in need, and I hope he can inspire others to do the same.”