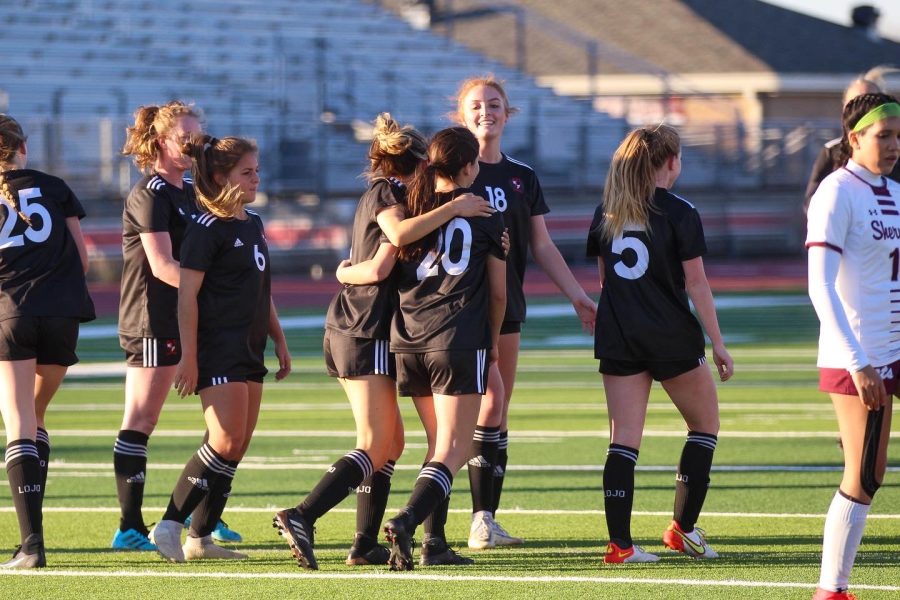 Senior forward no. 8 Maya Hignite hugs freshman forward no. 20 Emma Nelson in celebration of Nelson's goal. The team beat their overall record this season and will start playoff play this week.

The girls soccer team hit a milestone Friday against Rock Hill as they passed their all-time record for most wins in a season since 2011. Their total record on the season is 18-2-1.

“We went crazy when the whistle blew,” junior forward and midfielder Paige Young said. “We all were so proud of each other and how we defied the odds to reach this milestone because all of us have been through so much together to get to this point.”

“Winning 18 games was never our goal to start the season, but it is a result of all the hard work the girls have put in since we started working together four years ago,” head coach Ian Keeble said. “Winning 18 games is great, but we really want to win our next one, our first round playoff game later this week.”

Not only did the victory secure the school record in wins, it was also a noteworthy win against a previously undefeated Rock Hill team that went into the game 19-0-1.

“It felt so amazing to beat Rock Hill,” Young said. “After we played them the first time, we all wanted to redeem ourselves. We maintained possession in the offensive half most of the game and were able to finish our chances. Our defense rocked it out there, and I’m so proud of how composed we stayed under the pressure that was building when Rock Hill got frustrated.”

Juniors Young and Emmy Wood were the two scorers in the game.

“We played really well against Rock Hill,” Keeble said. “We took care of the ball in the back and in midfield that led to our attackers having more freedom to be creative and combine. We were also outstanding in transition. Breaking the program record for wins in a season and beating an undefeated Rock Hill team were just other things that made the night special.”

“It was a really bittersweet feeling when we all realized it was their last home game,” Young said. “It was the best home game to finish on because we were so proud of ourselves, but everyone got really emotional when reality set in that it was their last time on our home field.”

The team will find out soon who their first round opponent will be in the playoffs, and will lean on their team chemistry to get deep into the postseason.

“A lot of the success we’ve had this season is not only how we play on the field, but also how we all act with each other off the field,” Wood said. “The whole team is so close with each other that we know we can all work together and play together. We connect so well on the field because of the trust we have in each other and the belief we have in everyone. We know what we are capable of as a team and everything we can do, which will allow us to put in the work and everything we have into the playoffs.”