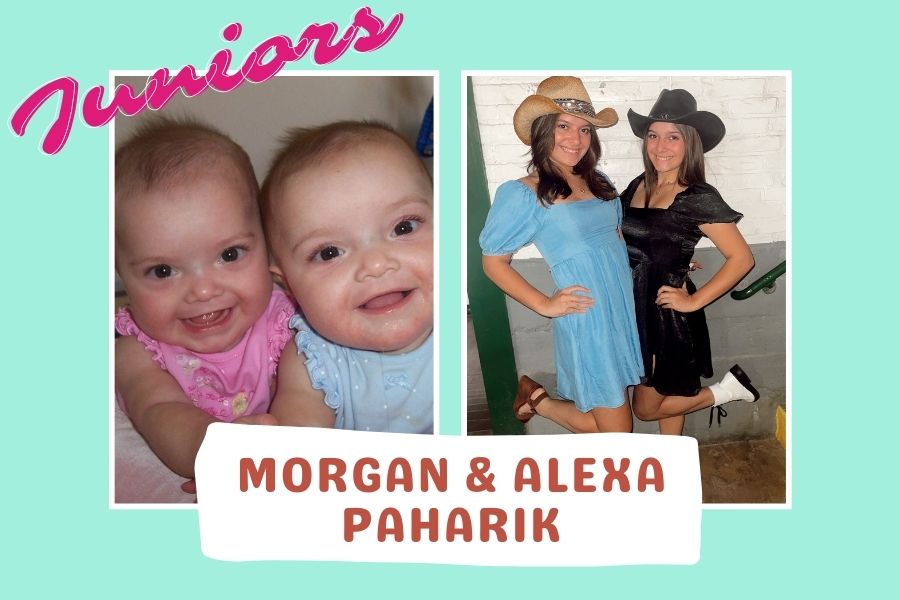 Juniors Morgan and Alexa Paharik play soccer together. "Probably that it's like a built-in Best Friend, I [Alexa] know some people get really sick of each other, but we share everything and I don't know. It's really fun. "

At a Glance:
Favorite thing to do together: Playing soccer, hanging out with friends

Favorite movie to watch together: Instant Family
Looking Deeper:
The Red Ledger: What’s your favorite part of having a twin?

Alexa Paharik: Probably that it’s like a built-in Best Friend, I know some people get really sick of each other, but we share everything and I don’t know. It’s really fun. It’s like having your best friend always over like just having to sleep over.

Morgan Paharik: If you’re meeting new people, you always have somebody like right there. It’s like a partner in crime. But I also like the idea that we can trick people and switch classes and stuff.

TRL: How has your relationship with your twin changed over the course of your high school years?

Alexa: Up until 8th grade we dressed alike, and then we moved from Tennessee to Texas and then started dressing differently. And also, I think high school actually made us closer, because there’s so many different challenges and different things you go through in high school. We’re always there through everything.

Morgan: We have more of the same friend group now, so we always are together. I feel like we’ve established more individuality. We dress differently now. She’s her person, I’m mine.

TRL: How do you think your relationship will change when you go to college/after high school?

Alexa:  I think we will end up at the same college. But I think that we’re actually going to change. We’re gonna have different things. College is a lot bigger, so I think we’re going to make some different friends. She’s gonna have her thing. I’m gonna have my thing. I think definitely branch off a little bit, our relationship wise, but we won’t be closer like, literally close. I feel we depend on each other.

TRL: What’s the most frustrating thing about having a twin?

Alexa: Sometimes some of my friends even mistake us. They’ll be like, ‘Oh, you guys are? Well, they can just share this and they can share that’ and they kind of treat it as a package, but we’re both individuals. So I guess that’s being referred to as the twins versus like a person.

Morgan: Even with soccer teams, we’re put on the same team because it’s like, we’re a package deal. Or, it’s just certain things were grouped together versus our own. If it’s like she did something wrong, even if I really didn’t do anything wrong, but what she does affects me.