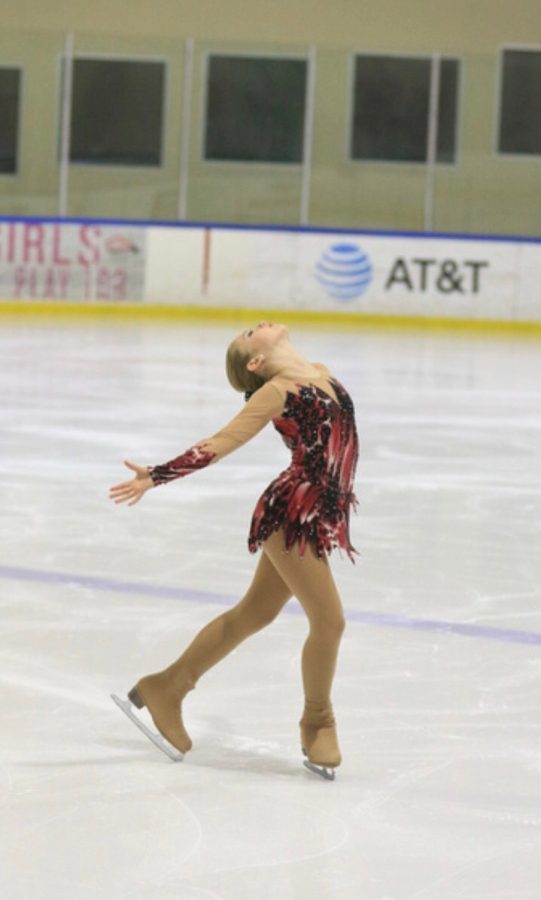 Freshman Olivia Lee is a competitive figure skater. Lee is involved in other extracurriculars including orchestra, varsity robotics, Chinese and HOSA.

Freshman Olivia Lee is a competitive figure skater. Lee is involved in other extracurriculars including orchestra, varsity robotics, Chinese, and HOSA.
At a glance:
Years of experience: Seven

Favorite song: “Speaking of Happiness” by Gloria Lynne
Looking Deeper:
The Red Ledger: How did you start figure skating?

Olivia Lee: My dad and I had been going to open skate every Saturday for two years. Then my cousin visited from Hungary, and she was like, ‘why don’t you just do it as a sport?’ I was really confused because I didn’t know it was a thing, and I’ve been doing it ever since then.

TRL: What is your training schedule?

OL: In the morning, I’ll probably wake up around 4:45 a.m. and leave my house by 5:30 a.m., so I can get to the rink at 5:45 a.m. We usually do an off-ice warm-up, like running and stuff beforehand, until around six, and then we get on the ice at 6 a.m. I skate until eight, and I’ll have a lesson three times a week, 30 minutes long. Other than that, it’s more just going through things like falling and getting up. Saturdays have the same schedule, but then they offer classes and conditioning. During summer, it’s like you spend six hours a day during each day.

TRL: What are your goals for the future in skating?

OL: I want to go into coaching, and I want to make it to sectionals, maybe nationals regarding my personal skating. I’m currently competing in singles, but later on, I think I want to transition into ice dance.

TRL: Are you on a skate team?

OL: It’s sort of an individual sport, so there’s not really a team itself. There’s definitely a community that skating is part of. I have two coaches and then all the people that train with me and around me all have that team bond.

TRL: What is your favorite part of skating?

OL: It’s either the community or learning new things. You’re never going to be perfect at something and there’s always something you have to fix or work on.

TRL: How often do you compete and what are the competitions?

OL: It’s actually less often than you’d think. In my rink, we normally only go to 4 competitions a year. There’s usually one in April, June, August and October. They’re sort of sporadically placed out, but we spend months and months preparing for them.

TRL: What are your thoughts on the 2022 Olympic figure skaters?

OL: The men’s team was definitely strong in the US. I’m glad that Nathan Chen finally got his medal, and it was interesting to see how much of a higher level the men’s team are compared to the women. I think the women’s team isn’t necessarily weaker, but I don’t think that they’re going to be as successful as the men’s were because of the higher competitions in Russia. I was happy with the ice dance results, even though it’s harder to tell the difference in levels because there are no jumps.

OL: It definitely takes dedication. I know most people want to quit at one point.

Those who quit don’t ever really get back into it. It’s only those who stay with it that continue to grow, and then eventually reach success or a higher level.