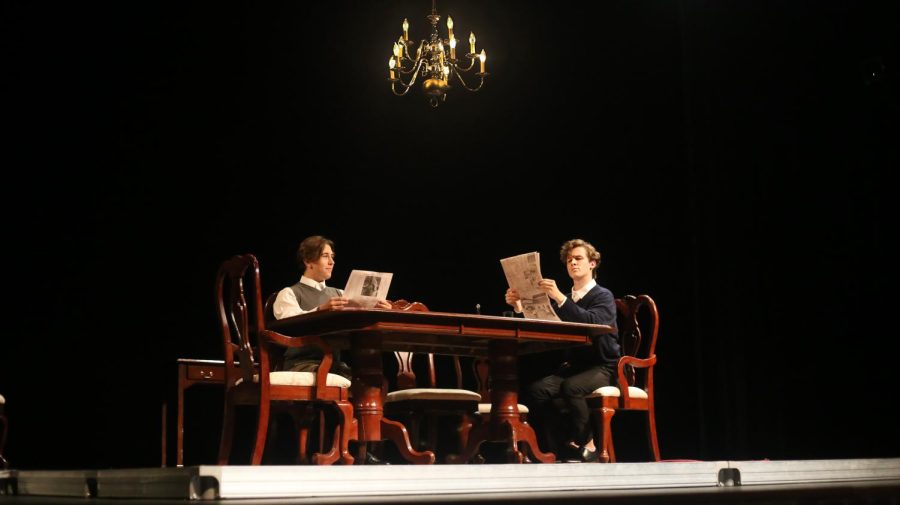 Jacob Smithwick and senior Peyton Nicholson rehearse for the Dining Room show later this week. Theatre will have shows on Nov. 11 and 12.

On Nov. 11 and 12, theater will perform the show “The Dining Room” in the high school auditorium. The play is set around various dining rooms, each in a different time period.

“[The show] is basically about the dining room and how different people think about it,” sophomore Zoe Smithey said. “Your mother might think that your dining room is the best place in the house and she loves eating dinner there, while a teen daughter might think that it’s kind of boring and she would rather be doing something else.”

The production cast began preparing the first week of October. The cast meets before or after school most days during the week. During this time, the cast members work with their partners to self-direct and interpret each scene.

“For this particular show, each person has two to five scenes,” Smithey said. ”You get peer reviewed, and then the teacher will look at it. It is very self-driven.

“We got casted for the parts, but we kind of got to direct ourselves, which is nice,” said Smithey.

Each performer in the play has two to five costume changes throughout the show with 3 minutes to change between scenes. Head theater tech Mia Chase works backstage with her team on lighting, costumes, props and set design.

“It all starts with finding out the mood, color palette, setting and time period of the scene,” Chase said. “Then we design and create the costumes. Then we develop changes based on how much time off stage the actor has.”

Sophia Konecny portrays the part of Helen in the scene called “Young Drinkers” and Clare in the scene “Club Embarrassment.”

“I auditioned with just my director during my acting class and then for callbacks,” Konecny said. “I went to school early and did certain scenes with certain people. Then [Brewster] chose the people who worked best for the roles.”

The actors worked with their director and peers to advise them on their scenes. The students each play multiple roles in the production.

“We did work with the people in our scenes on blocking and character choices, which was pretty fun, but we also had a lot of help from our director, [Brewster] on blocking and more of the smaller more detailed parts,” Konecny said.

Tickets for the show are available for a limited time on the Lovejoy website.

“It takes teamwork, responsibility and dedication to create a show,” Chase said.