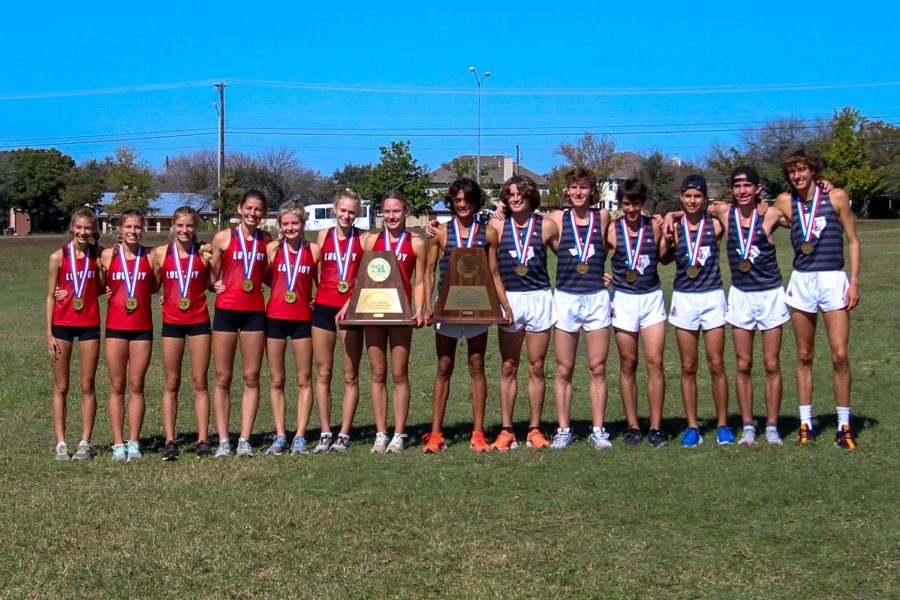 The boys and girls varsity cross country teams stand together holding their trophies. Both teams were able to fight their way onto the podium.

The cross country team competed at the state meet in Round Rock on Friday, Nov. 5. The girls team left with a state champion title and the boys left the meet third in the state.

“Winning state is a huge accomplishment,” head girls coach Carly Littlefield said. “This journey started several years back with alumni girls who showed the current team what hard work and hard training looks like, and this team bought into that and came together for a perfect season.”

“We all fought so hard for our teammates because we all desired to win,” Amy said. “We all raced our hearts out and it was an amazing experience. We fought so hard to win as a team and it took everyone and everyone did their job.”

“A podium at state was the main goal even from the beginning of the summer,” Barr said. “It’s a great accomplishment to get back on that podium after a few off performances in past years.”

The team had an undefeated road to the state championship meet as both the boys and girls teams swept the district and regionals meet.

“The Regional meet is always exciting because everyone is racing for the top spots to qualify for State,” Carly said. “Our Leopards do a phenomenal job of handling the stress and pressure and executing the game plan.”

Throughout the season, the team focused on not only training physically but also mentally.

“Our main improvement was not only physically getting faster but getting mentally stronger and having the will to fight through the pain in the middle of the race,” Amy said.

Both teams have many talented underclassmen.The boys team sent one freshman and

“The future of our team is looking as strong as ever,” Barr said. “We have really strong sophomores and freshmen so I would continue to expect podium performances at state. It’s going to be great to come back to watch as they continue to get even faster.”

Looking towards next year the team has many returning runners, and they hope to perform to the same standards next season.

“The work [the team] puts in to achieve all they have this year is above and beyond what most are willing to do,” Carly said. “But even more importantly, they are great women of character and strength. That’s what makes me the most proud.”