Coach has been at the school since it opened 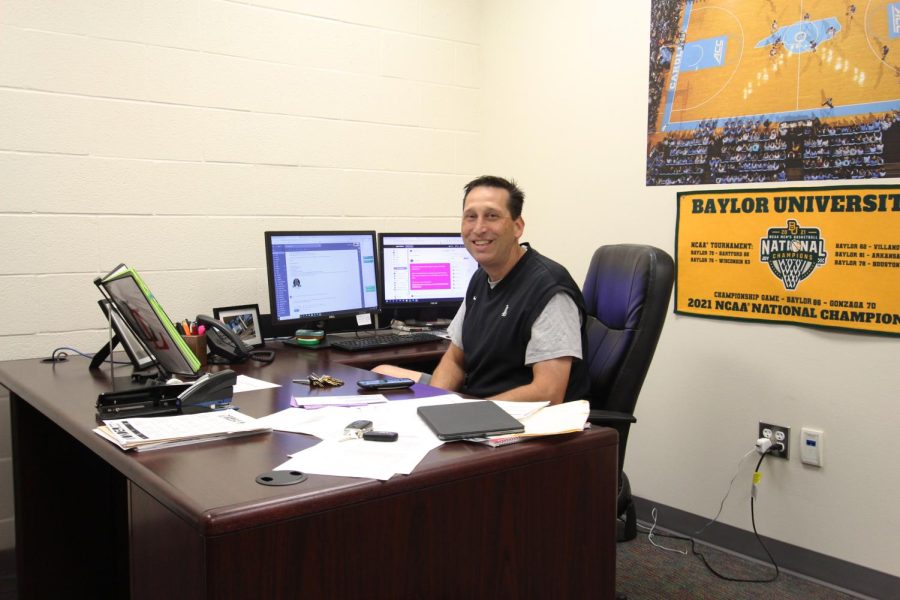 Athletic director, head boys basketball coach, and PALS adviser Kyle Herrema has been in the district for 15 years. Herrema has taught nine different subjects over his time at the high school.

The crowd is antsy on their feet, waiting for this breakdown of the game to begin. Now, let’s start out with introducing one of the coaches and teachers that have been at this establishment since day one in 2006 when they were working in D hall, only one of the now filled four hallways. This OG, Kyle Herrema has been in the teaching game for more than 15 years.

“I got an email,” Herrema said. “Lovejoy was trying to recruit people when it was opening up. They sent emails to different school districts to teachers. I applied for a job at this school. I had no idea where Fairview or Lucas was, and I got the job.”

“We try to get to know the kids outside of just the sport, but really for me the thing that’s the coolest is to see the kids outside as adults,” Herrema said. “You know, I’ve been to nearly every wedding for every kid that’s ever graduated from here and got married. That’s super to know that you had just a little bit of part in them growing up to be a young man of character because every one of them I’m super proud of what they’ve become.”

Not only did this coach and teacher play multiple different sports, Herrema has taught an array of subjects since he came to the leopard stadium, including geography, world history, US history, psychology, sociology, PALS, health and senior project.

The teaching game almost didn’t have Herrema as a player. Herrema’s initial major at Baylor University was pre law. He planned to be an attorney; however, while Herrema was working with the basketball team at one of their camps during the summer, one of the coaches gave him a suggestion.

“One of the coaches said, ‘What are you going into?’” Herrema said. “I said, ‘I’d like to be an attorney.’ They said, ‘Why don’t you get into coaching?’ I was like, ‘Okay, that sounds great.’ I got into coaching. I changed my major.”

In 1996, Herrema graduated from Baylor University and began his teaching game at Byrd Middle School in Duncanville where he coached football, basketball and track. Then he taught in Colorado for two years, and Coppell High School as a basketball and cross country coach for seven years.

“I love the kids the most to me,” Herrema said. “That’s the best part of my job coaching wise. I love taking a group of kids that are different and building them into a team. I feel like I want to try to help coach people and find the weakness of another team and try to exploit that and try to go for a win.”

Let’s take a look at his fellow OG, Theresa Dollinger. She’s a biology and anatomy and physiology teacher who works with Herrema.

“He’s always high fiving people or giving fist bumps,” Dollinger said. “He always recognizes you. If you’re walking down the hallway, he makes the point to say, ‘Hello.’ He makes a point to ask about my kids [and] my husband. You always feel like you’re recognized around him.”

One of Herrema’s varsity basketball players, Pete Peabody, has been with him for almost four years.

“The energy he brings to everything he does,” Peabody said. “There’s never a bad day with Coach Herrema. Even if you personally are having a bad day, you will always come back the next day looking forward to a good day. He’s always an encourager.”

It’s time to thank the crowd for listening as this breakdown is over, but for the future of this OG, Herrema plans to continue where he’s at.

“The people I work with are some of my best friends,” Herrema said. “You just work with quality people everyday. Maybe you had some opportunity to go some other place, but this is where my home is. I bleed red and black.”