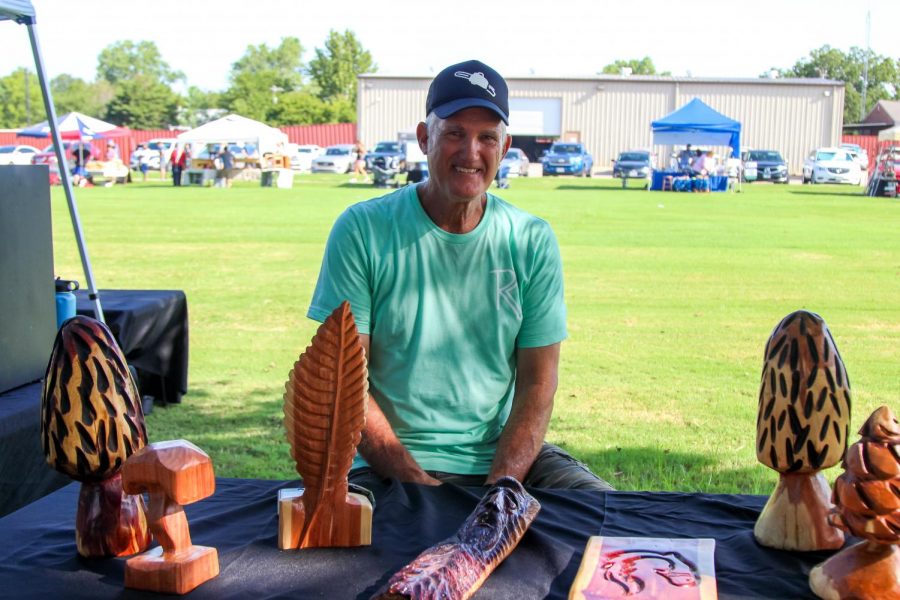 The chainsaw chops the Eastern Red Cedar tree down. Rick Reeves asks his contractor if he can have the trees. Rick returns to his work bench, clamps the wood into place and breaks out his chainsaw to whittle it down enough for his round grinder to shape out his next sculpture.

After Rick learned how to play the Banjo from YouTube, he found YouTubers Ryan Cook and Jordy Johnson carving wood, leading him to his hobby of woodworking.

“I am hooked on carving,” Rick said.

Rick uses a grinder, a shaken disc, a dremel, his chainsaw and a sander on Eastern Red Cedar trees and Mesquite trees to form his sculptures. His projects take from two to 20 hours as he’s learning.

“I’m having fun making everything,” Rick said. “All of a sudden, I’ll think about something I go, ‘Oh, I’d like to do that.’”

“It’s like Christmas all over,” Rick said. “You wake up, and you want to carve something again or do something different.”

He picks up his carved leaf, gesturing how he cut the log in half. Starting with an outline of the stem, Rick shaved down the wood until the shape of the stem came into view. Then, he moved on to the leaves creating each groove till both of the halves of wood were done.

“It’s relaxing,” Rick said. “It’s nice to have a block of wood and make something out of it, whether it’s another tree out of a tree or carving a face. Usually when I start a tree, I’ll look at it and go, ‘I think I can carve something out of that.’”

Rick retires from his landscape maintenance job at the end of this year. He plans to spend more of his time carving wood.

“That’s my trouble,” Rick said. “I see something I’ve always wanted to do as a kid and never did do it like the banjo. The thing is life goes by so quickly you just might as well start to learn how to do it because you’re not going to live forever. I always want to do something, might as well try it, so I’m going to be carving till I kick over. That’s my plan as long as I can still hold a chainsaw.”