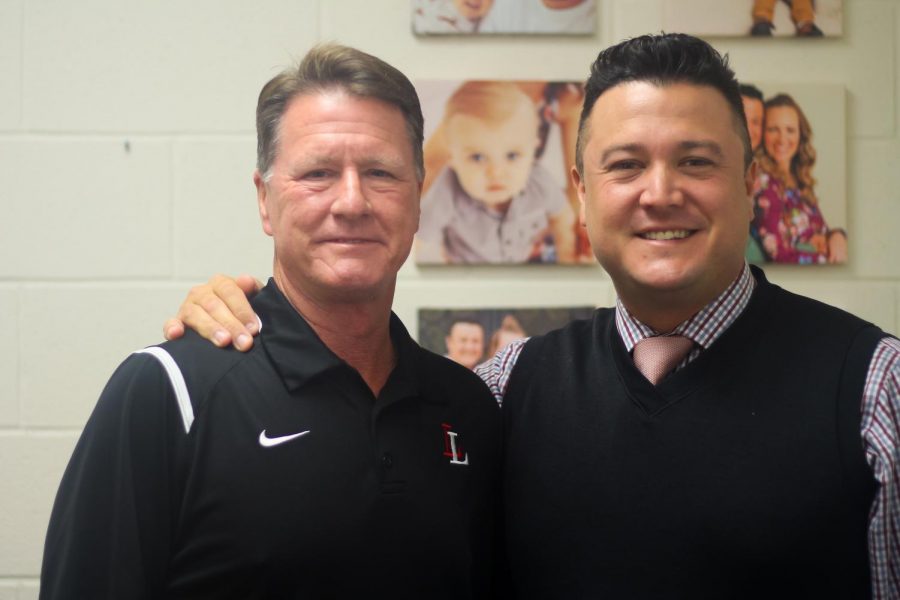 The players’ helmets and pads move up and down on the forest green field; students fill the rows of desks, learning the next time period in world history. For about nine years, Austin Coachman was “coach Coachman,” the world history teacher and coach whether it was football, soccer or baseball. However, when his father, Bruce Coachman, retired from assistant principal in May, Austin saw his opportunity to step up as the new “Mr. Coachman.”

“I knew that I wanted to be assistant principal at Lovejoy High School since I left here in 2019, and that was something that my wife and I set a goal [for],” Austin said. “This has always felt like home.”

“We’re super sad to see Mr. Coachman, the original, the OG [go],” fellow coach and mentor Kyle Herrema said. “He was a good friend of mine. The way he communicated with people, people had clear expectations of what was needed. I think Austin learned from his dad on how to treat kids and how to get things done. He saw the work ethic that his dad had daily, so I think that carried over to Austin’s life.”

After Austin applied and interviewed, principal Chris Mayfield made the call. Austin said “yes” before Mayfield popped the question if he wanted the job.

“It was nice to see that he has worked,” Bruce said.  “All that he has done, he has worked for, and he has earned, it doesn’t have anything to do with me. It’s his work capacity and his ability to do the job. It was nice, and I told him ‘congratulations.’ I was happy. I’m always proud of him.”

Along with Bruce, Austin’s two aunts, his uncle, his grandma and his brother also work in education.

“Well, to say it runs in the family would be an understatement,” Austin said. “Education is in our blood.”

Austin wanted to work in public service, but initially in high school, Austin didn’t see himself as a teacher, let alone an assistant principal. He wanted to be a firefighter but ended up going to Austin College where he “fell in love” with the classroom.

“I think it’s in his DNA to be an assistant principal,” Herrema said. “He’s got the perfect demeanor for where he’s so kid-centered. He loves kids, at the same token, he’s my type of guy where he’s a worker. When you need things to get done, he’s the type of guy that you can always rely on.”

As Austin spends more time in the assistant principal position, he hears about the impact his dad left on the teachers and students.

“It’s incredible to hear because you grow up and you have this image of what your mom and your dad are,” Austin said. “Then, you grow up into an adult, and your dad’s at the end of his career. You run into people that have so many nice things to say about him. He impacted a whole bunch of people, and it’s been a great feedback with the relationship that teachers had here with him, and hopefully I can continue.”

Austin’s transition from teacher to administration provides insight on his father’s perspective of the school.

“We have more to talk about now,” Austin said. “He saw things from a different angle for the last 10 years, and I’m seeing things the way that he saw things. I think there’s some things we have to talk about, but I don’t think it’s any different when I was a teacher. I knew what was going on at the school, so we had an interest there.”

Now, while Austin fills his dad’s old role, Bruce is a full-time grandpa to Austin’s kids.

“He’s happy now because when I’m working events, then he gets to take care of my kids,” Austin said. “He gets to be grandpa right now. If I’m working late or my wife’s working late, he’ll pick the kids up at school. He says he’s no longer Mr. Coachman, he is Pops to everybody. That’s his new title.”

Austin asks his dad for advice as he learns everyday what his job entails.

“Someone who’s sat in this metaphorical desk for 10 years,” Austin said. “You’d be foolish not to [ask for help]. He’s really good. He takes emotion out of a lot of the questions and answers how he would do things. I don’t think there’s anything wrong with that. He’s always been my ally since I was a day old.”