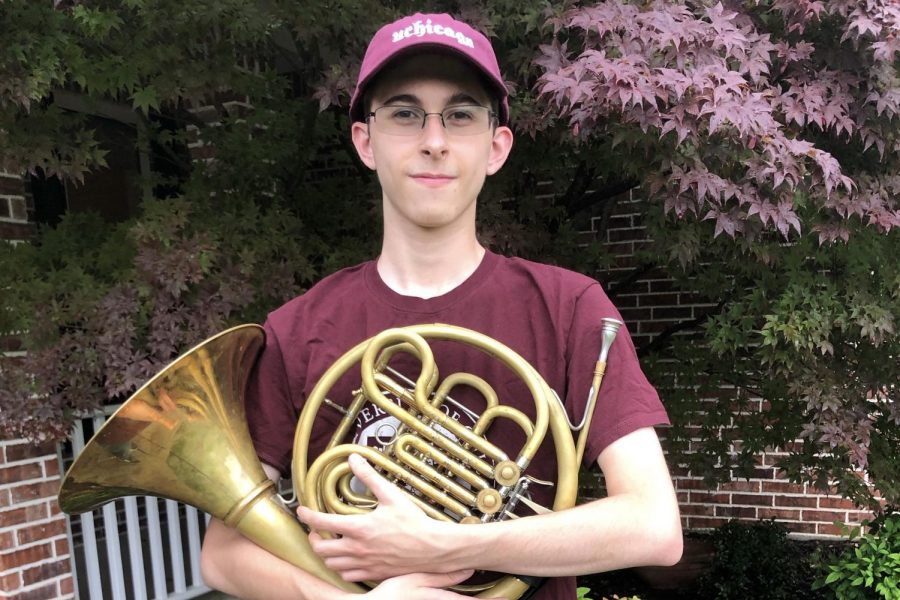 Senior Sam Lamping played the tuba in the band. Lamping will be attending the University of Chicago.

Senior Sam Lamping graduates and heads to the University of Chicago as a two time all-state band member on the french horn, a leader and national qualifier on the speech and debate team, a national merit finalist and a flash fiction writer.
At a Glance:
Favorite band song: “Armenian Dances” or “Elsa’s Procession to the Cathedral”

Favorite activity to do: Listening to music, specifically the band “Dawn Bomb”
Looking Deeper:
The Red Ledger: How would you describe what it is like being a two time all-state band member?

Sam Lamping: The first time was definitely more exciting and came with more perks with the TMEA (Texas Music Educators Association) which was a big convention, where I get to go to San Antonio and play with other all staters. That piece “Harrison’s Dream.” That was something. Also, being able to go out into the exhibition floor where all of these different people have set up booths in this massive room and being able to wander around and try out mouthpieces. Check out what it’s like to play a plastic french horn.

TRL: How did you become a national qualifier on the speech and debate team?

SL: Not everyone who performed in regionals for [Nationals] made it, but half the people, because it’s only like six people five people who actually were doing it in that round. That takes you to Nationals. This year, for whatever reason, I just needed to do decently well, which I did, I mean I think I did a bit better than decently well. But still, I made it, so that’s neat.

TRL: How did you become a leader on the speech and debate team?

SL: Essentially, freshman year, I was told what all the different events are, and I heard what informative speaking was. I was like ‘Oh, that sounds neat, I think I’ll do that.’ I liked it a lot, so I kept doing it. But apparently everyone else who did, didn’t like it that much, and so they just quit debate, or switch to a different event, and so it was basically just me and one other person doing speech events. I just got the position this year.

TRL: When did you find out you were a national merit finalist?

SL: They just sent me an email, they’re like ‘Hey congrats, given that you got the score and you’re still pulling strong in school, you have gotten the scholarship.’

TRL: Why are you going to the University of Chicago?

SL: My whole college list was basically determined on how well I think a college fits me, what I’m interested in, what I want to do, research opportunities and opportunities to play in the band. U Chicago for sure. Ever since, I first got those starting emails from them when the flood of emails was just starting to come in and all the colleges are like, ‘Sam, you have shown initiative in high school. We think you have a future. Insert college name here. Please apply.’ Then, U Chicago comes up and they’re like, ‘Hey, we’re gonna teach you about why this Greek historian talked about giant golden ants in his history books.’ Those really hooked me, and I didn’t even know at the time that it was this really prestigious university. I just like this college. I get it. It feels like somewhere that I want to go.

TRL: How do you feel about all of these accomplishments?

SL: I feel like these have arisen out of my personality and what I like to do. I found I like to tell stories. I like to write in general in narrative form. I like music in general, and the horn is my favorite instrument at this point all around. It sounds really nice. The desire to be good at what I like to do. I like learning, and I like learning about new things. I want to get better at all of this stuff whether it’s speech, band, writing, or being more knowledgeable. I want to get better at those things, and that’s what I’ve been doing.