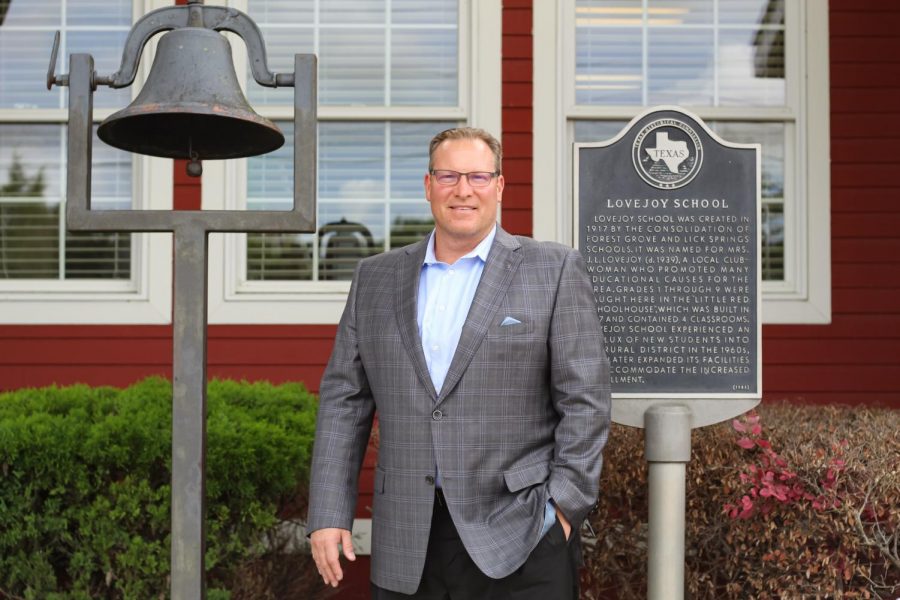 Board of Trustees president Chad Collins steps down after 10 years of service for the district. Collins will continue to serve for one more year.

Board of trustees president Chad Collins stepped down from his position on May 10 after five years of service. Collins will remain on the board of trustees for one more year, until the end of his term.

“It’s been an absolute honor and pleasure to serve the district in an officer role like the president of the district,” Collins said. “It’s been extremely rewarding to watch the fruits of the labor and the hard work pay off in our students.”

Collins attended Lovejoy Elementary School from kindergarten to sixth grade, and then attended Allen High School. He pursued a bachelor’s in business administration at Texas Tech and an M.B.A. in general management from Cornell University. Collins returned to the district in 2007 and was elected board of trustees secretary in 2011 after serving as the vice president of the Foundation for Lovejoy Schools.

“Chad is even-keeled and thoughtful,” SCIS teacher and former board member Ann Casey said. “He expresses his ideas, concerns and values clearly and logically. He treats others with respect and listens to their point of view. Chad’s warmth toward teammates, his constant focus on what is best for the students of the district, his attention to preparation and detail all lead to productive work around the board table.”

In 2016, Collins became the board of trustees president.

“Chad’s a wonderful person who has served our district selflessly for a long time, over a decade,” new board of trustees president Barrett Owens said. “He has seen us through some very changing times, and there’s probably not enough that can be said about the service he has put in for the betterment of our kids. He is definitely a leader, and has tried to put our kids ahead of all other decisions.”

Collins also meets with former Lovejoy alumni to hear what they are doing in their professional life.

“We have several [alumni] that have become lawyers, several that have become doctors, several of them that are major researchers,” Collins said. “We have entrepreneurs we get. There are so many that it’s really interesting to watch and see all the things that they’re producing.”

In his spare time, Collins also volunteers in the community. He is a Texas PTA honorary lifetime member and started coaching youth sports in 1998. He also fundraises for an organization that helps veterans who are disabled.

“Well, my dad was a disabled veteran,” Collins said. “I’m very passionate about recognizing their sacrifices and their family’s sacrifices. That’s important to me. I think there’s a need for raising funds for certain elements of taking care of our veterans.”

In the meantime, Collins will be training Owens in the position.

“I’m excited about it [the new position],” Owens said. “It’s an opportunity to put more of my service into serving our kids and really helping envision Lovejoy going forwards with new things. I enjoy the opportunity to do that, thankful for it, and I’m kind of excited about what we’re doing going forward as far as opportunities for our students, we really want to move the needle forward with new ideas and more.”