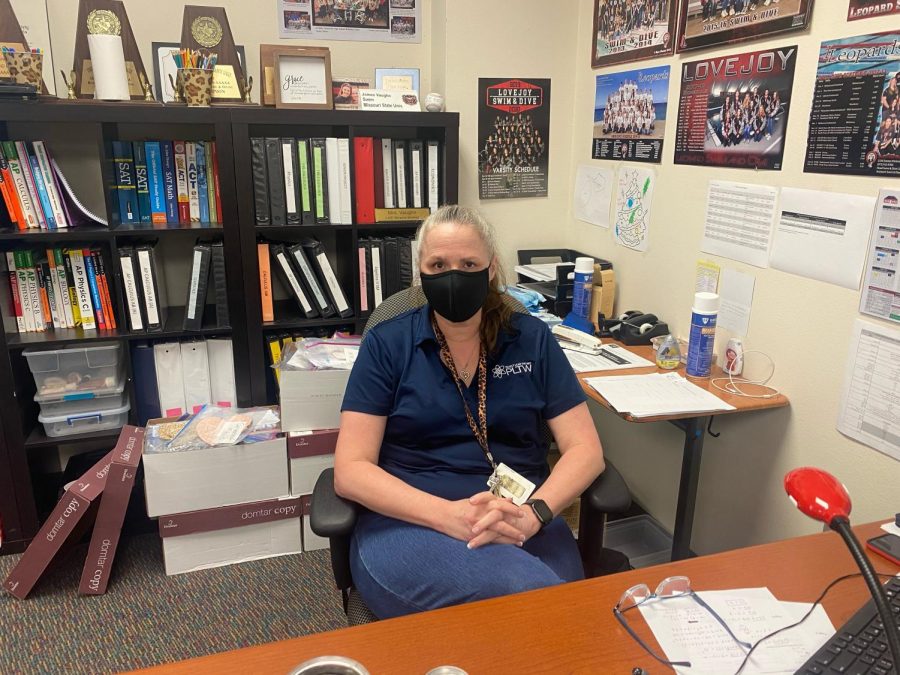 NHS sponsor and CAT teacher Tania Vaughn has taught for 27 years, having taught different types of math, CAT, and Independent Studies. Vaughn works with students to pass the eligibility checks for UIL and also helps with their work to ensure that they will graduate.

Grace was the word that was repeatedly uttered out of academic training coordinator’s Tania Vaughn’s mouth. So much so, she mentioned it five times in a 15 minute period. It was clear how important the word was to Vaughn. The word is not limited to verbal appreciation, rather a sign that reads the five letter word sits upright and sedentary behind Vaughn’s desk, and is a constant reminder of the actions that Vaughns strives to achieve in the classroom. A hard day calls for Vaughn to reach behind her, and situate the sign in front of her to the point where she can’t help but stare.

“Her message is about caring for kids and offering them grace everyday as a new day,” associate principal Teresa Dodson said. “She just wants us to love students everyday and forgive them.”

Vaughn received the secondary and high school teacher awards for the 2021 school year. For 27 years, Vaughn has taught everything from Algebra 2, college prep math and precalculus to CAT and independent study.

After an application process that included nominations, essays, resumes and final documentation, Vaughn was chosen to receive the secondary and high school teacher award.

“It was an honor to be recognized by [my] peers,” Vaughn said. “To be recognized for doing what I do is a great honor and makes me humble that people think of me in that way.”

Throughout the interview, Vaughn avoided phrases such as “best, better, or great.” Vaughn admits to being a teacher. Just that. No adjective in front.

“I know quite a few teachers that are just deserving or more deserving of the award,” Vaugn said. “They work just as hard as I do, if not harder with coaching and fine arts.”

So as the day grows tiresome and students fail to turn in their work, the sign that reads “grace” across it is gently repositioned directly in front of Vaughn’s vision.

“[Showing] grace looks like accepting that this is where a [student] is at and working to fix it,” Vaughn said. “You just have to move on and solve the problem at that point.”

Vaughn helped students back on the right path and gain eligibility to graduate.

“I have tried to be more of a mom figure to my students and show them how to be a good adult and apologize when they are wrong,” Vaughn said. “I make mistakes everyday, and I need to own up to my mistakes. I am a work in progress everyday, but do your best and realize you won’t be successful at everything but keep working and try new things.”

Vaughn’s son, James proves that his mom’s motherly instinct is not limited to the classroom.

“She has a motherly instinct to help everyone out,” James said. “It makes me proud that she doesn’t just  [help out] her kids, but all of her students.”

Vaughn admits it is hard to talk about herself as the interview concluded. As Vaughn writes her essays for the regional aspect for the awards, she asks herself the purpose of what she does.

“Growing up my dad always said don’t brag on yourself,” Vaughn said. “It is my job. I took that to heart.”