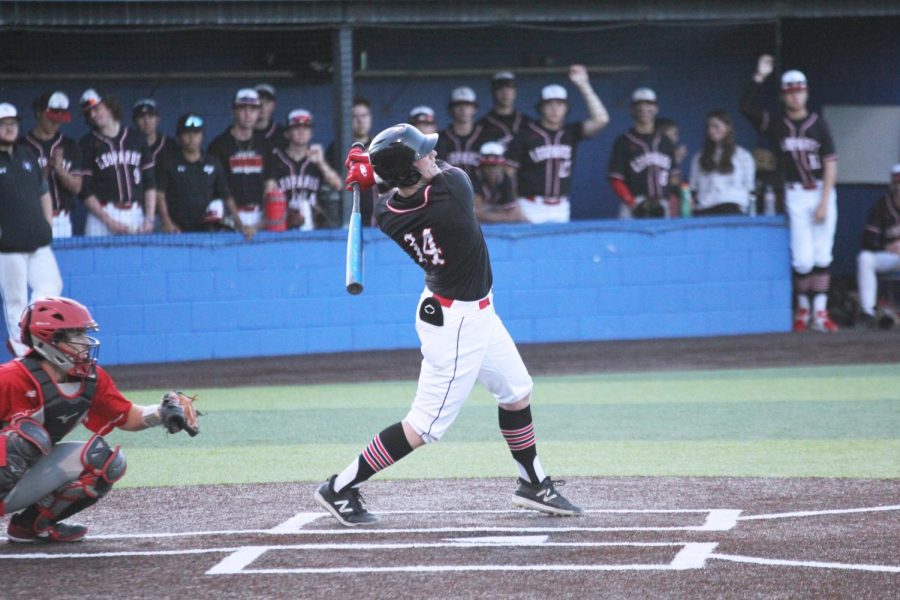 Senior catcher no. 14 Ralph Rucker hits the ball scoring a run for the Leopards. Rucker is a multisport athlete, also playing football.

The baseball team defeated Hillcrest with three doubles, finishing the game  2-0 and advancing the team to regional quarterfinals.

“On Friday, we played great defense under pressure,” sophomore center fielder Aidan Smith said.“We struggled hitting under their pitcher, who is a D1 commit.”

After losing the coin toss, the team played a one and done game against Hillcrest rather than a three game series.

“Going into the Hillcrest game was definitely nerve racking knowing that if we didn’t perform or execute our season would be over,” Smith said.

The game was tied 0-0 until the sixth inning when Leopards were able to take the lead 2-0.

“It took us some time but we broke through in the bottom of the 6th inning,” head coach Jason Wilson said. “We are built on strong pitching and great defense first and then rely on timely hitting (which is what we got).”

The regional quarterfinals will be a three game series against Prosper Rock Hill starting Thursday and ending on Saturday.
“In the games against [Rock Hill], I’m expecting a big playoff atmosphere and lots of crowds,” junior shortstop Kolby Branch said. “The whole series will be close games and a great rivalry series.”

The team defeated Rock Hill 8-2 and 2-1 during the district season.

“During districts we were able to defeat Rock Hill,” Smith said. “But, we have both improved since then, so we are going into these games knowing the competition will be tough.”

If the team defeats Rock Hill, they will advance to the semi-finals, and following that, the state championship game.

“Our mindset for finishing off the season is to stay focused and win at all costs,” Branch said. “We have come so far and want to finish out strong by giving each game our all.”