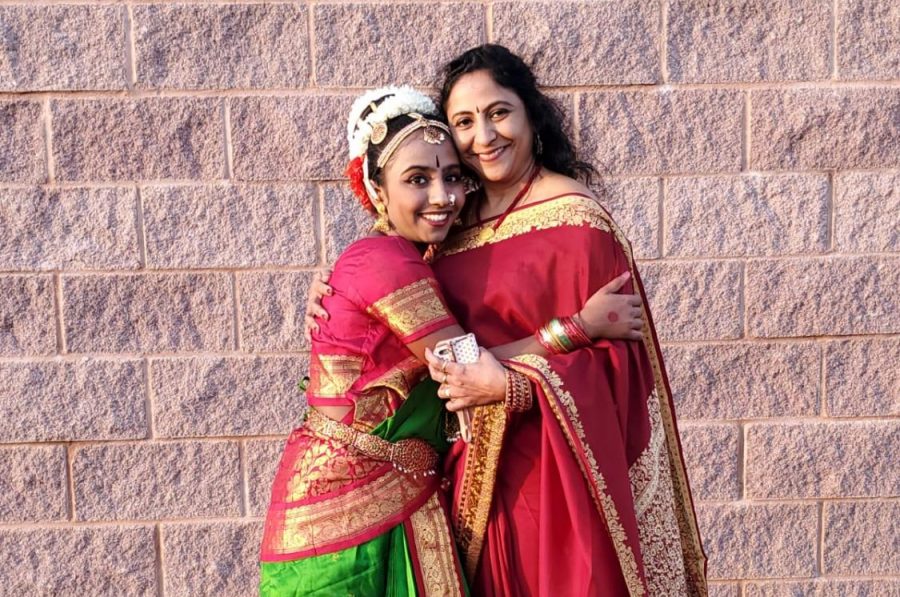 Junior Dinah Thadikonda and her mother Suma Joseph stands wearing a saree with her daughter Dina, who is wearing her kuchipidi dance costume. Joseph served in the Indian Navy and shared with Thadikonda lessons of trials she faced.

Indian men and women stand in rows dressed in white or black as the orange, white, red and green navy flag flutters above. Behind them, ships rest in the port and the smells of sea salt and iron travel in the air. It was 1994 when junior Dinah (Dinahsaur) Thadikonda’s mom, Suma Joseph, joined India’s Naval fleet. She directed flight paths and flight traffic over the sea through an intercom, telling the planes where they could land. By 2001, Joseph and her husband moved to the U.S.

The strict regiment and high expectations stuck with Joseph, along with the times she watched her dad teach children with parents in the navy through the KV Putnam program. This influenced the way she raised her children beginning in 2002 when Thadikonda’s sister was born. Thadikonda speaks with a prideful voice as she talks about her mom and the effects of her time spent in the Indian Navy.

With the sways to the classical Indian dance, the smells of curry spiced food and the non-existent sleepovers, Thadikonda and her family visit India every one to two years where they connect with their family in South India and visit the naval base where Joseph was based. When Joseph sees her old navy friends, she relaxes and smiles as they reminisce on the good times.

When Joseph shares stories of the good times in drills or hanging out with her course mates during her time in the Indian Navy, Thadikonda shines with pride, recognizing the gender norms Joseph had to endure.

“Go back to your own country”

Once Thadikonda was home, she talked with her mom who simply said to her, “No matter what you do, you’re not going to please anyone, so you just have to be you. You have to be proud of it. No matter what, hold your head high, do your honest work, never leave a job unfinished and always hold respect to others and yourself. And you’ll succeed in life.”

Thadikonda holds Joseph’s words close to her heart as she knows the trials her mom had to endure while she was in the Indian Navy, and the morals she gained to give to her children.