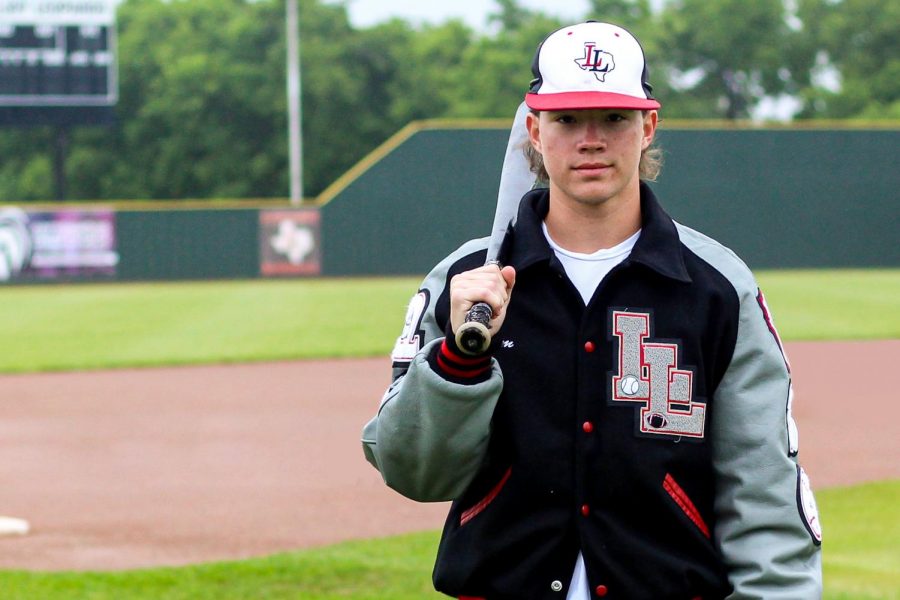 Junior Adam Eschler plays football as a defensive back and a baseball player as a pitcher, infielder and outfielder. Eschler has thrown 74 strikeouts this season and six wins. These stats putting him on the DFW leaderboard.

Dream Job: Medicine
Post-Game:
The Red Ledger: When did you start playing baseball? Why did you begin playing?

Adam Eschler: I started playing baseball at around the age of four. My dad was a baseball player throughout high school, and my older brother [has been] playing baseball for a few years now, so I was kinda forced to try it out. The first team I ever played was called “The Reds.” All the other kids were two years older than me, and I didn’t know any of them, but I found a way to like the game enough even with playing with a bunch of six year old strangers. I decided to play for one more [year]. After that year, I joined a select team called the Dallas Texans with kids who were only one year older than me now and played with the team for almost six years. That team is the reason why I kept playing. I grew really close with each teammate and parent, and they made me feel like I was a part of another family outside of the house.

TRL: If you could play any other sport than baseball and football, what would it be?

AE: I used to play basketball, but I quit in fifth grade because I just was not good at putting the ball through the hoop (the only objective of the game). But, the one sport I could see myself really succeeding in is tennis. My friends [and I] play tennis almost every weekend, and it’s a blast. It’s got the feeling of baseball with swinging a tennis racket and trying to hit it as hard as you can sometimes, and there isn’t as much running like track or even lacrosse. Another sport I might be interested in is golf, but the only problem is that I can’t get my ball from not slicing way to the right every time I play, so that’s why I would rather stick with tennis.

TRL: What is your favorite part about playing baseball? Why?

AE: Outside the teammates and the memories I make with them, my favorite part about baseball is the mental side of the game. I believe the mental part of baseball is the greatest thing in sports history. It teaches you patience, work ethic, [and] how to respond to failure and how to respond to success. In a game where failing 70% of the time gets you in the hall of fame, it is almost impossible to stay positive, but once you get that first hit, your confidence and ego go through the roof after seeing your hard work finally pay off.  Baseball’s mental part is the ultimate life teacher. While the game beats you so far into the dirt, and you think there is no return, it gives you a spark of hope, and you use that spark to motivate you to keep pushing and striving to become the best you can be.

TRL: What is your biggest memory of baseball in your high school career? Why?

AE: There are too many to count, and too many to name one my ultimate favorite memory. Most people would say “winning state” or “becoming a starter,” but for me, it’s about my teammates. All of the team dinners, after practice football games, and even tackle capture the flag in the snow after trying to clear the snow off the field, make up to be my favorite memories. The feeling that a high school baseball team feels when they are together cannot be matched by any other sport or any other event in this world, and it is a feeling I will forever carry on with me as I leave for college and after that. I will forever miss my teammates, and the bonds I have created with them. So in reality, my favorite memory of baseball, are my teammates.

TRL: Who are some of your biggest supporters in your career?

AE: My dad is my biggest fan and supporter and has been ever since I started playing baseball. He never allows me to settle for good enough and makes me always strive to be better than the day before. He always believes in me even when I find it hard to believe in myself. Without him, I would not be where I am today.

TRL: What is your strongest trait in your game? Why?

AE: My strongest trait is pitching, and it is because I have control of the pace of the game and ultimately the outcome of the game. Being a starting pitcher, the game rides on you. If you have a good game, you’ll most likely win, but if you have an off game and don’t perform well, then you will most likely lose. With me having the experience of pitching for 10 plus years and having the opportunity to be surrounded by professional pitchers, I have been able to learn what pitch I need to throw, at what location, and even at what effort level based on the batter I am facing.

TRL: What has been a reason for your success in baseball? Why?

AE: I can’t say anything without saying how much God had blessed me by giving some of the talents I have been given. My dad again is one of the biggest reasons why I am where I am. I think the biggest reason for my success is just simply wanting to be better. I have always had a dream to go play D1 baseball at an elite school ,and I have been given the opportunity to do so. Just striving for that dream of mine and never being satisfied is why I can say my dream is in grasping distance, and I won’t stop even after I achieve my goal.

TRL: What are your future plans outside of high school?

AE: College baseball is definitely an option for me. I will have my fair share of opportunities to go play at the next level, and I am excited and honored to have those opportunities. I also want to pursue sports medicine. I have had plenty of injuries, and I want to help kids who are going through injuries to get them healthy and back on the field.