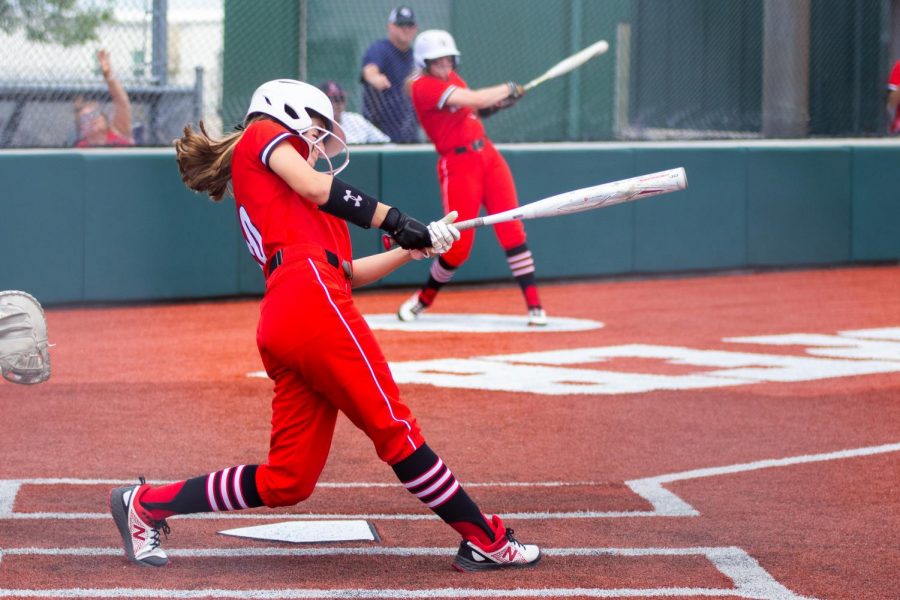 Freshman left fielder no. 10 Kamryn Messick swings to hit the ball. The Leopards won both of their area games against Creekview.

The varsity softball team swept Carrollton Creekview in a best of three series to claim the area championship.

“I felt great going into the series,” junior third baseman Emma Bittlestone said. “Our team was more than prepared for the round, and we were fired up to win.”

Throughout the series, sophomore Hannah Harvey went 6-7 at bat with two home runs, making her the Sports Day High School Player of the Week.

“This was probably the best series I have ever played,” sophomore second baseman Hannah Harvey said. “I felt confident and really zoned in especially at the plate.”

“I think our pitchers dominated throughout the series,” Bittlestone said. “Their performances were critical in our win over Creekview.”

Bittlestone was perfect at the plate in game two, going 2-2, and freshman Kamryn Messick went 2-3 in that game with two RBI’s.

“I feel like as a whole, our team’s performance was really good,” Harvey said. “Our bats were on fire this series, and our defense and pitching was a great collective team win.”

Sophomore Sydney Bardwell went 2-3 in game two with one RBI, and sophomore Naomi Pearson was perfect at bat in that game going 1-1 with one RBI.

“We all went out there ready to play,” freshman pitcher and shortstop Skylar Rucker said. “Every person on the team did something to help us achieve our goal of winning the series. I am very proud of them.”

The team plays in their regional quarter finals matchup against Frisco Heritage this week, starting on May 13 and going until May 15.

“I feel good going into this next series,” Rucker said. “I think if we work hard in practice all week then we should do great against Heritage. I have no doubt that we will win, and if we work hard and stay confident, we should be just fine.”