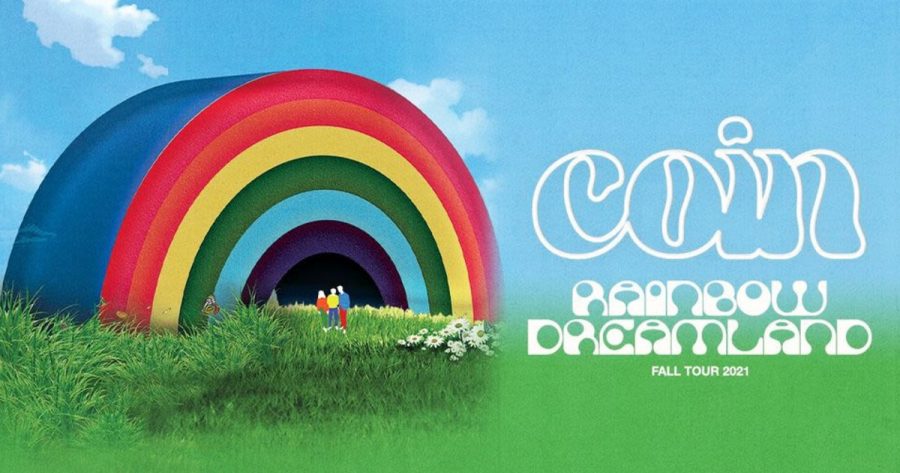 COIN released album "Rainbow Mixtapes" as a three part EP trilogy on Friday. TRL's Lindsey Hughes said that the songs could use "more creativity" and that the album isn't their "best work."

After the pandemic halted their 2020 “Dreamland” album tour, the alternative/indie band COIN released their fourth album as an EP trilogy called “Rainbow Mixtape.” The band released the first EP “Indigo Violet” in October last year, followed by “Green Blue” in March. The two EPs include the perfect mix of chill, indie music and the upbeat, pop perfection the band always gives their fans. While it might be obvious that the band broke their album down into colors of the rainbow, one might not know that the band aimed to represent the colors through their lyrical and sonic themes. Their most recent EP, the last of the “Rainbow Mixtape” was released on Friday with three new songs.

The first song, “Hypnotica” begins with a smooth, drum introduction, followed by a soothing first verse. The suspension and feel of the phrases makes for the perfect listen. Those listening should listen closely for background instrumentals and sounds adding the perfect details to the song. The only downfall of the song is the repetitive chorus, but that aspect doesn’t hold it back too much. I wish the band added a longer instrumental segment or a bridge with a build up to the final chorus. The song falls on the shorter side at three minutes and 12 seconds. It was a chill song to play in the background, but not my first pick to listen to intentionally.

Following “Hypnotica” is the song “Dream House.” The song starts with a unique beginning, with little background chords and an almost reminiscent lyric. Then, the song unexpectedly picks up with their typical drum up beat background. This song is the perfect example of how lead singer Chase Lawrence draws inspiration for his songs from dreams. While focusing on the music, there are a  few whistles in the background, adding a different twist. The best part that stuck out to me was the slight break between the first verse and the chorus, leaving listeners waiting for what is about to come. Behind the simple melody, lies a soft, whisper of harmonies. The strings in the background add a groovy feel to the song, contrasting the somber feel of the very beginning. The whistle then returns with a shaker noise, creating a very interesting bridge, different from many of their other songs.

The last addition to the recent release of the EP is the song “Different Moons.” This song is definitely slower than the others and almost sorrowful. It has a similar feel to one of their most popular songs “Malibu 1992,” with a feel of regret and remembrance to a past life. The vocals have a soft echo behind them, paired with the prominent guitar chords. The phrase “I wanna make it work” is repeated several times toward the end of the song, highlighting the overall theme of the song, changing from past experiences. As the phrase continues, the harmonies build off of each other, building up the listen before a soft fall as the song closes.

The three new songs on the album, as discussed, were quite similar to their past songs- some slower, some more upbeat. While I highly enjoyed the songs and would recommend them to anyone interested in alternative music, they were nothing new. They lacked individuality, and each one could have used more creativity, possibly longer verses and choruses. They were pleasant, like their other music, but I wouldn’t pick these songs out as any of their best work, like “Let It All Out (10:05) or “Sagittarius Superstar.” I enjoyed the song, but I would not agree with Lawrence when he says it is “one of the greatest albums” they have ever written.